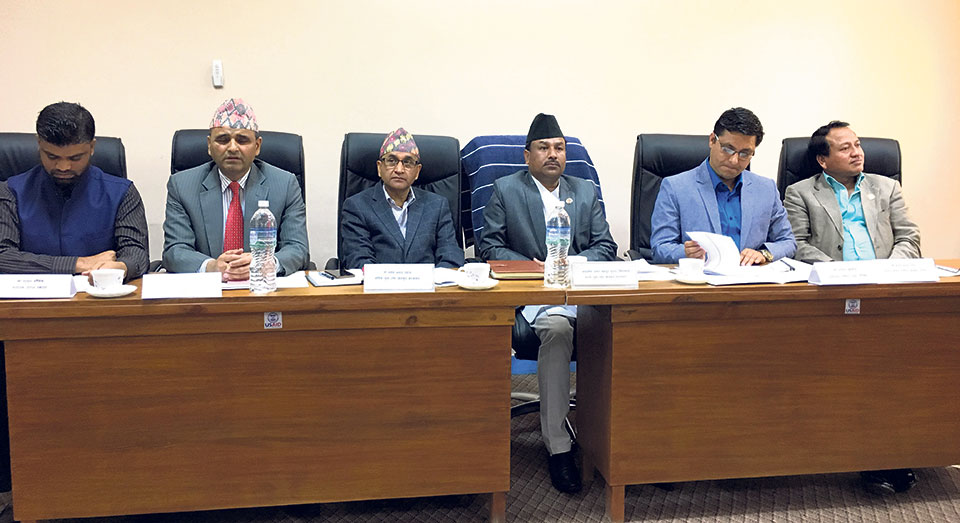 KATHMANDU, April 7: The Ministry of Youth and Sports unveiled a 37-point action plan for 100 days on Friday. The plan included the construction of infrastructure, settling disputes in sports association and the preparations for the eighth National Games to be organized in Nepalgunj in December and 13th South Asian Games (SAG) to be held in Kathmandu in March next year.

Speaking at a press meet organized in Kathmandu, Minister for Youth and Sports Jagat Bahadur Bishwakarma said that he is sensitive with the issue of the 13th SAG to be organized in Nepal.
Bishwokarma claimed that the government was more focused on result-oriented works rather than for quick popularity.

Noted officials present at the program included Secretary Mahesh Dahal, who was later on the day transferred to the Ministry of Labor and Employment and Member Secretary of the National Sports Council (NSC) Keshav Bist.

“We have a daunting task of restructuring the physical infrastructure that we have now and also the construction of other infrastructures which includes stadium and covered hall’s maintenance for the upcoming 13th SAG,’’ Bishwokarma said, “we have short time left for the preparations of SAG and this constraints may pose challenge in maintaining our international prestige. I am very serious with this issue on how to organize the 13th SAG on time.” He said underscored on the need of constructing the infrastructure using the limited time.

He further stated that the government has been searching a proper land to to construct an international level stadium and vowed to identity a venue in the next 100 days.
“We will construct a well-equipped stadium in Kathmandu. We will also construct a modern stadium each of the seven provinces. We will do our best to restructure the physical infrastructure that we have now,’’ he added.

Bishwokarma also said that resolving disputes in different sports associations is in the government’s priority issue. Biswokarma also vowed to take all initiatives to lift the ban on the Cricket Association of Nepal (CAN) imposed by the International Cricket Council (ICC).
Bishwokarma added that he is holding discussions with the stakeholders of the CAN and also with the ICC and that the talks were positive.

The Dhurmus-Suntali campaign which has announced to construct a cricket stadium in Nepal was also highlighted in the program. The Dhurmus-Suntali Foundation had announced to construct a stadium in the wake of Nepali cricket team securing an ODI status from the ICC World Cup 2018 Qualifier last month in Zimbabwe. Bishwokarma expressed his commitment to create a good environment for anyone wishing to invest in sports.

The minister who appreciated Dhurmus-Suntali Foundation for the showing interest to develop cricket stadium also expressed commitment to come up with a clear plan to help different local as well as foreign investors interested to invest in the sports sector in the country.

Bishwokarma said that the government will expedite the construction of Mulpani Cricket Ground. He added that the issue regarding the compensation for local land owners will soon be settled.
Bishwokarma also stated the plans of the government includes keeping records of the registration of the different associations under the NSC, formulating and revising the laws, amending the national sports policy, identifying and studying the place for the organizing of the high altitude sports activities and constructing sports stadium and universities, among others.

KATHMANDU, April 20: The Ministry of Industry has unveiled an ambitious plan with the promise of attracting foreign investment in... Read More...

KATHMANDU, Sept 13: The Health Ministry has forwarded an action plan for the establishment of medical college in all seven... Read More...