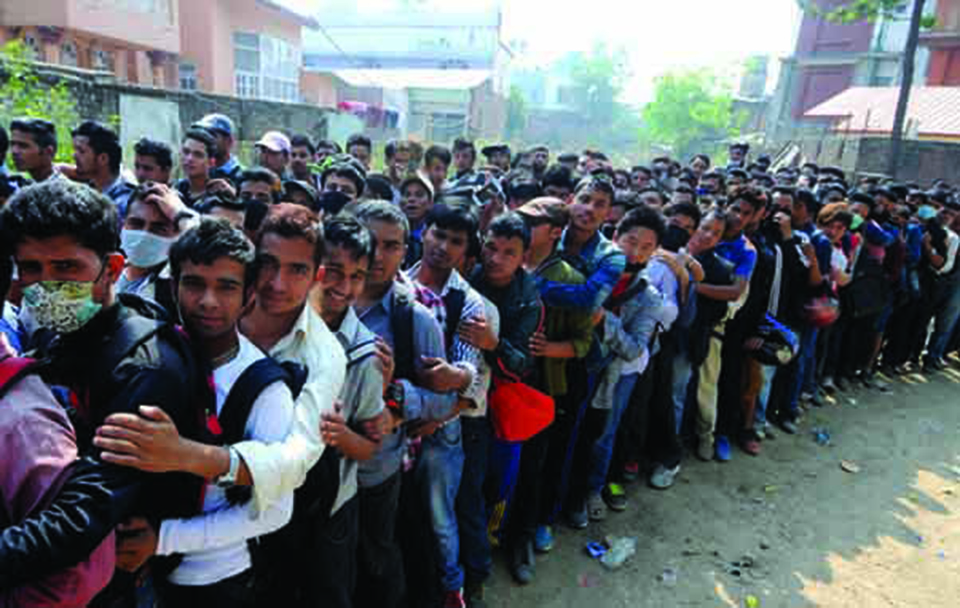 The author is former ambassador of Nepal to Qatar
news@myrepublica.com

Nepal faced a decade-long armed conflict starting from 1995, while it was already suffering from the vicious circle of poverty, unemployment, low income, low saving and low investment among other problems. The government was compelled to allocate huge amount of money for peace and security. Consequently, it lacked funds to make productive investment and create employment opportunities for people within the country. Foreign direct investment could not be attracted as well due to political instability. The practice of seeking employment in foreign countries started under this situation. Nepal started to send workforce formally to Malaysia and Gulf countries for employment in 1995.

At present, the number of Nepali migrant workers in these countries is over 3.5 million. And, about 1,500 youths between 20-30 years of age are migrating per day seeking for job opportunities. Of them, about 70 percent are unskilled, 27 percent semiskilled and three percent skilled. Though the unskilled workers become semiskilled on completion of their probation period, they are legally obliged to accept their initially agreed salary during the whole contract period.

The migrant workers send about Rs 700 billion remittance per annum. Their per capita remittance is the lowest of all in the world: Rs 200,000 only. Lack of skill, unsafe migration, delayed revision of minimum salaries and uneconomical lifestyle are the main cause of this.

That said remittance has also brought a lot of changes in the society as well as nation. It has not only raised the living standards of migrant workers’ family members but also increased the revenue of farmers, local labors and private schools, colleges, hospitals, money lenders etc. Its role in increasing the wages of local labors and the value of real estate cannot be denied as well.

In fact, remittance is the most important source of the foreign exchange reserves and the second most important source of the gross national income (after agriculture). Though the country’s import is 13.5 times higher than export, the balance of payment is still favorable mainly due to the remittance. The number of people below poverty line has decreased from 42 percent in 1995 to 21 percent in 2017, largely due to remittance.

Unfortunately, Nepali migrant workers suffer both within Nepal and in the destination countries due to unsafe migration and uneasy access to justice. Within the country they have to borrow loans from the indigenous bankers at three to five percent per month to pay the recruitment costs. Their recruitment agencies charge from Rs 80,000 to Rs 120,000 each by offering false promises regarding the companies, professions and salaries. They are provided with fake employment contracts just before their departure. They are deceived with the connivance of officials at the Foreign Employment Department and Immigration Department.

The Nepali missions abroad cannot protect their rights mainly because they have fake employment contracts. When they are returned to home country, they do not get justice here either. Unless Nepali missions abroad are solely authorized to attest employer institutions’ demand letters for Nepali workers and provisions relating to fines and penalties of the Foreign Employment Act are strictly implemented, migrant workers will not be safe at all.

The matter of grave concern for both sending and receiving countries is the rising death of Nepali migrant workers. According to the report of International Labor Organization (ILO), the death rate is 1.8 per thousand particularly in Malaysia and Gulf countries. Sudden cardiac arrest contributes to 45 percent of such deaths, road and traffic accident 25 percent, industrial accident 20 percent and suicide and others 10 percent. The dependents of the workers dying of sudden cardiac arrest and suicide are not entitled to any compensation from their employer institutions. The sending country issues work permit and the receiving country issues resident permit only when the workers are certified to be medically fit at home and destination respectively.

It is really surprising how the medically fit youths die of sudden cardiac arrest within their contract period of two years. Hence, both sending and receiving countries should undertake a thorough medical investigation jointly to find out the reasons for such deaths and their preventive measures. Further, receiving countries should make it obligatory for employer institutions to get their migrant workers insured for 24 hours, as they are legally bound to stay in their camps and work at their sites.

The side effects of foreign employment spread wide. With increase in the remittance, the agricultural and industrial productivities and export are decreasing while the import is increasing. As the remittance is swallowed up by the deficit balance of trade, the national economy is stagnant. The cases of illicit relation, abortion, divorce, suicide, drug addiction and family conflict and stress are increasing, as the migrant workers’ spouses are deprived of their physical relationships for a long time, children of their guardianship and parents of their physical support.

Foreign employment is neither an appropriate nor a permanent solution to the existing problems. Thus the government should immediately find its alternatives within the country. It should first maintain the peace and security, build rich infrastructures and develop the entrepreneurship in the people. Further, the private entrepreneurs and farmers should be duly motivated, protected, promoted and recognized. When we have peace and security, sufficient and cheap raw materials, human resources, electricity and water, rich infrastructure and open and liberal economy, foreign direct investment will be naturally drawn here.

With native and foreign direct investments combined Nepal will generate employment opportunities, increase GDP and tax revenue and make the balance of trade favorable, which will finally trigger social and economic change in the country.

The author is former ambassador of Nepal to Qatar