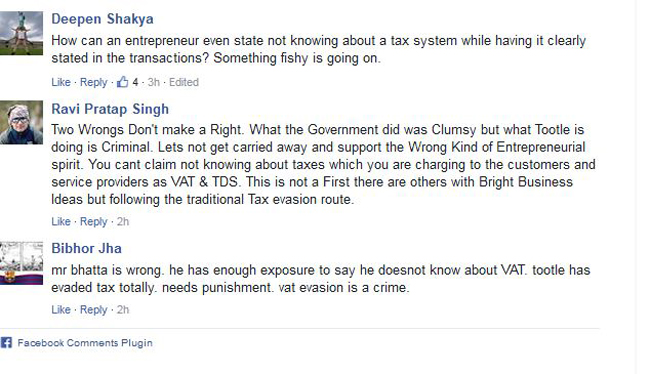 KATHMANDU, Jan 23: Tootle, a ride-sharing service provider, has faced strong criticism on social media after Wednesday's Republica revealed that the company was collecting 13 percent Value Added Tax (VAT) from riders for 19 months but without paying the tax to the government.

#Tootle could have been a success story in Nepal, breaking the transport syndicate. But we forgot that even entrepreneurs like @bhattasixit are produce of same system and are no different when it comes to acting illegally and evading tax. This is our #Nepal brothers. pic.twitter.com/WWLqb1lmtG

People from various walks of life of the society, mostly youths, took to Twitter and Facebook to vent their ire against tax evasion by Tootle.

Few days back @PM_Nepal had instructed the authorities "not to obstruct the operation of the ride service #Tootle." Did he say so just for popularity—without even a case study? If there was a study, the VAT evasion would not be missed. Good report @BikenDawadi ! https://t.co/0s4aArtPF0

Lashing out at the Tootle Company and its co-founder Sixit Bhatta, Twitteraties have questioned over the transparency of the financial transactions of company.

A Facebook user Sameer Joshi wrote "Tootle's commission is also too high... Tootle earning should not be above 20% of total bill, and Tootle & Partner should pay tax separately based on their income. However, Tootle is providing service the company should separate tax of both parties and pay to the government. This process increases the tax base when Tootle partners also pay tax "for their service'." 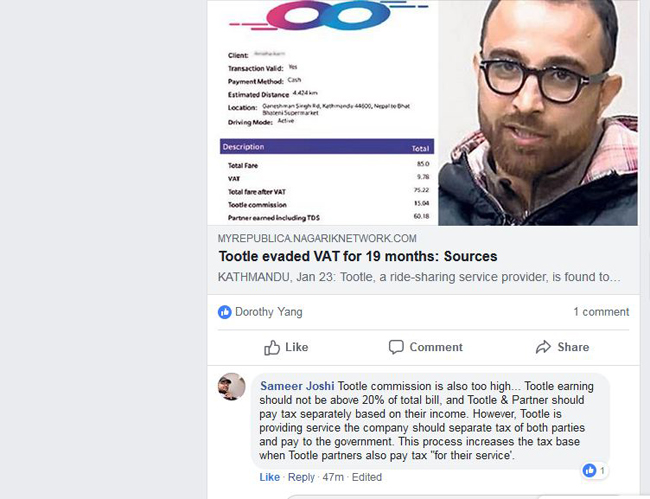 A Twitter user with handle KASHBAG‏ @KASHBAG writes: @bhattasixit I was not expecting #Tootle evading taxes (VAT & TDS). I withdraw my support to #Tootle until it settles the tax issues. 'Ignorance of law is not an excuse'!

@bhattasixit I was not expecting #Tootle evading taxes (VAT & TDS). I withdraw my support to #Tootle until it settles the tax issues. 'Ignorance of law is not an excuse' !https://t.co/eppfDoo9Qq

@bhattasixit you are not even registered with VAT !? and what happens to all the VAT we(riders) paid so far? #Tootle https://t.co/b8h5qpsnrc

According to sources, Tootle collected VAT from riders since its inception in January 2017 to July 2018. However, the company is found not even registered at the department concerned as a VAT paying company.

Sixit Bhatta, chief executive officer of Tootle, told Republica that the company is currently in the process of registering for VAT.

While startups are hard and profitability or break-even for #Tootle may not happen in near future, saying we didn't know we are required to pay VAT amount to govt is just feigning ignorance. After July, if they stopped collecting VAT, how does the deducted amount remain same?

I don’t think you should worry about being seen as a “big ugly” profiteer- yet @bhattasixit. People may be willing to give #tootle beneift of doubt.

But @arpanshr is right. Your company should immediately figure out what VAT was collected + what happened to it + how to refund.