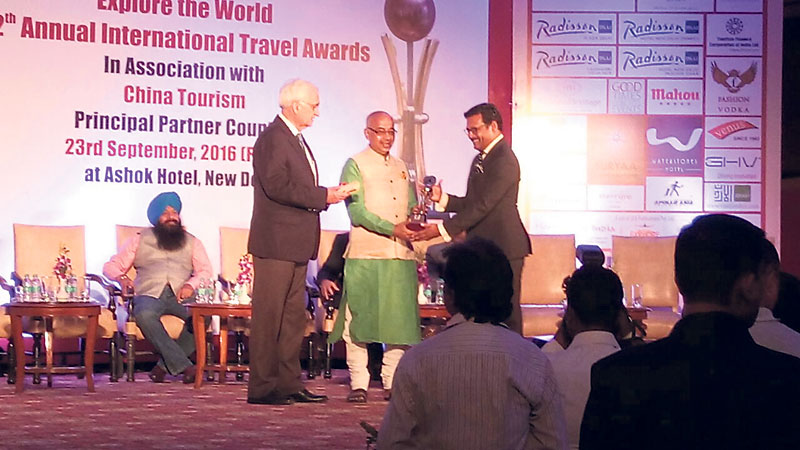 The hotel won the 'Most Preferred Destination for Business Meetings, Leisure & Celebrations' award, according to a statement issued on Sunday.

Vijay Goel, Minister for Sports and Youth Affairs, India and Salman Khurshid, Senior Parliamentarian, Ministry of External Affairs, India presented the award to Upaul Majumdar, General Manager of the hotel at the Ashok Hotel Convention, New Delhi, on Friday, according to the statement.

Mahesh Sharma, Minister of State of Tourism and Culture, India, was the chief guest for the ceremony.

The 12th Hospitality India & Explore the World Annual International Travel Awards function under DLK Publications Pvt Ltd, which caters to a wide array of segment like hotels, restaurants, aviation, railway, cargo and all those agencies that have a direct bearing on the fast flourishing hospitality industry.

"The vision of 'Hospitality India Annual International Awards' is to stimulate competitive spirit towards qualitative growth of the Indian hospitality that recognizes industry efforts that has been worthy to the cause," the statement said, adding that such recognitions also breed competition which results in the best services to the benefit of the end-users and redefines the degree of excellence in the industry, according to the hotel.

Our government was overthrown with the help of reactionaries: Oli
17 hours ago

Transport entrepreneurs demand refinancing and rescheduling of loans
5 minutes ago

Province Police collect over Rs 400 million as revenue from 7,384 cases
21 hours ago