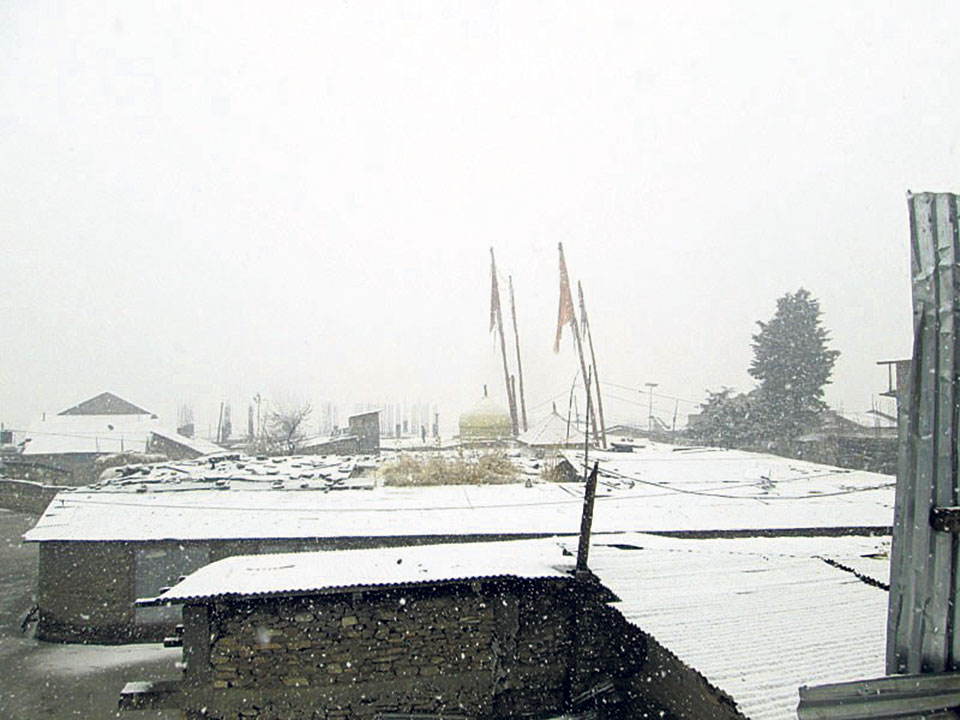 The famous Chandannath Temple of Jumla is covered in snow in this photo taken on Friday. Photo: Dhan Bahadur Budha/Republica

JUMLA, Dec 21: Tourist arrival in Jumla has come to a halt after heavy snowfall in the region earlier this week.

According to locals, it is difficult to reach the tourist destinations in the region, as the trails are slippery following the snowfall.

According to Nabin Sharma, spokesperson for Sinja Rural Municipality, though the government has announced the 'Visit Nepal 2020' campaign, the Karnali region will not be benefited from it. “There is no tourism-friendly infrastructure in Karnali,” he said.

The highway in Jumla is obstructed due to snow in the winter season. Likewise, roads are muddy in the rainy season. So, only a couple of months are suitable for tourist arrival in the region.

After the snowfall, the road connecting Rara Lake to Kalikot has become slippery, making it extremely difficult for tourists to reach the lake. As the roads in the region are not blacktopped, the number of tourists drops every year during the winter season.

According to Jibanta Rokaya, a local of the region, Jumla holds immense possibilities to attract a huge number of tourists every year, but the lack of proper infrastructure has hit the region's tourism sector.

Karnali Province government has a target to attract a total of 100,000 tourists in the region in 2020. The government has also identified several destinations for the 'Visit Nepal 2020' campaign.

Meanwhile, 13 locals who had gone to pick various herbs had gone missing amid heavy snowfall. After getting hit by heavy snowfall, they found a cave and were stuck there for 72 hours. Later, they left the cave for their destination despite the heavy snowfall.

Air services in Karnali disrupted due to snowfall