Smiling poop emoji takes over at first ever Emojicon 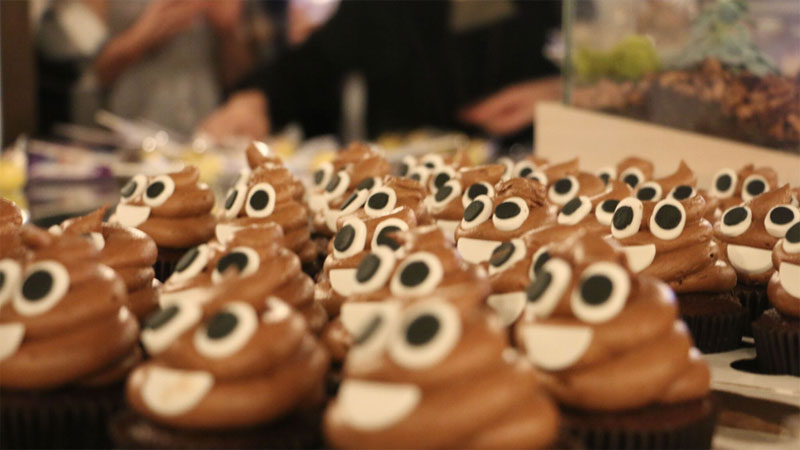 Emoji are having a moment.

The yellow smileys and prayer hands and grinning poop symbols may have worked their way into popular culture years ago, but the glyphs seem to have reached a new level of fandom and it was out in full force at Emojicon, a two-day conference dedicated entirely to all things emoji.

The San Francisco event, organised by a group called Emojination, is the first of its kind. Part silly fan event, part serious nerdery, Emojicon brought together people and organisations involved with all aspects of emoji from internet linguists to designers to members of the Unicode Consortium, the organisation that oversees “official” emoji creation.

The event kicked off Friday with a party at an emoji-filled coworking space turned party venue. The space was filled with balloons, overstuffed beanbags and emojis just about everywhere. Some attendees dressed as emoji characters.

The only refreshments served — mini burgers and pizza and cupcakes — were food and drink with an official emoji counterpart.

There were also contributions from corporate sponsors like Taco Bell, who rolled in its emoji-themed taco truck, and Panda Express, whose reps were serving orange chicken and noodles (which have close-enough emoji forms) and handing out chorks, the chopstick/fork combo utensil that is definitely not an emoji but hey, even emoji conferences have to pay the bills, right?

There were also emoji-themed activities like a photo booth, emoji caricatures and a balloon artists exclusively dedicated to balloons.

On Saturday, the more “serious” side of the emoji programming kicked off with a talk from Unicode co-founder Mark Davis.

Davis started his presentation with the Game of Thrones TV opening sequence depicted in emoji to show how deep the digital characters have proliferated popular culture.

Contrary to popular belief, emoji is not the only thing the Unicode Consortium does, Davis said. The organisation oversees roughly 120,000 characters and emoji make up a relatively small fraction of those at around 1,800.

The next round of new emoji will come out in June 2017.