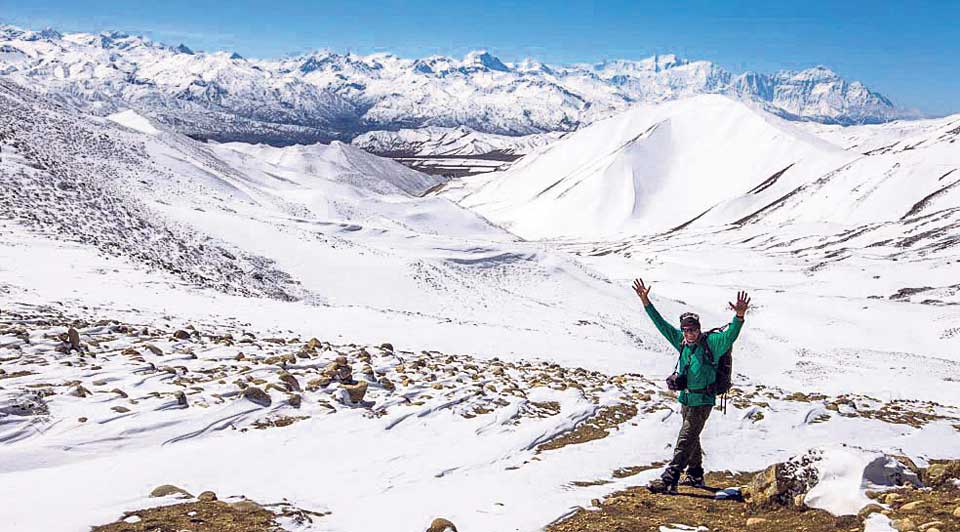 MUSTANG, Feb 23: With the objective of attracting adventure sports lovers from around the world, Himalyan Ski Trek is starting skiing training course on the slopes of the Himalayas in Mustang district from Saturday. The three-day training is expected to prepare many 'guides' who would facilitate tourists for this world famous mountain sport.

"Nepal has always been greatly loved for trekking and mountaineering,” said Suraj Gurung, training coordinator, adding, “Later, we offered sports like paragliding, rafting, bungee jumping and so on. We had not been quite able to start skiing though it is actually sought after by many tourists from around the world. Now, we are starting this too."

Due to the steep mountain terrains of Nepal, skiing can be both an 'extreme sport' and equally risky in Nepal, according to experts. If done with proper measures, this can be an unmatched experience.

According to Gurung, the three-day training will produce great ski players who can instruct, guide, and motivate ski enthusiasts.

"This is winter sport. If we can prepare local players or trainers, this would be more promising. In the Muktinath area, snow has piled up, we have chosen this spot for this event," Gurung stated.

Mustang and other Himalayan districts had received heavy snowfall in the past few weeks. According to the locals, the snowfall this time was much more compared to the last few years. This has not only delighted the farmers but also forced tourism entrepreneurs to take skiing more seriously.

"We have become quite excited about the snowfall in the hills since the last few weeks. The snow has not melted yet. Now, we are planning for the training," said Gurung.

Around 20 local boys are taking part in the training. Upon its completion, they would be handed over certificates which would allow them to guide others in the days to come.

"About 20 boys are getting the basic training, they are overjoyed," Gurung added.

Samir Thapa, who had received skiing training in the United Kingdom, is going to train the participants. Actually, the organizers had earlier considered a trainer from abroad. However, it took time to find one. "By the time we would find a foreigner, the snow could melt. So, now this training would be given by a Nepali trainer," said Gurung adding that better preparation would be done regarding training next time.

Just a few days ago, a skiing competition was organized in Muktinath area by Nepal Ski Association. The participants had competed in five different categories of skiing.

"We are going to organize training in the same spot," said Gurung. "There had been few such competitions in the past, but now with our own trainers we are developing Nepal as a new skiing destination," Gurung said.

According to Gurung, there snow deposited in the Muktinath area is four feet thick. Due to the excessive cold, few tourists have visited the area.

"Those who come exclusively for skiing would not be bothered by the cold. But normally, we get fewer tourists here when there is too much snowfall, rainfall or extreme cold," Gurung said.

"Once we are in a position to organize skiing in a more organized way, it would greatly expand our opportunities. This will bring in many tourists," he added.

Gurung is hopeful that skiing will attract both the domestic and international tourists. He expects a huge number of tourists from India and China.

Generally, a ski training is given for 10 days. But as the snow 'might not last that long', the training period has been shortened this time.

"We will be far better prepared next time. This is just the beginning," Gurung remarked.

Relief worth 4.9 million for affected farmers

KASKI, July 15: The Gandaki state government has provided relief support to the farmers of Mustang, who lost their cattle... Read More...