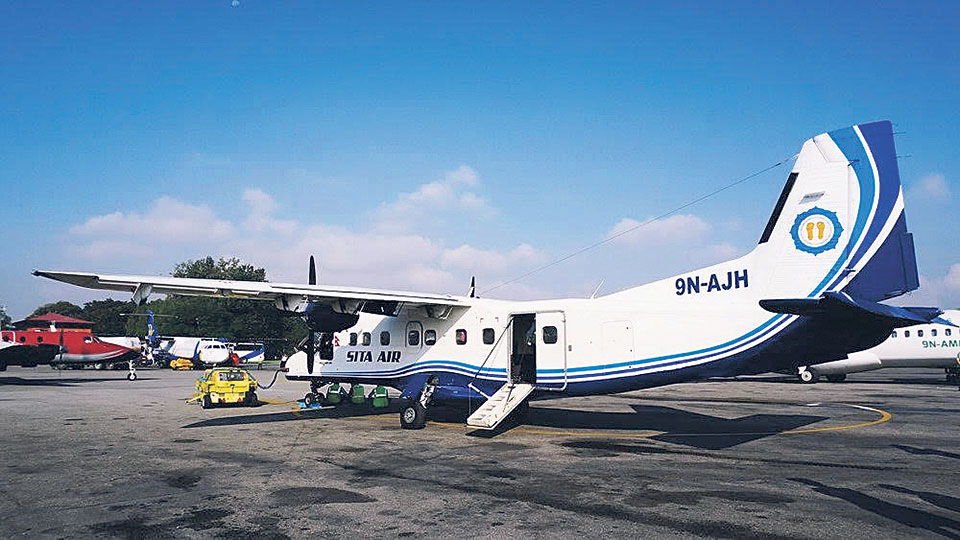 KATHMANDU, Feb 21: An aircraft of Sita Air, a private airline, made a safe landing at Tribhuvan International Airport (TIA) Tuesday after one of its engines had to be turned off. The plane had taken off for Lukla from TIA at 10:30 am, with 12 passengers  on board.

The 18-seater Dornier-228  had  a smooth takeoff. But 10 minutes before landing, the pressure parameter of one of the two engines indicated sudden low pressure, which meant  something was wrong. The fight duration from Kathmandu to Lukla is 30 minutes.

The pressure parameter is a device which indicates the status of the engines in the aircraft. If the parameter indicates  sudden low pressure, the affected engine needs to be shut down. The aircraft has to be landed as soon as possible on the remaining engine. Flying a plane with just one engine is very challenging and needs maximum caution, according to pilots.

The Lukla-bound plane was piloted by Senior Captain Rabin Gauchan and co-piloted by Subhash Panthi.  The pilots shut down the right engine and headed back  to  TIA . The two experienced pilots landed the plane without panicking the passengers.

“The plane landed successfully at TIA under the command of Senior Pilot Gauchan, who has flight experience of over one and a half decades. We feel relieved,” informed   Ghanashyam Acharya, senior general manager of  Sita Air .

According to Acharya, the aircraft started to develop trouble  when it was about to reach Phalplu. He said  the aircraft returned to Kathmandu even though Lukla was just  10 minutes away because Lukla airport is considered technically risky given the topography there.

MOSCOW, June 27: Two people were killed and seven injured when an Antonov An-24 passenger plane made an emergency landing... Read More...