Experience of Saving a Cat

Should we not be more compassionate to animals? 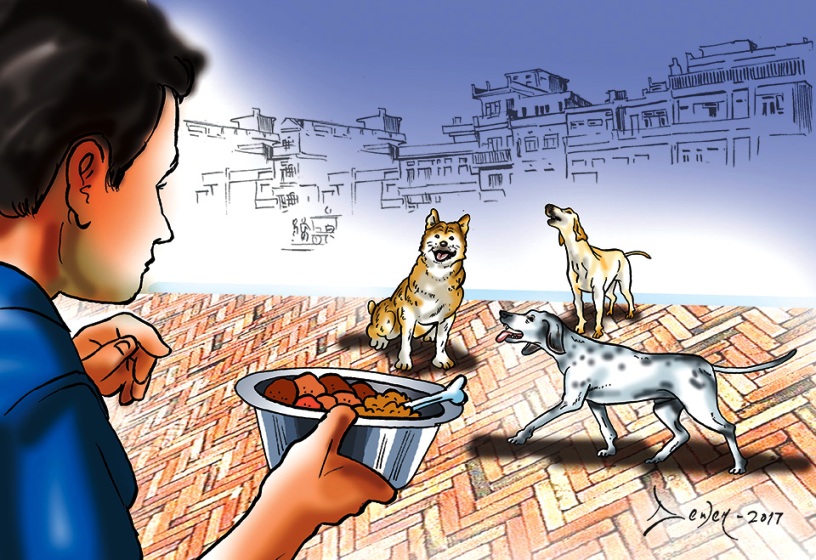 The writer is a 12 year-old student and is studying at the Rivers Academy School in west London. She can be reached at tiaacharya22@gmail.com
news@myrepublica.com

I recently traveled to Nepal for my summer holiday and it was an amazing trip. I learned so much about the culture, clothing, beliefs and the food. But there is one subject that has drawn my attention. Although many people might find this normal it certainly is injustice to me. Everywhere I go I see these poor street animals that are in a terrible state.

They are horribly skinny and are drinking dirty water trying to survive. Some of these poor animals have scars or are injured: speaking from my own experience. I had just returned from my cousin’s house and my mother was telling me about what she had seen as she returned from going out. She saw an injured cat outside the gates of my grandparents’ house.

The cat, which could barely walk, had its intestines spilling out of its stomach. His breathing was slow and half of its body was drenched with some kind of liquid, most likely blood. It broke my heart hearing this. Soon after, we heard a cat meowing in pain. It was so loud and painful to hear. I, my cousins and my mum went to investigate. We later realized it was another cat attacking the hopeless animal who was under a bunch of dried corn plants. My cousin chased the attacking cat and stayed to make sure he didn’t return.

We didn’t know what to do so we decided to call vets near us. No one picked up- but luckily an INGO located in Budhanilkantha called KAT (Kathmandu Animal Treatment center) was so kind and told us to bring the feeble cat in. Me and my cousins grabbed a box, clothes, and gloves to keep this cat safe in a box before we left for the INGO.

My mum carefully carried the cat and placed him in the box. It was only then we realized how many cuts he had on his body. We booked a taxi and went on a nearly an hour drive to save this cat. The poor thing was very tired and was sleeping in the car. Somehow, he knew we were saving him.

A spacious place for animals

The KAT Center was located on a hill full of forests and we had to read signs with directions for the INGO. It was really far away and in a very peaceful place. The place was big and it was perfect for animals. We met the lady we had talked to on the phone and she took us to the veterinarians. All the doctors were on standby -- ready to take care of the poor kitty. At first, they thought it was a car accident. After cleaning the wounds and shaving excess hair, the doctors came to a verdict that he could have been attacked by an animal, most likely a dog. Immediately, they performed surgery.

It was getting late so me and my cousins decided to book a cab and went home. Later on, my Didi went to visit the brave cat. He was okay but his back feet couldn’t move. They could have been paralyzed from the surgery or there could be some sort of injury. We have to wait till he is fully healed. I decided to name this brave, relentless cat Bahadur.

This precious cat will remain in my heart forever. The fact that animals can be in this type of danger is soul crushing. Does it not just break your heart?

However, it is not just that. There are public stories of animal abuse and murder. A recent one is the Juna Baram case (you may have heard of it). This is about a cruel woman who brutally killed a stray dog for biting her child. The CCTV footage showed that her child was teasing the sleeping dog. Out of anger, she used a sharp metal object, most likely a Hasiya (sickle) to kill the poor dog (Seti). This story makes me emotional just thinking about it. How cruel can people be? On top of that police refused to register any complaints against her saying that there were 'much more important cases than the killing of a dog!'.

Sadly, there is an actual law against animal abuse in Nepal. The Criminal Code Act 2017 states "No person shall subject any animal or bird to be tortured by beating or hitting it". A breach of this law could result in imprisonment for up to 3 months or a fine of Rs 5,000. If you kill a cow, you get 14 years in prison. We all worship the cow and have ‘Gai Tihar’ but don’t we have ‘Kukur Tihar’ (Festival of Dog) too? This is all injustice and aren’t cats, dogs, birds and other animals living things with feelings too? Over 100 road accidents involving animals happened in one year, all in Nepal. We can guess the number of injured or dead animals.

A neglected cause for NRNs

There are so many animal activists and charities that are fighting for justice for these stray animals who are starving, dying, injured, sick, diseased, and thirsty and struggling to take a breath. Luckily, there are some INGOs and shelters that are happy to take these animals in. They aren't enough to provide necessities for the dogs, cats and even goats, cows, chickens, birds that need help!

Non Resident Nepali (NRN) leaders spend their time meeting Prime Ministers, politicians, and other powerful people but none of them seem to be thinking about animals that actually need help.

No, we don't need to make a new building or tear down a shop or do this or that for the people. What about the animals who need new buildings, shelters for when it rains, food not some rubbish and scraps, water that is clean and not full of dirt and insects. Even now and then I see limping animals trying to walk and they are in so much pain.

Right now, I am asking for something simple. I know this won’t instantly go big but maybe just a little help from you could. If you could maybe start saving money for charities, or helping the animal rights activists it could make a change. Maybe host some charity events for these animals. If more people hear about this, maybe they could help to make shelters and vets. I want my voice to be heard in the role of 2nd generation NRN. The NRNs have been saving money to help humans. Why not save money to save other living mammals just like us.

“I tested negative after 16 days of isolation and treatment. On day 17, I was on the road feeding dogs.” Read More...

Saving street animals one at a time

We all love having pets at home. Be it dogs, cats or, if you are brave enough, even snakes, pets... Read More...

Over 10,000 people enter Nepal via Gaddachauki in a week for Dashain
11 hours ago

US Acting Assistant Secretary Trudeau in Kathmandu
12 hours ago