Several injured in Kashmir in clashes with Indian police 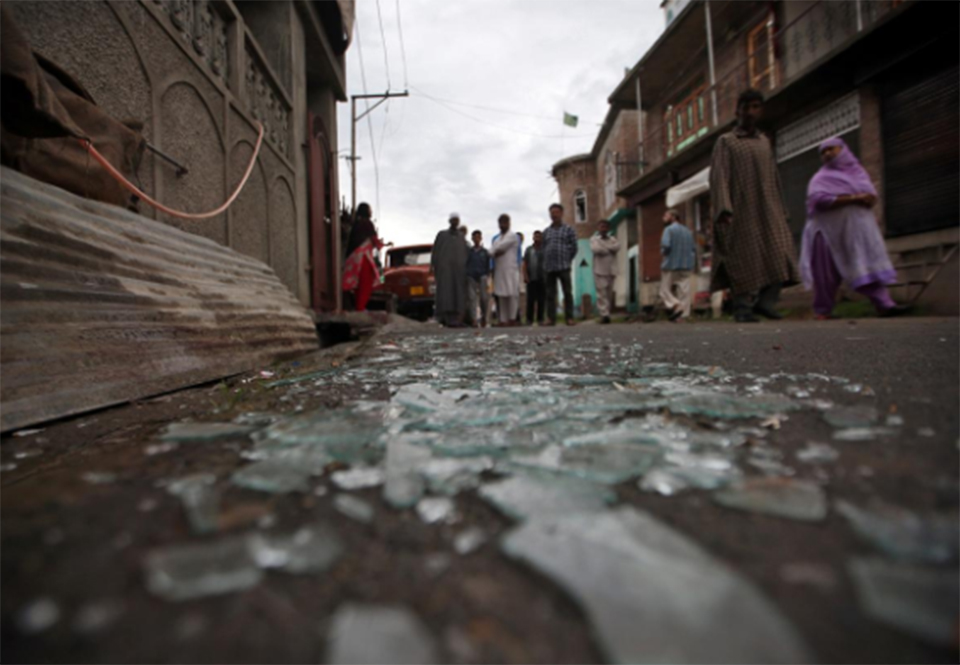 SRINAGAR, Aug 18: Indian security forces injured at least six people on Saturday in Srinagar, the main city in the Indian-controlled part of Kashmir, as several protests broke out against New Delhi’s revocation of the region’s autonomy last week.

In New York, the U.N. Security Council held its first meeting in almost 50 years on Kashmir, a majority Muslim region claimed by both India and Pakistan - which controls its western third. However, China, which also controls a small part of Kashmir, failed to secure a Council statement.

Some city residents said they had been assaulted or verbally abused and that security forces had caused damage as they raided homes after stone-throwing incidents in the past two days.

Jammu and Kashmir state officials and federal government officials in New Delhi did not respond to the allegations or give any estimates of the number of stone-throwing incidents, raids, arrests or injuries.

The state government said its spokesman Rohit Kansal had told a news conference in Srinagar that the situation remained “peaceful, with no untoward incident reported from the areas where relaxation was given in prohibitory orders”.

It was not immediately clear whether this included the areas of Srinagar where clashes took place on Friday night and Saturday.

Telephone landlines were restored in parts of the city after a 12-day blackout and Kansal said most telephone exchanges in the region would start working by Sunday evening. The state’s internet and cellphones remained blocked, however.

In addition, many of the region’s urban areas remained in lockdown, and more than 500 political or community leaders and activists remained in detention, some of them having been flown to prisons outside the state.

Six men from Srinagar’s Soura and Chadoora districts who were injured by pellets fired by security forces were treated on Saturday afternoon at the Sri Maharaja Hari Singh Hospital, two hospital officials said on condition of anonymity.

A spokesman said the hospital was “collecting information on the injuries”.

Among the victims was Gulam Rasool, who runs a shawl shop in the Alikadal area and was stepping out of his home when paramilitary troops hit him with at least 20 pellets, according to his son Naseer Ahmed, sitting by his father’s hospital bed.

Rasool lay staring at the ceiling in a blue ‘kurta’ shirt stained with blood.

In the Bemina area of Srinagar, at least a dozen witnesses said police and paramilitary officials had raided several homes on Friday afternoon, picking up at least six men and damaging houses with stones and rods.

Some people close to the area had hurled stones at security forces earlier in the day, the witnesses said.

Shahida, 25, said her husband Riyaz Ahmad Dar had been having tea on the first floor of their home when at least 15 police and paramilitary officials forced their way in, smashing ground floor windows and arresting her husband and his cousin.

In tears, she said her two-month-old son had been sleeping on the carpeted floor close to the window. “I grabbed him, but they beat my husband ruthlessly,” she said. “They sell crockery items - they are not stone pelters.”

Eighteen-year-old Simran Shahnawaz had a bandage on her toe where she said a police officer had hit her with an iron rod.

Her family pointed to broken cupboards and a shattered LCD screen, which they said had been smashed in the raid. “I can’t even tell you the kind of insults they hurled at us,” Shahnawaz said.

India has been fighting a revolt for 30 years in the part of Kashmir it controls, in which at least 50,000 people have been killed. Critics say the decision to revoke autonomy will cause further alienation and fuel the armed resistance.

The change will allow non-residents to buy property in Jammu and Kashmir, and end the practice of reserving state government jobs for local residents.

Prime Minister Narendra Modi’s government has said the measure is necessary to integrate Kashmir fully into India and speed up its development.

The move has raised tensions on the heavily militarized border between the Indian- and Pakistani-controlled parts of Kashmir. An Indian soldier was killed in cross-border firing on Saturday, according to a report from Reuters’ partner agency, ANI. The Pakistan military had said three of its soldiers had been killed on the border earlier in the week.

BARAMULLA, Aug 15: My car moved within a column of Indian army vehicles and a cloud of dust. On a... Read More...