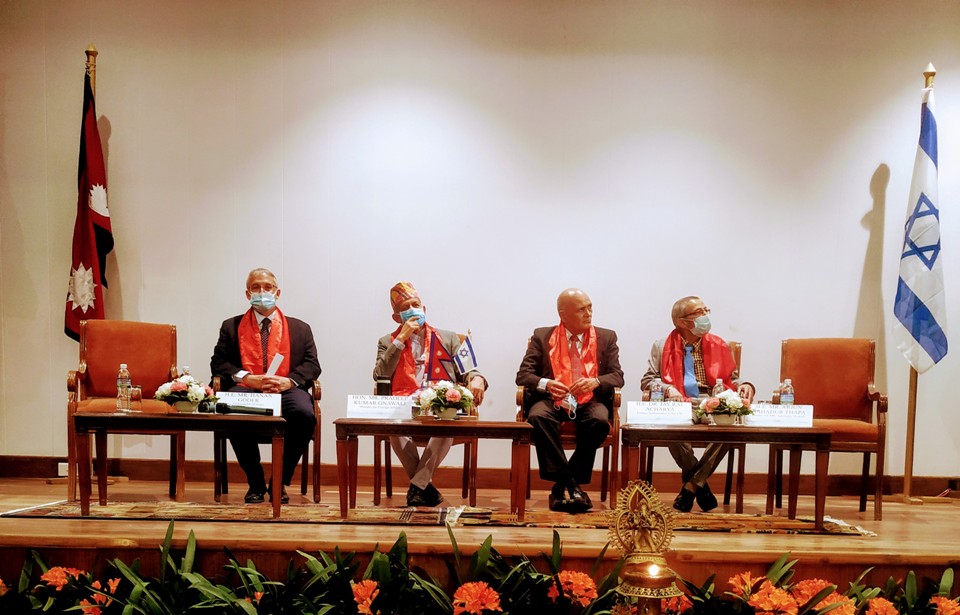 KATHMANDU, March 19: The Embassy of Israel together with the Center for Diplomatic Dialogue (CeDiD) organized a seminar on “6 Decades of Nepal-Israel Relations” on Thursday coinciding with the 60 years of establishment of diplomatic relations between the two countries.

Addressing the event, Minister for Foreign Affairs, Pradeep Kumar Gyawali recalled that Nepal was the first country in the South Asia region to formally recognize the State of Israel by establishing diplomatic relations and hosting Israeli Embassy in Kathmandu.

The foreign minister said that bilateral relations between the two countries have continued to flourish over the years. "We have continued to cooperate and collaborate on various areas of mutual interests at the bilateral as well as multilateral levels. This milestone in our relationship has inspired us to contemplate and take further steps to strengthen and consolidate friendly ties between our two countries and peoples through increased level of engagements and by exploring new avenues of cooperation. I express my confidence that Nepal-Israel relations will continue to strengthen and expand in the days ahead," he said.

During the ceremony, Hanan Goder, Ambassador of Israel to Nepal, said that relations between countries stand on two legs: excellent bilateral leg and the multilateral leg, which is less famous, less known and has much lower visibility. "The multilateral relations take place mainly in the UN building in New York and in the Human Rights Council in Geneva, and sometimes in other locations. It is time that both bilateral and multilateral levels are also reflected in the voting pattern of Nepal at the UN as well as other global forums," he said.

Dr. Anjan Shakya, Ambassador of Nepal to Israel, addressed the event virtually highlighting the bilateral relations and cooperation between the two countries.

Tal Shvartsman, deputy chief of mission at the embassy, highlighted strong cooperation between the two countries since the 1960s in major sectors such as agriculture, education and health, among others.

"The seminar provided an opportunity to commend the existing bilateral ties and invited us to reflect on the possibilities of improving multilateral relations between our two nations. This is one of the major events that were organized during the year to celebrate 60 years of the establishment of diplomatic relations," the embassy stated in a press release.

Madhav Nepal is not on right path: Bagmati CM Shakya
17 minutes ago
Current govt is an alliance of greedy sinners: Rayamajhi
44 minutes ago