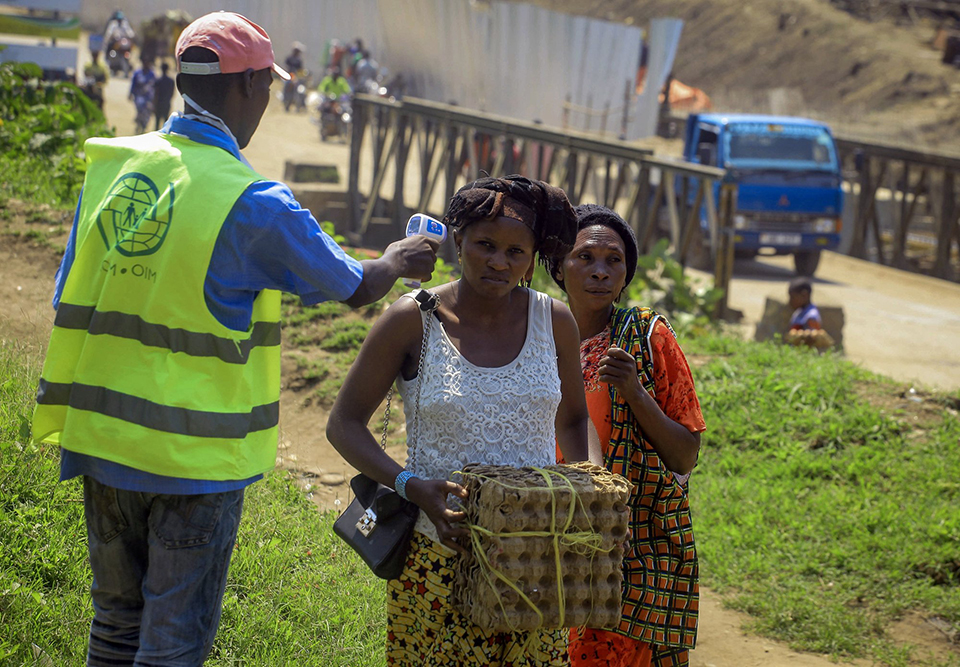 People crossing the border have their temperature taken to check for symptoms of Ebola, at the border crossing near Kasindi, eastern Congo Wednesday, June 12, 2019, just across from the Ugandan town of Bwera. In Uganda, a 5-year-old boy vomiting blood became the first cross-border victim of Ebola in the current outbreak on Wednesday, while two more people in Uganda tested positive for the highly contagious disease that has killed nearly 1,400 in Congo. (AP Photo)

KAMPALA, June 13: A second person infected with the Ebola virus has died in Uganda, the health ministry said Thursday, after a family exposed to the disease quietly crossed the border from Congo.

The first cross-border cases in this Ebola outbreak — the second-deadliest in history — have prompted a World Health Organization expert committee to meet on Friday to discuss whether to declare a global health emergency . Such declarations almost always boost attention and donor funding.

Uganda health ministry spokesman Emmanuel Ainebyoona confirmed the death of the 50-year-old woman overnight. Her 5-year-old grandson was the first confirmed death from Ebola in Uganda on Wednesday. The boy’s 3-year-old brother also is infected.

Congo’s health ministry said all members of the Congolese-Ugandan family have agreed to be repatriated to Congo for experimental treatments as part of clinical trials. There is no licensed treatment for the virus which can spread quickly via close contact with bodily fluids of those infected and can be fatal in up to 90% of cases.

More than 1,400 people have died in this outbreak declared in August in eastern Congo, one of the world’s most turbulent regions, where rebel attacks and resistance by community members wary of authorities have badly hampered Ebola containment work.

For months, officials have feared the virus would cross the heavily traveled border where health workers have been screening millions of people for fever and other symptoms. Uganda, Rwanda and South Sudan have been preparing for possible cases.

The family’s case shows the challenges in tracking those infected in an outbreak where an alarmingly high percentage of cases aren’t discovered until it is too late. Doctors Without Borders last month said as few as a third of new confirmed Ebola cases were linked back to known contacts of infected people.

Authorities on Wednesday said the family had traveled from Uganda to Congo because the boys’ grandfather was ill. WHO said he died of Ebola, and officials believe those who mourned him became infected, too.

While returning to Uganda, the group including several other children was stopped at a Congolese border post. A dozen members of the group already showed symptoms of Ebola. While awaiting transfer to an Ebola treatment unit, six family members slipped away and crossed into Uganda on an unguarded footpath, authorities told The Associated Press.

Authorities in both countries now vow to step up border security.

Uganda has now identified seven suspected Ebola cases, and about 50 contacts of the family are being traced there. Five family members who did not cross into Uganda have tested positive for Ebola, Congo’s health ministry said.

Health teams in Uganda “are not panicking,” Henry Mwebesa, the national director of health services, told the AP on Wednesday. He cited the East African nation’s experience battling previous outbreaks of Ebola and other hemorrhagic fevers.

This outbreak “is not going to go beyond” the boy’s family in Uganda, he added.

For the first time an experimental but effective Ebola vaccine is being widely used, with more than 132,000 in Congo receiving it. Uganda is more stable than eastern Congo, and it has vaccinated nearly 4,700 health workers. WHO is shipping another 3,500 doses this week for health workers and contacts of those infected.

NC will join the govt if the party is given Home Ministry: Shashank Koirala
22 hours ago

‘Trust deficit’ forces Maoist Center to distance itself from UML on election to new President
11 hours ago
Two injured as a man tries to self-immolate in Pokhara, woman's condition critical
3 hours ago

Cement production cut down by 70 percent
9 hours ago

Demand for resignation of CAN executive committee
2 hours ago
Two injured as a man tries to self-immolate in Pokhara, woman's condition critical
3 hours ago

Rabi Lamichhane was sued to change the balance of power: Pokharel
3 hours ago