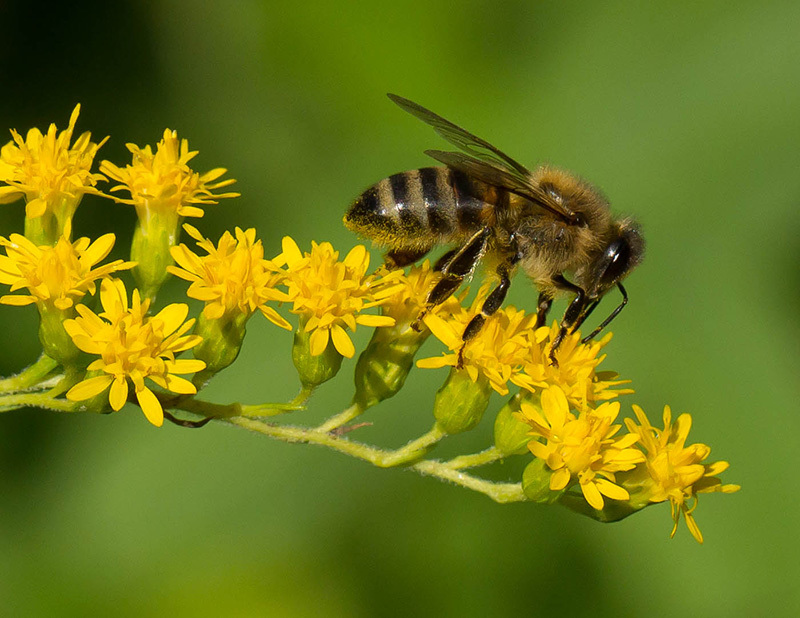 A new, comprehensive report from European scientists confirms what many researchers have already been warning about: a class of pesticides called neonicotinoids poses a danger to wild bees and managed honey bees. The report analyzed over 1,500 studies on the issue.

"This report certainly strengthens the case for further restrictions on neonicotinoid use," entomologist Dave Goulson of the University of Sussex in Brighton, U.K., said in a statement.

Bees are going through a dramatic decline. Global populations are dwindling, we don't know why, and we're not exactly sure how to stop it. But more and more evidence is mounting that this is connected to neonicotinoids, the world's most popular class of insecticides.

Neonicotinoids (also called neonics) are used to coat seeds to protect them when they are sown. They're essentially nerve agents. When the seed germinates, it spreads the pesticide throughout the plant, protecting it entirely from pests. But the substance also spreads through the pollen and nectar, where it can be absorbed by unfortunate pollinators - particularly, bees.

Many studies have linked neonics to honey-bee colony collapse disorder (CCD) and a decline in birds due to a reduction in insect populations. Pesticide producers have contested the studies, however, saying that they are inconsistent and unrealistic. The new report found that most of the damage doesn't necessarily come through the nectar and pollen directly, but rather through secondary soil and water contamination. The pesticides are spreading through the entire ecosystem, where they are causing widespread damage. While there was some variability in the study, the results were conclusive enough to support a total ban on these pesticides.

"There is variability in the conclusions, due to factors such as the bee species, the intended use of the pesticide and the route of exposure," said Jose Tarazona, head of the European Food Safety Authority's pesticides unit. "Some low risks have been identified, but overall the risk to the three types of bees we have assessed is confirmed."

Furthermore, as the neonics spread and seep through the ecosystem, it's only a matter of time before pests start developing resistance, Christopher Connolly of the University of Dundee School of Medicine in the United Kingdom noted in a statement.

The study only analyzed the impact of three neonicotinoids - clothianidin, imidacloprid, and thiamethoxam - all of which have been banned in the European Union but are still allowed widely used elsewhere in the world, including the US. The European Commission has proposed extending the ban to all pesticides in this class, but such measures haven't been adopted thus far.

"This is strengthening the scientific basis for the Commission's proposal to ban outdoor use of the three neonicotinoids," according to a commission statement.

The harms of generalizing

Often times, in a conversation, a generalization or a stereotype becomes a way of comic relief. For instance, whenever you... Read More...

LONDON, July 18: In a first, scientists from Queen Mary University of London (QMUL) have made an object disappear by... Read More...