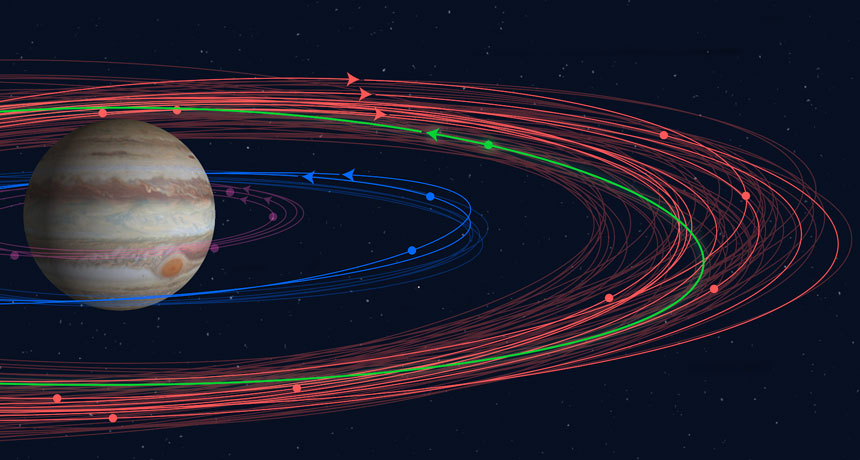 Scientists have discovered twelve new moons orbiting Jupiter, bringing the total number of natural satellites circling around the king of planets to a whopping 79. The findings include 11 “normal” outer moons, and one that scientists call an “oddball.” Researchers, led by Scott S Sheppard from Carnegie Institution for Science in the US, first spotted the moons in last year while they were looking for a possible massive planet far beyond Pluto.

“Jupiter just happened to be in the sky near the search fields where we were looking for extremely distant Solar System objects, so we were serendipitously able to look for new moons around Jupiter while at the same time looking for planets at the fringes of our Solar System,” said Sheppard. “It takes several observations to confirm an object actually orbits around Jupiter. So, the whole process took a year,” said Gareth Williams from the International Astronomical Union.

Nine of the new moons are part of a distant outer swarm of moons that orbit it in the retrograde, or opposite direction of Jupiter’s spin rotation. These distant retrograde moons are grouped into at least three distinct orbital groupings and are thought to be the remnants of three once-larger parent bodies that broke apart during collisions with asteroids, comets, or other moons.

The newly discovered retrograde moons take about two years to orbit Jupiter. Two of the new discoveries are part of a closer, inner group of moons that orbit in the prograde, or same direction as the planet’s rotation. These inner prograde moons all have similar orbital distances and angles of inclinations around Jupiter and so are thought to also be fragments of a larger moon that was broken apart.

These two newly discovered moons take a little less than a year to travel around Jupiter. “Our other discovery is a real oddball and has an orbit like no other known Jovian moon. It’s also likely Jupiter’s smallest known moon, being less than one kilometer in diameter,” Sheppard explained. This new “oddball” moon is more distant and more inclined than the prograde group of moons and takes about one and a half years to orbit Jupiter.

So, unlike the closer-in prograde group of moons, this new oddball prograde moon has an orbit that crosses the outer retrograde moons. As a result, head-on collisions are much more likely to occur between the “oddball” prograde and the retrograde moons, which are moving in opposite directions. “This is an unstable situation. Head-on collisions would quickly break apart and grind the objects down to dust,” said Sheppard.

It’s possible the various orbital moon groupings we see today were formed in the distant past through this exact mechanism. The team think this small “oddball” prograde moon could be the last-remaining remnant of a once-larger prograde-orbiting moon that formed some of the retrograde moon groupings during past head-on collisions. The name Valetudo has been proposed for it, after the Roman god Jupiter’s great-granddaughter, the goddess of health and hygiene.

Can’t concentrate? Scientists say you should drink some water

Ever have one of those days where you just can’t focus on anything? ... Read More...

The breakthrough, spurred by the discovery of plastic-eating bugs at a Japanese dump, could help solve the global plastic pollution... Read More...