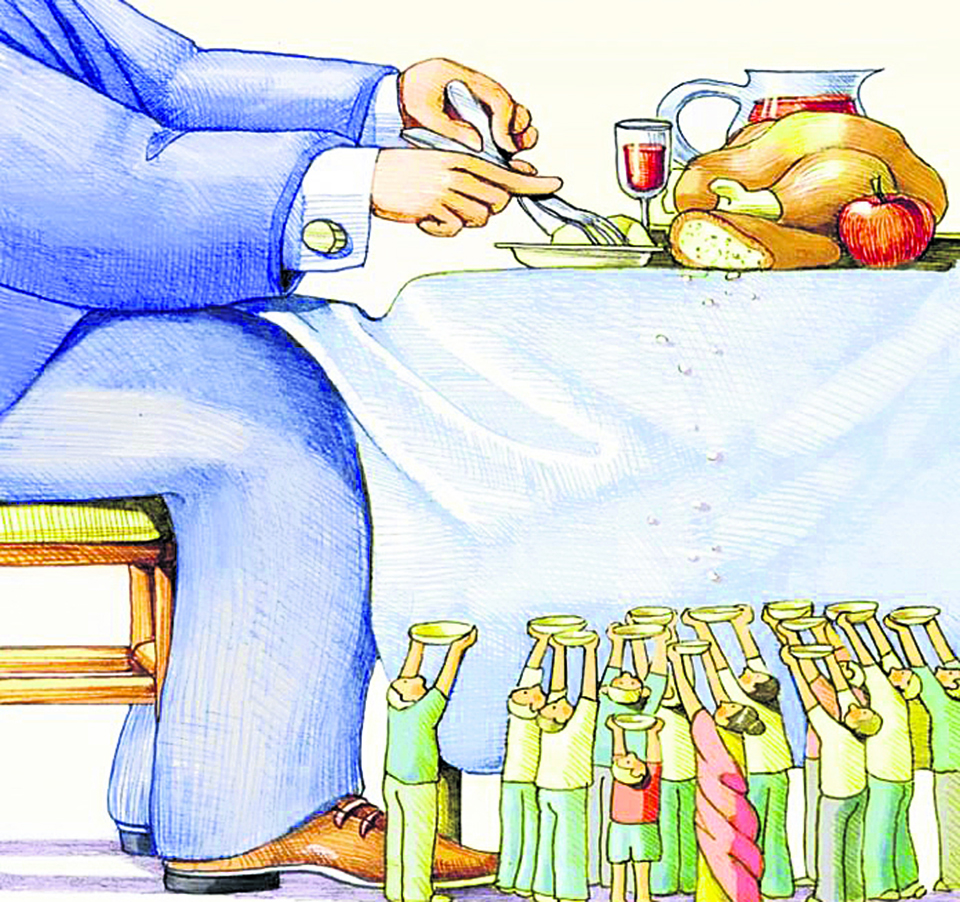 This country is going to the dogs and, if anyone needed any convincing, then a brief glance at the news over the past year ought to do it. Our news feed seems to be filled with a never-ending assortment of scams. Over the past week it has been all about land – from the Lalita Niwas land scam to the blatant appropriation of public space at Khula Manch.

If we jog our memory a little further back, it was the encroachment of Fewa Lake and the dubious goings on vis-a-vis the land of Tribhuvan University that was in the news. The common denominator in all of this is the fact that these scams and land appropriation schemes are perpetrated by the ‘politico-business-bureaucratic’ nexus that seems to be just about everywhere. Governments may come and go but, with small variations in their makeup, this trilateral quid pro quo remains as strong as ever.

Take for example the load shedding that we suffered through for so many long years. A huge part of that was due to the fact that NEA officials (and the ministry at large) were ensuring constant supply of power to certain industries and businessmen in return for kickbacks. In the aftermath of Kulman Ghising’s course correction, no action was taken against any of these industries/businessmen or any of the honchos of NEA. As a matter of fact, I can’t recall it even entering the public discourse when it should have been of the utmost concern, given that the actions of these industrialists and bureaucrats helped propagate the ecosystem that literally kept the public in the dark for all those years.

Such is the all permeating and complex web of sycophancy within the nexus that nothing will be done about any of these culprits in the long run. It is why “businessmen” like Manoj Kumar Bhetwal of Jaleshwor Swachhanda – who is alleged to have been behind all the shutters for rent in Khula Manch – will continue to thrive. While belatedly razing the shutters was better late than never, there are people who had invested in these places, bet their savings on it and now find themselves in financial ruin.

Whether they were naïve or extremely foolish in planning to set up business is beside the point – those shutters should never have been up in the first place. But we’re talking about the KMC and nothing more can be expected from an organization led by two perennially feuding clowns. These victims will now probably find themselves running from pillar to post over the next few years trying to get justice while the person allegedly behind this mess walks around a free man due to political patronage.

Our country is well and truly a plutocracy where everything is controlled by people of means – aka people within the nexus – and rule of law is meant only for common folk. This triangle also has an appropriate moniker for it – land mafia. While this name has a slightly nefarious ring to it, it’s really just a bunch of rich and powerful people ripping us off. Some of the people associated with the Lalita Niwas land scam are stalwarts of Nepal’s business scene, the same folks who appear on magazine covers, give motivational speeches “inspiring” others and act as Nepal’s business ambassadors abroad. Some go a step further – publish books espousing philosophy and patriotism but think nothing of encroaching on wetlands that belong to a lake conservation area.

It’s a sad state of affairs when our businessmen dream big, talk the talk on all sorts of forums, go on foreign jaunts and try and sell Nepal to the world while doing everything they can to avoid something as fundamental as paying their fair share of taxes back home. From rampant under invoicing to avoiding various duties to anti-social business practices, we’ve got it all. And the less said about our politicians and bureaucrats the better.

When all is said and done and the scams are relegated to the middle pages of our newspapers, what will happen is that they will quietly be filed under the folder marked “never to be solved”. It will join other folders related to the load shedding scandal, gold smuggling scam, wide body aircraft procurement and tax settlement scams among others that will never ever be solved. It’s in everyone’s interest – politicians, businessmen and public sector officials – not to get it solved. This way everyone wins – except the taxpayer i.e. you and me. But then again, who cares.