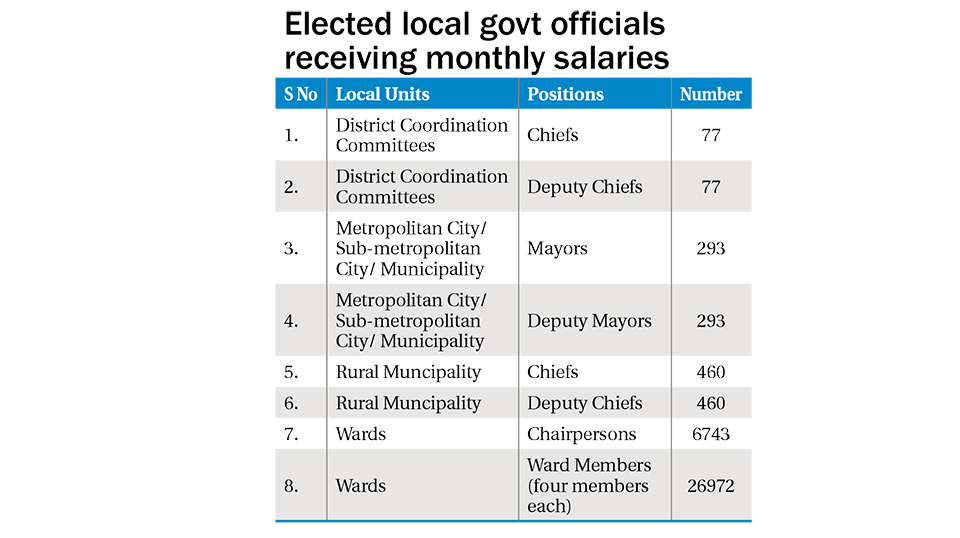 KATHMANDU, Oct 19: In a landmark verdict, the Supreme Court on Friday invalidated the salaries and salary-based perks being paid to elected local officials under laws that have been promulgated locally.

A five-member constitutional bench chaired by Chief Justice Cholendra SJB Rana issued the verdict, invalidating laws promulgated in this connection in all seven provinces except Province 1. Deepak Kumar Karki, Kedar Prasad Chalise, Meera Khadka and Hari Krishna Karki are the other justices on the constitutional bench.

The verdict affects the billions being distributed to local elected officials in salary and allowances under the laws that were promulgated after the country turned into a federal republic.

Chief and deputy chiefs of 77 district coordination committees and the chiefs, deputy chiefs and office bearers of ward committees of the 753 local governments have been taking home salaries under laws that they themselves enacted. There are a total of 293 municipalities including six metropolitan cities and 11 sub-metropolitan cities in the country, and 460 rural municipalities. These local governments comprise a total 6,743 wards.

Similarly, the chiefs and deputy chiefs of rural municipalities draw on average Rs 25,000 and Rs 22,000 a month in salary, respectively. Likewise, the ward chairperson and the four members in each ward have been receiving Rs 22,000 and Rs 6,000 each monthly in salary. The salaries are in addition to meeting allowances and other perks and benefits.

Although elected officials in the 137 local government units in Province 1 have not received any salary, they have been receiving huge amounts in meeting allowances, perks and benefits. Officials at the Ministry of Federal Affairs and General Administration say the amount these officials take as meeting allowance and perks equals that of officials who have been receiving a monthly salary.

In its verdict, the apex court said the salary and salary-based allowances being received by the local-level officials are nothing short of unconstitutional and pronounced them null and void effective from Friday itself. The text of the verdict has not yet been made public.

In handing down its verdict, the constitutional bench was responding to a public interest litigation (PIL) filed by advocate Lokendra Bahadur Oli. He has challenged the relevant laws promulgated by the provincial assemblies of Province 2 and other provinces. The petitioner argued that the salaries were against the spirit of the constitution.

Oli has also said that in paying themselves the salaries and salary-based allowances, the local-level officials are going back on the commitment they made during the local elections. The constitution states that elected representatives cannot receive any salary for carrying out their political duties.

Similarly, Article 227 states that other matters relating to the conduct of business of a Village Assembly or Municipal Assembly, the rules of procedure of meetings, formation of committees, conditions under which the office of member falls vacant, the facilities receivable by members of the Village Assembly and Municipal Assembly and employees and officers of the Village Body and Municipality shall be as provided for in province law.

Some 20 years ago also, the apex court had invalidated a law promulgated for providing pensions to lawmakers. That was in response to a writ petition filed by anti-corruption activist Bharat Jangam. The verdict saved the state treasury billions of rupees that would have gone to politicians merely for carrying out their political roles.

A lawmaker to get Rs 124,000 as monthly salary, allowances

KATHMANDU, Nov 20: A lawmaker will be receiving Rs 124,000 as a monthly salary and allowances after the meeting of... Read More...

KATHMANDU, Oct 4: The Supreme Court has stayed the decision of Kathmandu Metropolitan City to demolish the historic Bag Durbar to... Read More...

A chronicle of change
22 hours ago

Media Council bill can be revised, says Minister Baskota (with video)
14 hours ago