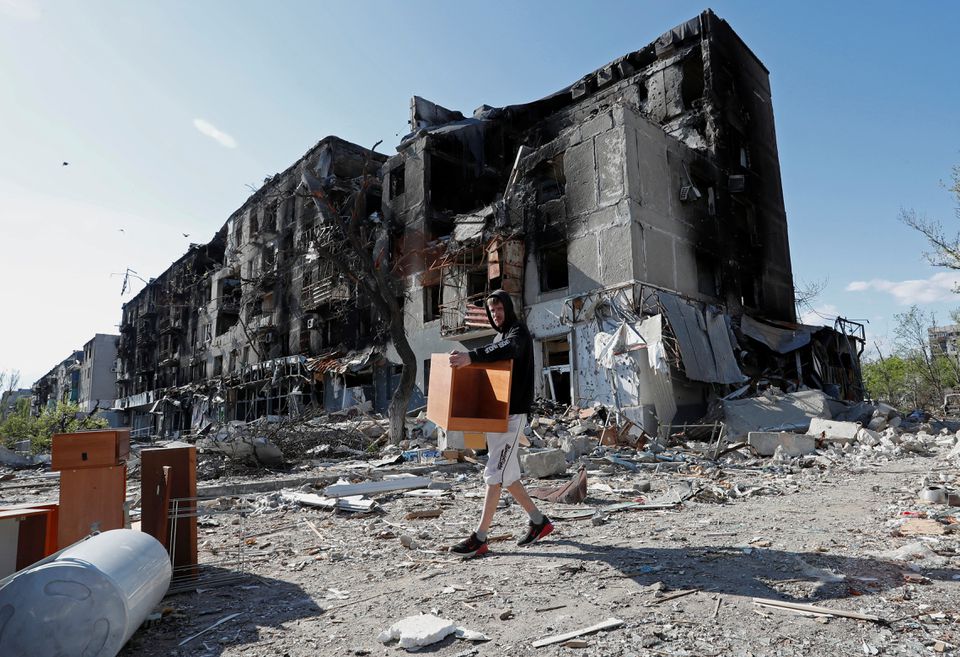 A local resident takes furniture out of an apartment building heavily damaged during Ukraine-Russia conflict in the southern port city of Mariupol, Ukraine April 28, 2022.

KYIV, April 29: Russia killed a journalist from the U.S.-backed broadcaster Radio Liberty in a missile attack on Kyiv during a visit to the Ukrainian capital by the secretary-general of the United Nations, the broadcaster said on Friday.

Prague-based Radio Free Europe/Radio Liberty (RFE/RL) said the body of producer Vira Hyrych had been found on Friday morning in rubble after Thursday's attack destroyed the bottom two floors of a residential building. It said Hyrych had worked for Radio Liberty since 2018.

"She was going to bed when a Russian ballistic missile hit her apartment in central Kyiv. Russia’s barbarism is incomprehensible," Ukrainian Foreign Ministry spokesperson Oleg Nikolenko said. "We call on media organizations to condemn the murder of Vira and all other innocent Ukrainians."

U.S.-funded RFE/RL, which has covered the former Soviet Union since the Cold War, is one of the main remaining Russian-language sources for news outside Kremlin control, since Moscow effectively shut all independent media within Russia following its invasion of Ukraine on Feb. 24.

"The editorial board of Radio Liberty expresses its condolences to the family of Vira Hyrych and will remember her as a bright and kind person, a true professional," the broadcaster said in a statement.

In Kyiv, workers were cleaning up rubble in the residential area hit by the missiles.

"Kyiv is still a dangerous place and Kyiv is still the target of Russians, of course. The capital of Ukraine is the goal and they want to occupy it," Mayor Vitali Klitschko said, supervising the cleanup before the body of Hyrych was found.

The missiles hit the capital during a visit on Thursday by U.N. Secretary-General Antonio Guterres. Ukrainian Defence Minister Oleksiy Reznikov called it "an attack on the security of the Secretary-General and on world security".

Ukraine acknowledged on Friday it was taking heavy losses in Russia's assault in the east, but said Russia's losses were even worse, as U.S. President Joe Biden called on Congress to send as much as $33 billion to help Kyiv withstand the attack.

President Volodymyr Zelenskiy praised Biden's offer of massive help, which amounts to nearly 10 times the aid Washington has sent so far since the war began on Feb. 24.

Having failed in an assault on Kyiv in the north of Ukraine last month, Russia is now trying to fully capture two eastern provinces known as the Donbas.

Ukraine has acknowledged losing control of some towns and villages there since the offensive began last week, but says Moscow's gains have come at a massive cost to a Russian force already worn down from its earlier defeat near the capital.

"We have serious losses but the Russians' losses are much much bigger...They have colossal losses," presidential adviser Oleksiy Arestovych said.

By pledging tens of billions of dollars in aid for Ukraine, Biden has dramatically increased U.S. involvement in the conflict. The United States and its allies are now sending heavy weapons including artillery, with what Washington says is an aim not just to repel Russia's attack but to weaken its armed forces so it cannot menace its neighbours again.

"We need this bill to support Ukraine in its fight for freedom," Biden said. "The cost of this fight - it's not cheap - but caving to aggression is going to be more costly." read more

Zelenskiy tweeted: "Thank you @POTUS and the American people for their leadership in supporting Ukraine in our fight against Russian aggression. We defend common values - democracy and freedom. We appreciate the help. Today it is needed more than ever!"

Russia has said the arrival of Western arms in Ukraine means it is now fighting a "proxy war" against NATO. President Vladimir Putin threatened unspecified retaliation this week, while his foreign minister warned of a threat of nuclear war.

Although the U.S. aid is mainly grants rather than loans, Russian parliament speaker Vyacheslav Volodin accused Zelenskiy on Friday of driving Ukraine "into a debt pit" by taking it. read more

Zelenskiy's office said Russia was pounding the entire front line in the eastern Donetsk region with rockets, artillery, mortar bombs and aircraft. The Ukrainian general staff said Russia was shelling positions along the line of contact to prevent the Ukrainians from regrouping.

Britain said fighting had been particularly heavy around the cities of Lysychansk and Severodonetsk, the main part of the Donbas that Russia is still trying to capture, with an attempted advance south from Russian-held Izium towards Sloviansk.

"Due to strong Ukrainian resistance, Russian territorial gains have been limited and achieved at significant cost to Russian forces," the British defence ministry said in an update.

The bloodiest fighting and worst humanitarian catastrophe of the war have been in Mariupol, an eastern port reduced to a wasteland by two months of Russian bombardment and siege.

Ukraine says 100,000 civilians remain in the city, which is mostly occupied by Russia. Hundreds of civilians are holed up with last remaining defenders in underground bunkers beneath a huge steel works. Zelenskiy's office said an operation was planned on Friday to get civilians out of the plant, giving no details. read more