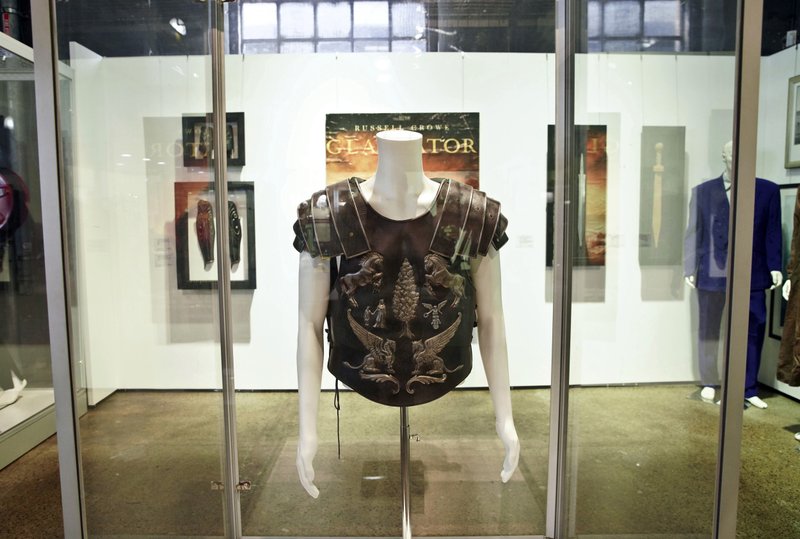 One of the costumes from the film Gladiator owned by actor Russell Crowe is on display to be auctioned by Sotheby’s auction house as part of the ‘Russell Crowe: The Art of Divorce Auction’ at Carriageworks, Sydney, Australia Saturday, April 7, 2018. (Ben Rushton/AAP Image via AP)

CANBERRA, April 8: A 128-year-old Italian violin that Russell Crowe learned to play in a few months before he starred in the 19th century war drama “Master and Commander” stole the show among movie memorabilia on offer at the Oscar-winning actor’s auction on Saturday.

The rare instrument by Leandro Bislach sold for 135,000 Australian dollars ($104,000), the highest price for movie-related offerings among 227 lots up for sale in Sydney as part of the Australia-based New Zealander’s divorce settlement.

While the violin was close to the top of Sotheby Australia’s valuation, the winning bid for character Captain Jack Aubrey’s dress uniform exceeded the auctioneer’s hopes by AU$80,000.

The violin’s price was only exceeded by a painting from Crowe’s extensive collection by Australian artist Brett Whiteley, “Moreton Bay Fig and Palms,” which sold for AU$190,000.

The auction, titled “The Art of Divorce,” took place on the actor’s 54th birthday and the anniversary of his wedding to singer Danielle Spencer in 2003.

A cheerful Crowe made an appearance after Sydney actress-singer Alisa Nasteski sang Happy Birthday and the crowd of bidders and spectators — some in formal wear, others wearing sports team-colored beanies — gave him three cheers

“G’day folks, how’re you doing?” Crowe said to the crowd. “Are you having a little bit of fun? It’s exciting, isn’t it? So it’s been a lot of fun putting it together for you.”

Immediately afterward, the violin— which Crowe described as “a lot very dear to my heart” — became the 31st item to go under the hammer.

Crowe tweeted after the five-hour auction that he had earned AU$3.7 million, with potential sales worth AU$350,000 still under negotiation.

“A bunch of stuff I didn’t really want to sell coming home ... not a bad hourly rate for a 5 hour shift,” he tweeted.

Bidders’ interest had been expected to focus on the violin and paraphernalia from “Gladiator,” the 2000 blockbuster that earned Crowe his Academy Award for Best Actor. Demand for movie memorabilia often overwhelmed expectations.