Rural municipality in Dolakha building sports ground in all its wards 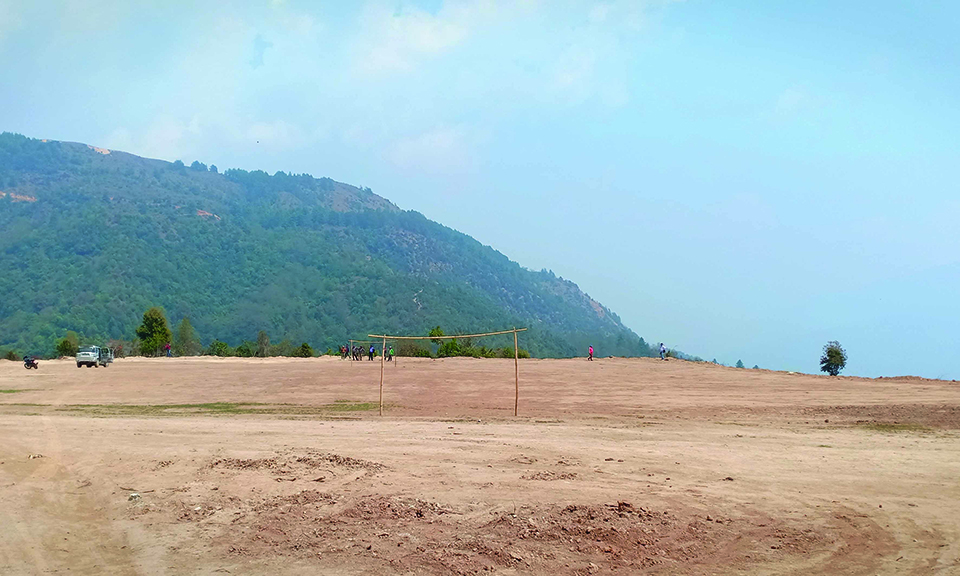 Ramesh Khaitwada/Republica An under construction sports ground in ward number seven of Tamakoshi Rural Municipality, Dolakha in this recent picture.

DOLAKHA, May 1: At a time when major cities across the country including Kathmandu are fast losing open spaces, a rural municipality in Dolakha has launched a campaign to ensure the availability of sports ground in all its wards. Tamakoshi Rural Municipality has initiated the process to register such fields in all its wards.

Our objective is to encourage sporting activities among our population - children, youths and other members of the community. We will approach interested citizens and organize sports competitions to foster sporting activities. We also plan to organize rural municipality level sports competition every month. -- Urmila Khadka, vice chairperson of Tamakoshi Rural Municipality

"Our rural municipality wants to set an example. We do not want to live in a concrete jungle in the long run where we won't have open space to run to when some disaster occurs," said Urmila Khadka, vice chairperson of the rural municipality referring to the lack of space in Kathmandu during the devastating earthquake of 2015.

"When you build house everywhere but leave no space gardens or sports ground, life becomes very unhealthy. In fact, it has already become late for us to work on it. Ensuring the availability of commons in every ward or village is very challenging," she added.

The news has elated locals. According to them, playing sports on their own and playing it systematically are entirely two different things.

"We are pleased about it. Though we could play sports anywhere as we please, it is not as same as the way the municipality can organize for us," said a local Ram Sunuwar. "We are excited that we are now not only going to play sports but also going to participate in sports competition," he added.

Sunuwar stated that boys in the villages are crazy about cricket, followed by football and volleyball. "Both girls and boys love volleyball. But over the years, this sport has been losing the charm. There are only a few people in the village who can play the sport," Sunuwar shared with Republica. With the rural municipality office taking the lead in promoting sports, more and more youths will come together, he noted.

"Even if one has interest in sports, the lack of encouragement or proper arrangement keeps him or her away from playing sports. But when the government promotes sports by providing rewards, it changes the complete scenario."

Locals also complained about the lack of open space in schools. Unlike in the past, few schools these days have public spaces. Due to this, students are more limited to indoor games.

"In our days, students were quite active. They would play physical and outdoor games. But nowadays, most schools do not have their own playgrounds. This prevents children from learning sports," said Sunuwar. "Only those who have an exceptional love for sports play games."

Vice Chairperson of the rural municipality, Khadka stated that sports grounds are being constructed in Malu, Sahare, Chyama, Jhule, Bhirkot and Jefe, among other wards.

"For now we have designated seven areas for sports grounds and construction is going on in these places. Later on, we would be expanding to other wards as well," said Khadki.

He further informed Republica that most of these grounds would be shaped like open stadiums. These grounds will have facilities and amenities found generally in medium size grounds.

"Once the ongoing work is over, we will have a few medium size stadiums in all villages," stated Khadki, adding that the provincial government has also contributed to the budget.

According to Ishwor Pokharel, chairperson of the rural municipality, the project is one of the top priorities of the local government.

"We are building such stadiums in seven wards presently. Both the local and the provincial governments have prioritized this project," he said.

Locals have taken the move in a very positive note. They state that the stadiums will not only promote sports culture but along with it will bring youths closer. Apart from that, open spaces are expected to offer multiple benefits. "We will be able to organize seminars, camps in such open spaces. That will be an additional benefit," said Sunuwar.