Ruling NCP denounces US, allies for ‘intervening’ in Venezuela 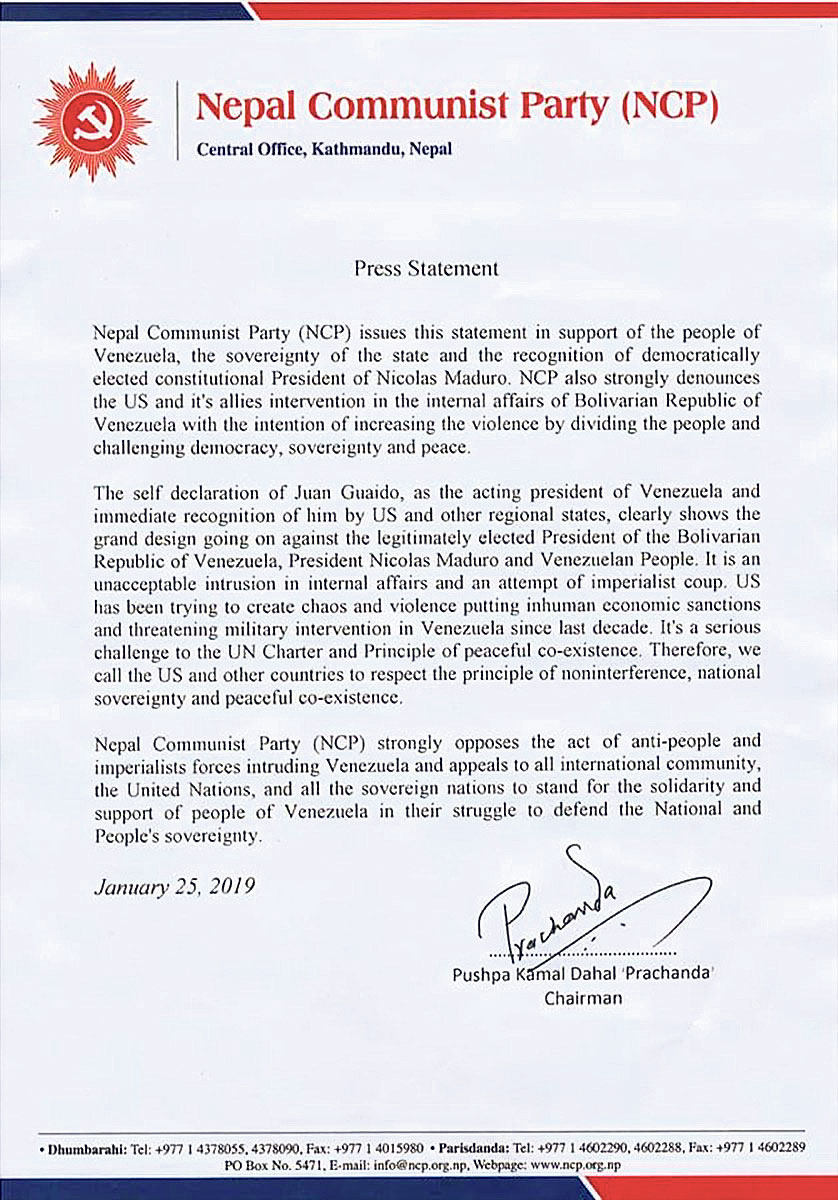 KATHMANDU, Jan 26: Joining a few other major countries including China and Russia in support of President Nicolas Maduro of Venezuela, ruling Nepal Communist Party (NCP) on Friday slammed the US and its allies over what it called an “intervention in the internal affairs” of Venezuela.

Issuing a statement on Friday, NCP Chairman Pushpa Kamal Dahal said his party denounces the US and its allies for “an attempt of imperialist coup” in Venezuela, while accusing the US of trying to create chaos and violence through harsh economic sanctions and threats of military intervention.

The statement issued “in support of the people of Venezuela, the sovereignty of the state and the recognition of democratically elected constitutional President Nicolas Maduro” also alleges that the move of the US and its allies intends to stir violence by dividing the people and challenging democracy, sovereignty and peace.

The statement comes amid massive protests erupting in Venezuela after President Maduro, who secured another six-year term last May in a disputed election, was sworn in two weeks ago. Political turmoil took a dramatic turn after the opposition leader Juan Guaido, who is leading the massive street protests, declared himself the interim president, and was subsequently able to win recognition from the US and its allies.

The NCP statement said the recognition of Guaido as interim president by the US and other regional states clearly shows the “grand design going on against the legitimately elected President Maduro and Venezulean people”. “It is an unacceptable intrusion in internal affairs and an attempt of imperialist coup. The US has been trying to create chaos and violence putting inhuman economic sanction and threatening military intervention in Venezuela since last decade,” said the statement.

The NCP statement comes a day after major Western countries including the US and the UN issued a joint statement, calling on the government to clarify to the public on its plans for taking the transitional justice process forward in 2019 as the terms of the Truth and Reconciliation Commission and Commission for the Investigation of Enforced Disappeared Persons were expiring soon. The government, however, slammed the joint statement, saying foreigners do not need to remind Nepal about transitional justice issues.