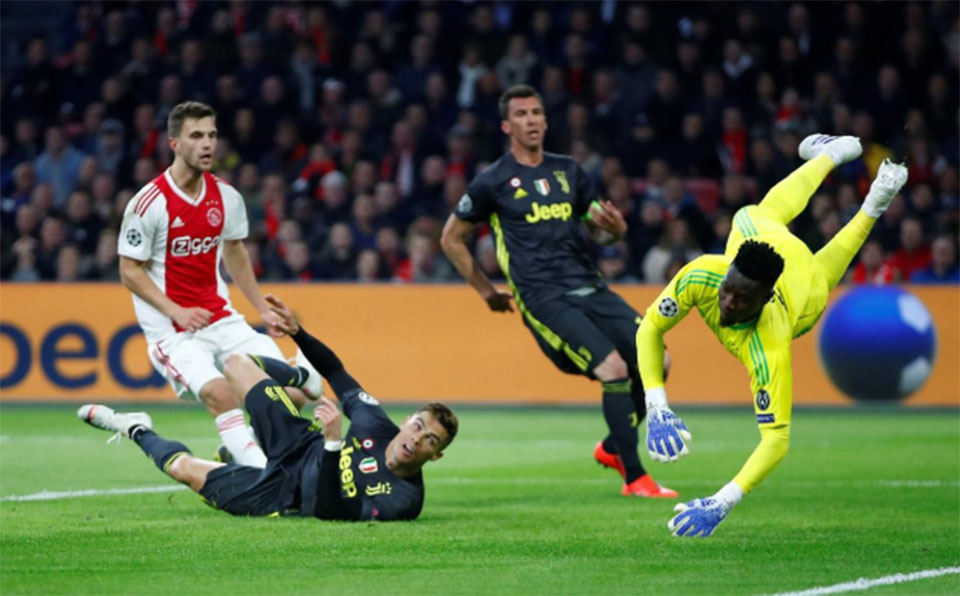 AMSTERDAM, April 11: Cristiano Ronaldo produced yet another quality goal to add to his collection and help Juventus to a 1-1 draw at Ajax Amsterdam in the first leg of their Champions League quarter-final tie on Wednesday.

Juventus took the lead on the stroke of halftime as Portuguese forward Ronaldo began an attacking move inside his own half before sprinting down field and diving to head in a clever chip from Joao Cancelo.

“Ronaldo proved again he is from a different level, the timing of his player is so different from the others,” said an admiring Juventus coach Massimiliano Allegri.

Ajax equalised 30 seconds into the second half after Cancelo lost control of the ball to allow David Neres to run down the left wing, cut inside and curl the ball past Juve goalkeeper Wojciech Szczesny.

The result leaves the Serie A side in a strong position to advance to the semi-finals in next week’s return leg in Turin. However, they will be mindful of Ajax’s 4-1 away win over Real Madrid in the last round that eliminated the holders 5-3 on aggregate.

Hakim Ziyech had several efforts at goal in a lively start for the youthful Dutch team, who have come through the pre-group phase qualifying round to reach the last eight.

Donny van de Beek scraped the outside of the upright with a 25th minute effort from close range after opening up space for himself in the penalty area in Ajax’s best chance of the first half.

But Juventus, with the 34-year-old Ronaldo central to their attacks, worked their way into the contest and came close themselves when the forward set up Federico Bernardeschi to turn and shoot in the 37th minute. But he was just off target.

Ronaldo, who scored a hat-trick in the previous round against Atletico Madrid, then scored a 125th Champions League goal with the last move of the first half.

“He is a predator in the box. He waited for a gap and then sprinted past two players,” conceded Ajax’s teenage captain Matthijs de Ligt.

PENALTY CLAIM
After equalising, Ajax then dominated possession but were guilty of over-elaborate passing and were also fortunate not to have given away a penalty when defender Nicolas Tagliafico was tugging on the jersey of Juventus captain Mario Mandzukic.

Spanish referee Carlos del Cerro Grande paused briefly in the 53rd minute to presumably hear from the Video Assistant Referee (VAR) but resumed play before TV replays showed that Juventus had been denied a decent claim.

Tagliafico will miss the second leg next Tuesday after being booked late in the first half.

Juve hit the upright in the closing stages through substitute Douglas Costa although Ajax could have had the last say as Dusan Tadic missed a good chance in stoppage time.

“A 1-1 score is not what we had hoped for but we are still well in,” said Ajax coach Erik ten Hag. “We had a lot of patient possession and we created one or two good chances.”

More than 100 Juventus supporters were detained by Dutch police before the match while home fans were also arrested as a water cannon was used outside the ground.

LONDON, April 10: Son Heung-min once again proved there is more to Tottenham Hotspur than Harry Kane as the South... Read More...