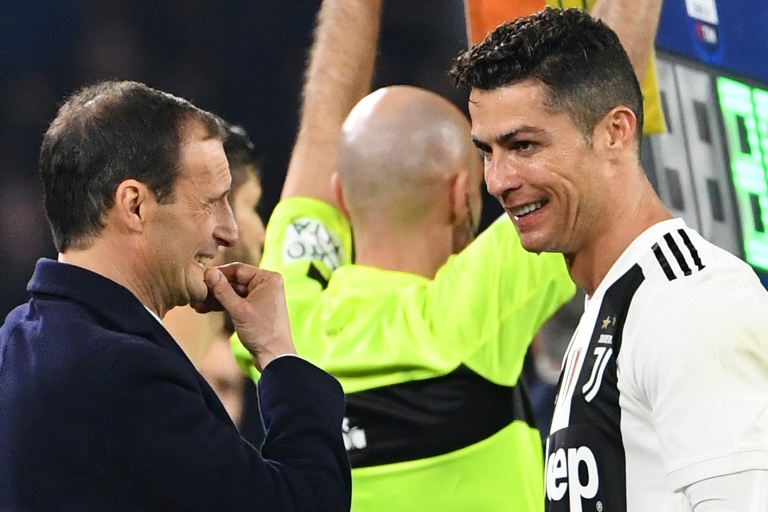 Cristiano Ronaldo is committed to Juventus next season despite his bitter disappointment at the Italian giants Champions League flop, coach Massimiliano Allegri revealed on Friday.

Allegri's injury-hit side host Fiorentina on Saturday needing just a point to lift their eighth straight Serie A title, days after a shock home 2-1 defeat to the Dutch side that saw them eliminated 3-2 on aggregate.

"Cristiano is the future of Juventus. He has done very well this year and will do so next season, of course he is disappointed like all of us but he's calm about it," said Allegri.

"Cristiano has had an extraordinary season and will play tomorrow."

Five-time Ballon d'Or winner Ronaldo had been bidding for a sixth Champions League title to add to his four won with Real Madrid and one with Manchester United.

The 34-year-old joined Juventus from Real last summer in a 100 million-euro ($117 million) deal which runs until 2022, with a reported annual salary of 31 million euros.

He scored six of his teams' 14 Champions League goals this season and has 19 so far in Serie A, four behind leading scorer Fabio Quagliarella.

"Ronaldo's arrival did not give us any certainty of winning the Champions League," continued Allegri.

"Barcelona play a semi-final this year for the first time after four years and they have (Lionel) Messi. Football is not just about individuals.

"We have to put the disappointment of the elimination in the Champions League behind us."

Injuries have hit Juve hard ahead of the weekend's clash, with Sami Khedira announcing yesterday that he is set to have season-ending knee surgery, while Allegri revealed that key attacker Mario Mandzukic could also miss the rest of the season.

"(Goalkeeper) Mattia Perin is out until the end of the season, as is Sami Khedira and maybe Mario Mandzukic." he said.

Meanwhile striker Paulo Dybala will be out for three weeks and Douglas Costa and Jose Caceres for 10 days each, while defender Giorgio Chiellini could be back for next week's trip to Inter Milan.

However with a 17-point lead over Napoli Allegri's side are almost certainties to lift their 35th league title as they cement their domestic dominance despite continental disappointment.

"The eighth consecutive Scudetto is a source of pride for everyone. Once it's sealed we all have to enjoy it, it wouldn't make sense not to celebrate it."