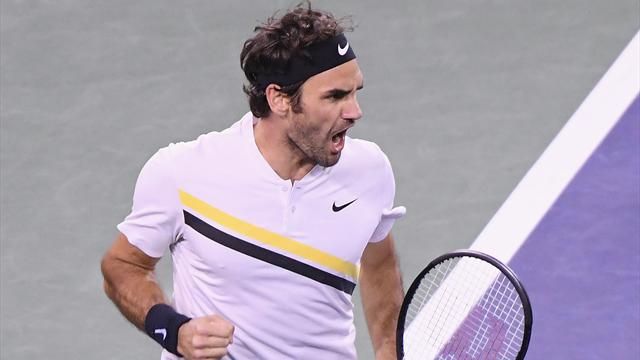 World No.1 Roger Federer has insisted that he is in full health after enduring a tough three set battle against Borna Coric at the BNP Paribas Open on Saturday.

The 36-year-old required almost two-and-a-half hours to get past the Croatian 5-7, 6-4, 6-4. During the roller coaster encounter, Federer hit 28 winners to 37 unforced errors and dropped his serve four times against his inspired rival. Coric was playing in his first Masters semifinal at the age of 21.

As the Swiss battled his way into the final, reports surfaced that he was suffering from a lower back issue. An injury that forced him out of the Cincinnati Masters last August. Despite the speculation, Federer has insisted that he is fully fit. Insisting that his tough match was due to the quality of his rival and not him.

“I think trying to understand Borna’s play, because he absorbs a lot of power very easily. He’s a great retriever. It became a bit of a cat-and-mouse game.” He explained about his match performance.
“And when you’re thinking you can play offense all the time and then he catches you offguard and you have to go back into defense, I felt like maybe in the beginning it wasn’t happening naturally, but I thought he was protecting his serve very well.
“I was just hoping that through tougher rallies and staying in the match for longer, you know, I would start to feel better in defense, particularly because in the beginning it wasn’t quite there. But I think it had something to do with him rather than me. I’m physically totally fine.”

By securing his place in the final at Indian Wells, the top seed has achieved another milestone in his illustrious career. It is now Federer’s best ever start to a season with a 17-match winning streak. Beating his 2006 record of 16-0.

“I’m happy. Especially also with the match (against Coric), it was just a fighting match rather than, like — it didn’t come easy, so I had to go get it. Also got a little bit lucky, of course, throughout the match.” Said Federer.
“I hung tough and put a lot of effort into it to get the record, if you like. I mean, you go from one to the next.”
” But it’s nice to get off to a good start this year, and I hope I can play well again tomorrow (Sunday).”He added.

In Sunday’s final, Federer will take on Juan Martin del Potro. The Argentine defeated Milos Raonic 6-2, 6-3, to reach his first Masters 1000 final since the 2013 Shanghai Open. Securing his 400th win on the tour.

The two players have clashed with each other four times last year with Federer triumphing in three of those. Although Del Potro had the edge when they met in the quarter-finals of the US Open. Historically the two have played against each other in every grand slam, one Olympic Games and eight Masters tournaments.

“I think we have an interesting matchup. We both know what the other is trying to do, and we try to stop the other person from doing it. But it’s hard when me or him is in full flight. It’s basically an arm wrestle the whole time, and I think we enjoy that.” Said Federer.

Entering the match as the underdog, Del Potro believes that he has the ability to end Federer’s winning run. He recently re-entered the top 10 of the ATP Emirates rankings for the first time since returning from a lengthy injury absence.

“I love to play against him.” Stated Del Potro. “He’s the favourite to win tomorrow, but I will try to do my best tennis. I beat him in the past, and I know how can I do to repeat that, but is not easy. It will be a good challenge to see how my level is against him.”