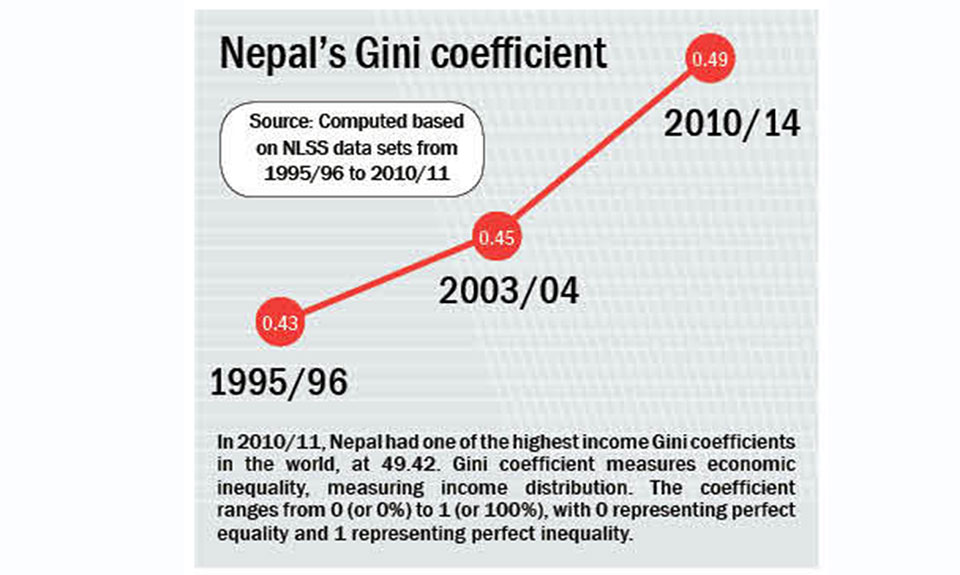 The report, Fighting Inequality in Nepal: The Road to Prosperity, prepared by Oxfam, the Humanitarian Accountability Monitoring Initiative (HAMI) and the South Asian Alliance for Poverty Eradication, states that the inequalities in wealth and income are widening.

Moreover, the report has predicted that the gap between rich and poor will further widen if timely interventions are not taken to reform existing policies.

The report blames highly unequal distribution of land as a major driver of the stunning level of inequality. The document, said to be prepared by analyzing secondary government data, states that seven percent of the wealthiest households own around one-third of the country's agricultural land, half of Nepali farmers own less than half a hectare, and 29 percent of the population have no land at all.Women and girls are said to be in worse condition both in economic terms and land ownership. The report states that while women work long hours on farmlands, other industries and in the home, the value of their work is not recognized, and a large majority have no land ownership.

“Women work long hours on agricultural land, yet 81 percent are landless. Minorities are also less likely to own land, with landlessness as high as 44 percent among Dalits in the Tarai region,” states the 45-page report.

The gap between salaries is also high. According to the report, top bank executives earn more than 100 times the salary of an average Nepali worker.

The report has argued that outdated ideology, privatization of public services like health and education, crony capitalism and disasters have been contributing to widen the gap between the rich and the poor .

“We encourage the Nepal government to move away from the outdated neo-liberal policies which have led to tax structures that favor the wealthy and corporations at the expense of the citizens, especially the poor and under-privileged,” said Country Director of Oxfam Nepal Cecilia Keizer, adding, “Because the rich and business pay little taxes, the government has little money left for public services like health, education and social protection.”

Netra Timsina, one of the researchers involved in the study, stressed the need of introducing more progressive taxation to reduce the gap between the rich and poor.

“Privatization of public services has ignored the needs of poor people, women, and minorities; for instance, a poor family in need can't get quality medical care because it's too expensive. There's just one doctor for every 17,34 people in Nepal,” said Timsina.

He urged the government to introduce more progressive taxes, where businesses and the wealthy pay more. The government must also close any loopholes that allow those in power and have money to avoid paying taxes. “Indirect taxes which are regressive still account for more than 2/3rd of revenue,” he claimed.

Highlights of the report:
· Richest 10 pc earn three times more than the poorest 40 pc
· Richest 10 pc has more than 26 times as much wealth as the poorest 40 pc
· 7 pc of the wealthiest own around one-third of agricultural land
· Only 6 pc of girls complete primary education
· Top bank executives earn more than 100 times the salary of an average Nepali worker
· 81 pc of women are landless
· Level of income disparity has skyrocketed in the past 15 years
· Replace neo-liberal development discourse
· Reject commercialization and privatization of health and education

KATHMANDU, Oct 7: A couple’s daughter died while their son is still missing when the motorcycle the four were traveling... Read More...

SURKHET, Oct 7: The local administration has issued a warning after the water level in the Bheri River crossed the... Read More...

RASUWA, Oct 7: An Israeli trekker, who got injured while trekking to Gosaikunda, has been rescued and airlifted to Kathmandu. Read More...