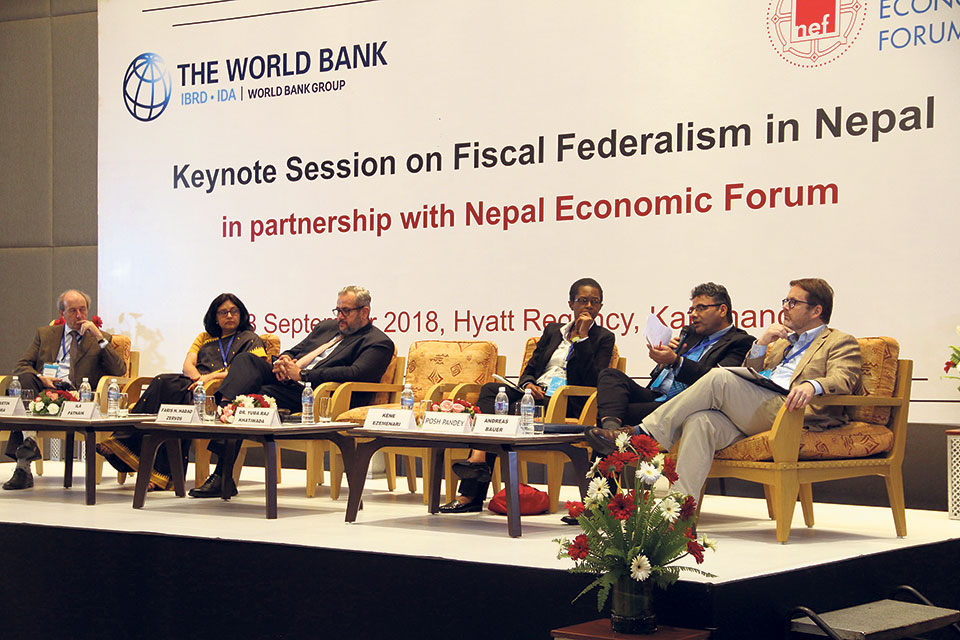 KATHMANDU, Sept 19: Experts have said that the lack of financial resources combined with the lack of capacity for service delivery at the local level units could become one of the biggest challenges for Nepal's federalism.

Speaking at the 'Keynote Session on Fiscal Federalism in Nepal' organized by the World Bank jointly with Nepal Economic Forum on Tuesday, they also said that there should be a mechanism in place for coordination between the three tiers of the government and resolution of any issue that comes during the implementation of the fiscal federalism.

"We need to have a mechanism in place at the local level in Nepal, to know when things are not going right, and to set them right as soon as possible," said Kene Ezemenari, the World Bank's senior country economist for Nepal.

Andreas Bauer, IMF Senior Resident Representative for India, Nepal and Bhutan, echoed the concern. "With the delegation of functions and authorities to local levels, the need is to have an agency for the coordination. The second tier will have that role which is very challenging," said Bauer.

IMF's Senior Resident Representative Bauer also said that the capacity for execution of budget was also a challenge in the new federal system. "The capacity has long been an issue even at the central level. It takes times for local levels to develop the capacity. My concern is that service delivery could suffer during this process," he said.

Posh Raj Pandey, executive chairman of South Asia Watch on Trade, Economics and Environment (SAWTEE), expressed concerns that some provisions in the constitution could threaten the concept of 'common market' in the country.

"If you see the list of exclusive rights for the provinces in the constitution, the role of the management of interstate trade has been assigned to province government," said Pandey. "The provinces will have their own tax structures and will start collecting taxes during the movement of goods. This will add transaction cost while also creating fragmented market in Nepal," he added.

Pandey also said that delay in the formation of National Natural Resource and Fiscal Commission (NNRFC) in line with a constitutional provision has also hit the capacity of the sub-national governments to generate resources to finance their functions.

Ila Patnaik, Professor at National Institute of Public Finance and Policy (India) and former Principal Economic Advisor to the Government of India, said that the lack of resources has always been a problem for the states who are supposed to deliver various services to the public. "We have been dealing with these issues in India since the last 70 years and are still struggling. If Nepal thinks long-term right away, things might get better," she added.

POKHARA, Sept 12: The British Council is facilitating a 9-million-euro project funded by the European Union (EU) for the improvement of... Read More...

I believe in my capacity, gender alone is not my identity

Bhawana Ghimire is a well known name in sports management. She was appointed the first female CEO of Cricket Association... Read More...

Niharika Rajput and her ‘rapist’ to tie the knot, thanks to their son’s phone call!
4 hours ago

Oli, Dahal and Deuba meet at PMO
20 hours ago