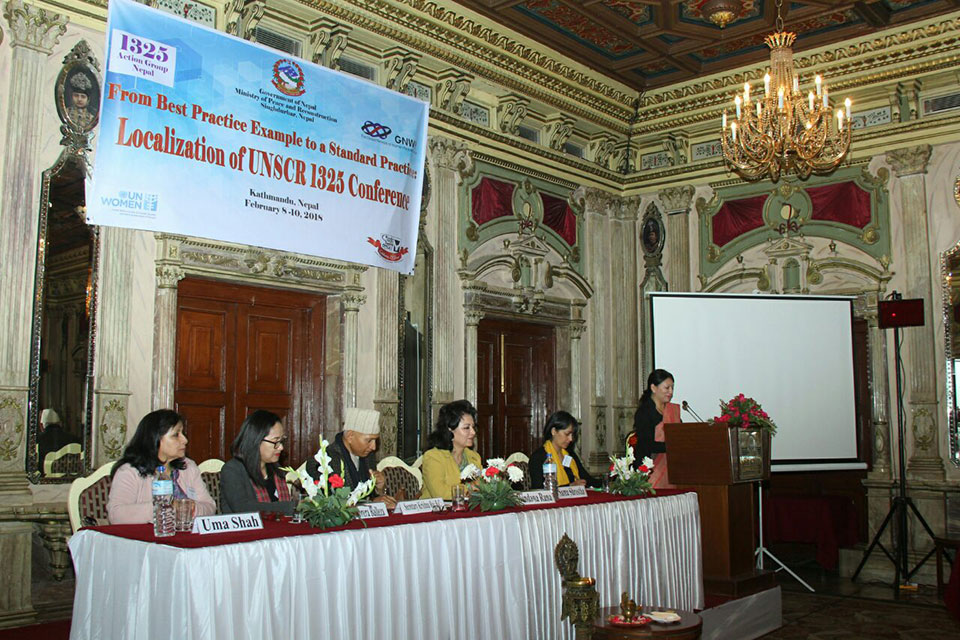 KATHMANDU, Feb 9: Participants in an international conference going on in Kathmandu pointed out the yawning resource gap in the area of women, peace and security issues across the world.

Speaking at the 3-day conference on "Localization of United Nation Security Council Resolution (UNSCR) 1325", Secretary at the Ministry of Peace and Reconstruction Krishna Raj BC said that the mission of peaceful world can't be materialized unless the issue of women, who make up half of the total population of the world and contribute significantly to the governments, is addressed.

He also expressed Nepal's commitment to further strengthen the implementation of National Action Plan (NAP) prepared to address problems faced by women during and post conflict situation as highlighted in the UNSCR 1325.

"Issue of pace and security is critical and critical role of women in peace and security is being increasingly recognized across the world. It is not limited to women but a precondition for sustainable development and world peace as well," B.C. said.

Mavic Cabrera-Balleza, CEO, Global Network of Women Peacebuilders (GNWP), urged the government around the world to take the lead in localizing the national action plans they have prepared related to UNSCR 1325. Commending the active role of civil society in taking the UN Charter to the grassroots level, she said that it is government obligation to implement UNSCR-1325 and supporting resolutions are international laws for they are the part of international law.  "If we don’t make a difference at national and local levels, we are failing to keep promises of 1325," she added.

Bandana Rana , UN CEDAW Committee Member and coordinator of 1325 Action Group, the local host of the conference, highlighted the relevance of the conference and the development of a standard toolkit of UNSCR 1325 localization particularly in the context of Nepal's federal structure.

Recalling Nepal's past efforts in localization of UNSCR 1325, she said that "Nepal's Localization Guideline on NAP 1325 adopted in 2013 helped in the implementation at the local level to some extent but there have been numerous challenges.  Therefore this standard toolkit for localization will help better implement the women peace and security issues in Nepal," she opined.

The conference organized jointly by Ministry of Peace and Reconstruction, 1325 Action Group-Nepal and the Global Network of Women Peace builders (GNWP) is being participated by government and civil society representatives of 17  countries including Nepal that have implemented the Localization program on UN resolution of women peace and security. Representatives from donor governments and foundations who support localization are also the part of the conference.

The participants will share and reflect on the outcomes and impact of the Localization strategy to date, and the evolution of the methodology. It will examine the application of the localization strategy on other political and peace processes and initiatives such as mediation and track peace-making, de-stigmatization of sexual violence victims, and conflict prevention.

Besides, the conference will collectively reflect on the way forward for the localization strategy and generate commitment to its implementation across all countries; and gather feedback on the usefulness of the Localization Toolkit, including its adaptability to different national and local contexts.

The conference will provide all participating countries, including Nepal, with an opportunity to review progress to date, set direction for the future, and generate commitment to the localization strategy in implementing UNSCR 1325 and the supporting women and peace and security implementation.

Lalitpur metropolis and police sign MoU for peace and security

FNJ urges Speaker Sapkota to incorporate concerns of stakeholders in Media Council, IT Bills
14 hours ago