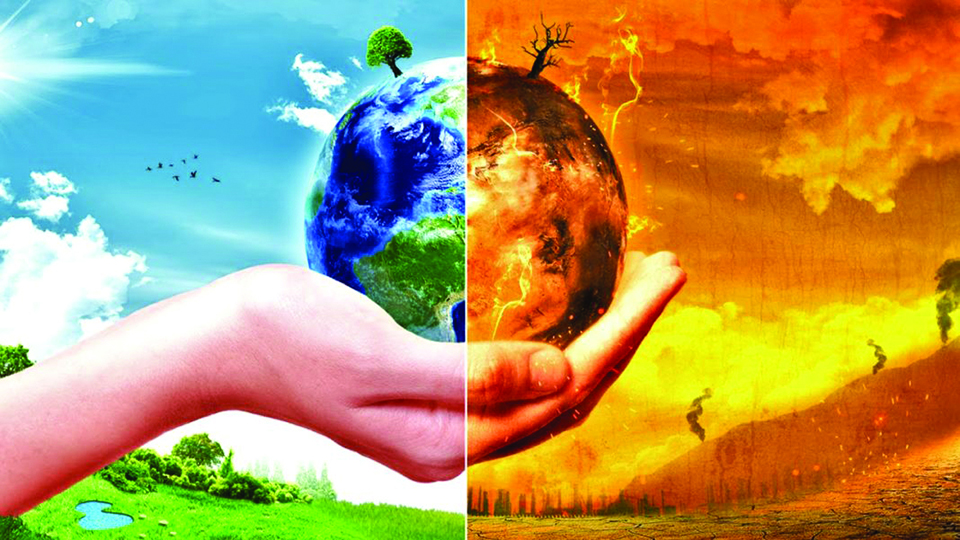 Though Nepal is not responsible for global climate change, it has contributed to solving this crisis. Global community should acknowledge this

A crucial meeting of the global climate regime is being held in Katowice, Poland from December 2 to 14. The 24th session of the Conference of the Parties (COP) under the UN Framework Convention on Climate Change (UNFCCC) is of significant importance for the world and for Nepal particularly because it is being held in the wake of the release of a special report on 1.5C by the Intergovernmental Panel on Climate Change (IPCC).

The report elaborates the impacts that will be incurred if the global average temperature rises by 1.5oC above pre-industrial levels in comparison to those expected from a 2oC rise in global average temperature. It paints a grave picture of what overshooting these targets means for the world, particularly its most vulnerable communities. Human induced climate change has already resulted in a spectrum of impacts including both slow onset and extreme events such as rising sea levels, melting glaciers, more frequent hurricanes, prolonged droughts, flooding, changing rain patterns, and wild fires among others. The poorest and the most vulnerable countries with least capacity are the ones that will suffer the most from these impacts.

In December 2015, 197 countries which are party to UNFCCC met in Paris to agree on a landmark international treaty called Paris Agreement, which has been ratified by 184 countries. This agreement aims to combat climate change and accelerate the actions needed to ensure a climate resilient and low carbon future in the context of sustainable development. One of the objectives of the Agreement is limiting global temperature increase to well below 2oC, while pursuing efforts to limit the increase to 1.5oC. For this target to be realized, all countries will have to participate, though developed countries are expected to take the most ambitious action.

At COP24 in Katowice, the rulebook will be finalized to guide implementation of Paris Agreement from 2020. It will outline the actions that Parties will need to take including to monitor, report and verify those actions and as such is critical to achieving the overarching goal of the Agreement.

The incoming Polish presidency of COP24, who will guide the negotiations in Katowice, has invited all head of states or governments to attend the high-level summit, sending a strong political signal of the importance of implementing Paris Agreement. President Bidya Devi Bhandari has represented Nepal.

This is the only second time that Nepal has been represented at its highest level at a COP in a decade. In 2009, then Prime Minister Madhav Kumar Nepal attended COP15 in Copenhagen. Given that Nepal is a Least Developed Country (LDC) and one of the most vulnerable countries to the impacts of climate change, Nepal’s president, who is addressing the conference on Monday, should make a compelling case for the country.

The impacts of climate change are already being felt countrywide with direct costs and consequences for development in Nepal. As a mountainous country, Nepal is rapidly losing its snow-caps and glaciers in the Himalayas. This not only affects the water security and livelihoods of Nepali communities but also tens of millions of people living downstream in India and Bangladesh. Nepal has already been forced to take extreme measures to reduce the risk of Glacier Lake Outburst Floods (GLOF) by lowering the level of both Tsho Rolpa and Imja glacier lakes. This has already come at a significant expense for the country with more lakes reported to be at risk.

Many lives, livelihoods and assets are lost due to climate induced disasters every year caused by events like uncontrollable flooding, droughts, landslides and distorted monsoon pattern. As a result, many households and, in some cases, entire communities are forced to relocate or migrate. In the future, Nepal is likely to face even more severe repercussions from impacts of climate change.

Nepal has set the target of moving out of LDC status and becoming a middle-income country by 2030. But this won’t be possible if we do not take serious measures to address climate change and progress on poverty alleviation and sustainable development. In particular, climate change will impede the ability of Nepal to achieve UN Sustainable Development Goals and the Sendai Framework on Disaster Risk Reduction.

Nepal is taking actions to address climate change in its own way. Currently, Nepal is revising its national climate change policy in line with evolving institutional frameworks of the country. Nepal has also launched the process of preparing its National Adaptation Plans to address both the medium and long-term climate adaptation needs. The country’s vision to go low-carbon by promoting renewable energy, managing waste and introducing electric transport system is also a positive step forward. Despite the fact that it is not responsible for global climate change, Nepal has genuinely become a part of the solution to this global crisis. The global community should acknowledge this.

The countries that are responsible for climate change and have a great capacity to address it should come up with clear and ambitious actions. Countries like Nepal are the ones to suffer the most. Their efforts should be in line with the recent IPCC report and the emission trajectories required to achieving the objectives of Paris Agreement. Developed countries must assume leadership, build trust and fulfil the commitments made in the Paris Agreement.

Greenhouse gases need to reduce sharply and quickly so that we do not overshoot 1.5oC target. In addition, developed countries must also mobilize adequate, predictable and transparent finance and technological support so that developing countries like Nepal can adequately address climate impacts. A robust Paris Agreement rulebook must be adopted at COP24 so that the world is in right track in addressing the global climate crisis.

The author is Executive Director of Prakriti Resources Centre and is attending COP24 in Katowice, Poland

Nepal must be ready for Kunming and Glasgow

We need to move away from a response to climate change that relies on undeliverable promises of carbon neutrality ... Read More...

UML Chairman Oli in Baluwatar to press PM Dahal to reinstate Lamichhane as home minister
4 hours ago
Two injured as a man tries to self-immolate in Pokhara, woman's condition critical
7 hours ago

Rabi Lamichhane was sued to change the balance of power: Pokharel
7 hours ago