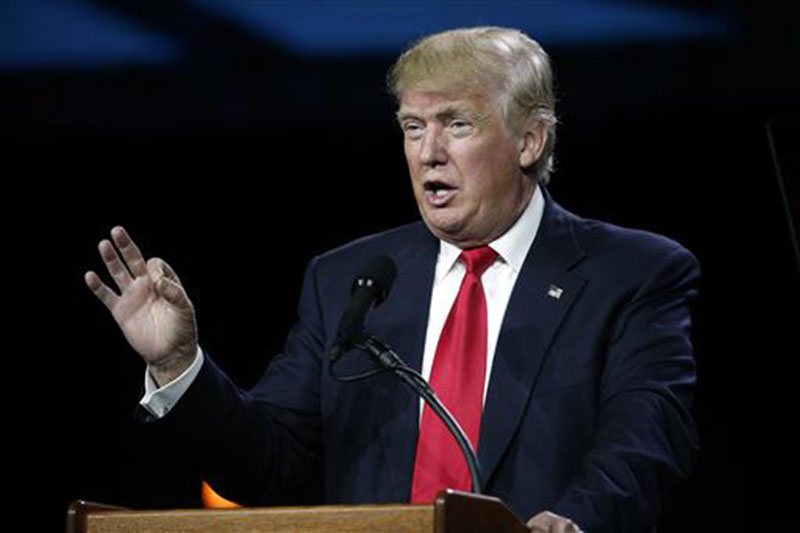 NEW YORK, Oct 8:  In a videotaped midnight apology, Donald Trump declared "I was wrong and I apologize" after being caught on tape making shockingly vulgar and sexually charged comments. Yet he also defiantly dismissed the revelations as "nothing more than a distraction" from a decade ago and signaled he would close his presidential campaign by arguing rival Hillary Clinton has committed greater sins against women.

"I've said some foolish things," Trump said in a video posted on his Facebook page early Saturday. "But there's a big difference between the words and actions of other people. Bill Clinton has actually abused women and Hillary has bullied, attacked, shamed and intimidated his victims."

Trump's 90-second statement capped a jarring day that threatened to sink the billionaire businessman's White House campaign, sending Republicans into a panic with just over a month until Election Day and on the cusp of Sunday's crucial presidential debate.

One by one, outraged GOP lawmakers condemned Trump's comments in a 2005 video obtained and released Friday by The Washington Post and NBC News. In the video, Trump is heard describing attempts to have sex with a married woman. He also brags about women letting him kiss and grab them because he is famous.

House Speaker Paul Ryan said he was "sickened" by Trump's remarks and angrily revoked an invitation for the real estate mogul to appear at a GOP event Saturday in Wisconsin. But like most of the many lawmakers who slammed Trump's words as reprehensible, Ryan did not pull his endorsement of his party's nominee.

"I hope Mr. Trump treats this situation with the seriousness it deserves and works to demonstrate to the country that he has greater respect for women than this clip suggests," Ryan said.

But for some Republican officials, Trump had finally gone too far.

"You, sir, are the distraction," said an angry Utah Sen. Mike Lee in a video posted to his Facebook page after Trump issued his midnight apology. "Your conduct, sir, is the distraction."

Lee called on Trump to abandon his campaign, saying it was time for the Republican Party to "expect more. There is no need for us to settle."

Clinton, who spent Friday away from the campaign trail preparing for Sunday's debate, weighed in on Twitter, calling Trump's comments "horrific" and adding, "We cannot allow this man to become president."

For more than a year, Trump's outrageous and often outlandish comments have given Republicans fits. But with some notable exceptions — including nearly all the party's living past presidents and White House nominees — GOP officials have at least nominally thrown their support behind him.

Some of that support has been driven by a belief that Trump needs to at least be competitive in the November election in order to give candidates in down-ballot races a chance to win. The question many Republicans now face is whether the balance will now tip and supporting Trump becomes the riskier position.

Even before Friday's revelations, Trump was struggling to steady his campaign. He had an uneven performance in the first debate and in the following days, bewilderingly feuded with a beauty queen he had shamed for gaining weight.

That incident stunned Republicans, particularly given Trump's desperate need to shore up support among women. But the businessman's comments about the Miss Universe contestant pale in comparison to his words in the newly released recording.

On it, Trump is caught on a live microphone while talking with Billy Bush of "Access Hollywood." The candidate is heard saying "I did try and f--- her. She was married." He also uses graphic terms to describe the woman's body and says he frequently tries to kiss beautiful women.

"Access Hollywood" said an Associated Press story about Trump's lewd behind-the-scenes comments as star of "The Apprentice" led it to dig through its archives and turn up the previously unaired footage from 2005. It was recorded during a bus ride while Trump was on his way to tape an episode of the soap opera "Days of Our Lives."

Trump issued a short apology Friday afternoon, saying he was sorry "if anyone was offended." As he did hours later, he shifted attention toward the Clintons, saying the former president "has said far worse to me on the golf course — not even close."

Trump has spent months hinting he might make the Clintons' marital issues and their handling of the president's affairs a campaign issue. Earlier this week, he said he didn't plan to raise the matters in Sunday's town hall-style debate, but his early morning video suggests he may have changed his mind.

The Republican desperately needs a standout performance in the debate. With his invitation to Wisconsin rescinded, he said he would spend Saturday in New York preparing for the faceoff with Clinton.

Indiana Gov. Mike Pence, Trump's running mate, planned to replace him at the Wisconsin event. Coming off a widely praised performance in Tuesday's vice presidential debate, Pence ignored questions shouted by reporters in Rossford, Ohio, where he was campaigning Friday with his daughter.

A person familiar with Pence's thinking said the Indiana governor was "beside himself" and his wife was furious. That person spoke on the condition of anonymity, because the person was not authorized to share the private discussion.

As Friday became consumed by Trump's vulgarity, Republicans bemoaned another lost opportunity to chip away at Clinton.

The WikiLeaks organization posted what it said were thousands of emails from Clinton campaign chairman John Podesta, including some with excerpts from speeches she gave to Wall Street executives and others — speeches she has declined to release despite demands from Trump.

The excerpts include Clinton seeming to put herself in the free-trade camp, a position she has retreated from. In a talk to a Brazilian bank in 2013, she said her dream was "a hemispheric common market, with open trade and open borders."

But a distracted Trump didn't seem to notice, focusing instead on pushing attention toward Bill Clinton's infidelities even as he apologized for his intemperate remarks.

"We will discuss this more in the coming days," he said at the end of his midnight video. "See you at the debate on Sunday."

President Donald Trump's call for $1.5 billion this year to help build a wall along the border with Mexico could be in... Read More...

WASHINGTON (AP) — It was huge. Big money from billionaires, corporations and a roster of NFL owners poured into... Read More...

Over dozen of VDCs reeling under water shortage in Mahottari

GAUSHALA, Jan 9: Locals of over a dozen of VDCs in Mahottari district have been reeling under acute shortage of... Read More...