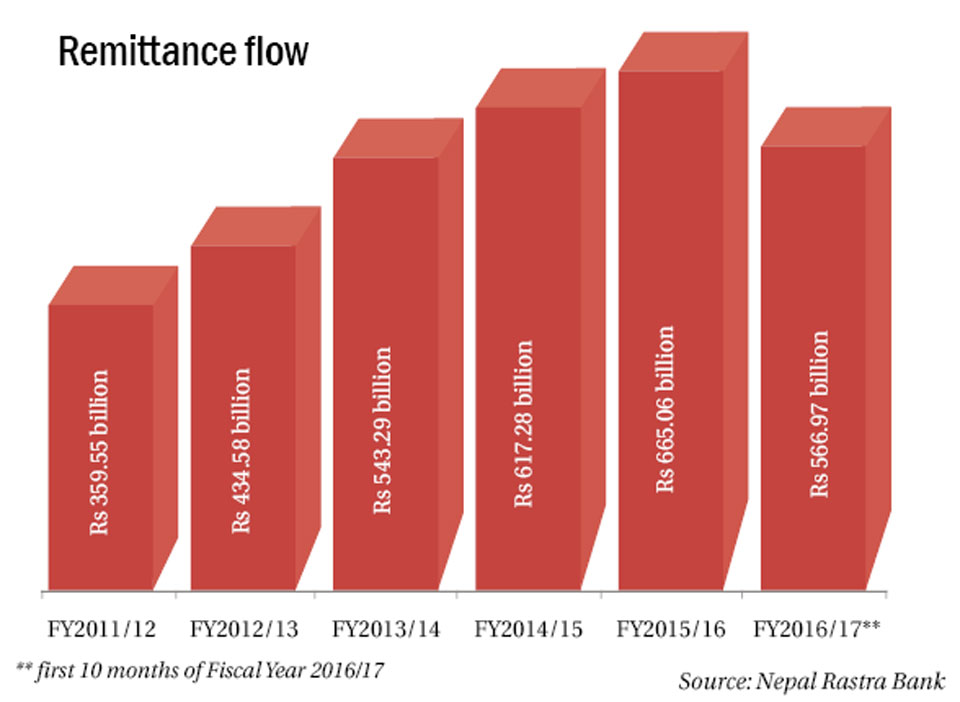 Examples from Latin America and Central Asia suggest over-dependence on income from remittance can be risky.

Remittance is a bulwark against economic woes in many developing countries, Nepal included. It also provides a lifeline in the form of a reliable foreign exchange reserve.

Unlike traditional investment portfolios that are hurt during economic distress, remittance consistently helps with poverty reduction, increase in national savings, and with surplus balance of payment. This may have made developing countries complacent, as in Nepal, where remittance contributes 30 percent to its GDP.

Likewise, Tajikistan depended on Russia as a favorable work hub. Its labor export to Russia was so high remittance hit a record 42 percent of total GDP, the highest in the world. However, after the devaluation of Russian ruble followed by an economic crisis, thousands of Tajikistanis in Russia saw their wages plummet; they had no option but to return to their country. According to the World Bank, the direct impact on the Tajikistan’s households relying on remittance was so severe that they could hardly meet their basic survival needs.

Above examples are instructive for Nepal. Over-dependence on remittance is dangerous. Fortunately, economies of Tajikistan and Latin American countries were strong enough to absorb the shocks. They had viable substitutes for remittance. But Nepal does not have any.

Just as the 2009 recession in the US affected Latin American migrants, and just as the Russian ruble crisis affected Tajikistani migrants in 2014, Nepal could also face great economic crisis that would see thousands of Nepali workers abroad fired from their jobs.
Currently, Nepali migrants from Oil exporting Gulf countries contribute 97 percent of the country’s remittance income. But what will happen when the demand for Nepali laborers in Qatar slowly declines after construction works for the 2022 World Cup ends?

The Gulf Cooperation Council employs great many workers from Nepal. What will happen to them if oil prices suddenly tumble? Or if diplomatic boycotts and geopolitical issues in Qatar and elsewhere are unfavorable? In all these eventualities, the companies will adjust to lower profits with massive layoffs—and Nepali workers will be among the first victims.
All this may result in an economic disaster in Nepal. According to Nepal Rastra Bank,   growth in remittance slowed to 7.7 percent in 2016 after a peak of 27.5 percent in 2015. This growth is predicted to decline further.

The future of remittance, given the geopolitical faultiness in Middle Eastern countries, is bleak. But what will happen to the economy and the households that depend on remittance once its contribution becomes negligible?

In order to cope, we must shift from remittance to manufacturing and service sector industries. Tajikistan and Uzbekistan are building their infrastructure and industries with Chinese investments. Russia too is searching for long-term investments. Ethiopia, an economy built on remittance, is set to become a middle-income country by 2020. It intends to do so by mainstreaming Sustainable Development Goals (SDGs) and improving production to boost trade.

Since remittance alone cannot glue together a fractured economy, it is important for Nepal to start looking for reliable alternatives. We need to focus on productive investments, and both private and public sectors must invest in manufacturing, hydro and IT sectors. The government must be selective while sending its labor force abroad so as to limit worker outflow and create jobs in the country.

Equally important is a carefully designed financial educational program for migrant workers on how to judiciously spend their money, as a large share of remittance is spent on consumption rather than in productive sectors.

As a contingency measure, the government should arrange for stopgap employment for thousands of potential Nepali migrant workers who might return in droves. Since most of them will be unskilled, it will be challenging to use them in specific areas.

We are using remittance as a silver bullet to heal all our economic wounds. Tajikistan, Latin America and many other countries have learned that relying exclusively on remittance is suicidal. Nepal need not meet their fate.

The remittance bubble can burst anytime and when it does, there won’t be a reliable alternative to cushion the impact. Our economy currently stands on the thin ice of remittance. But, as we have seen, remittance can only be a makeshift arrangement while we explore other more sustainable alternatives.

The author is an MBA fellow at Asian Institute of Technology (AIT), Thailand

Let's not overshadow the issues that Prem Archaya tried to raise: Dr Toshima Karki
44 minutes ago