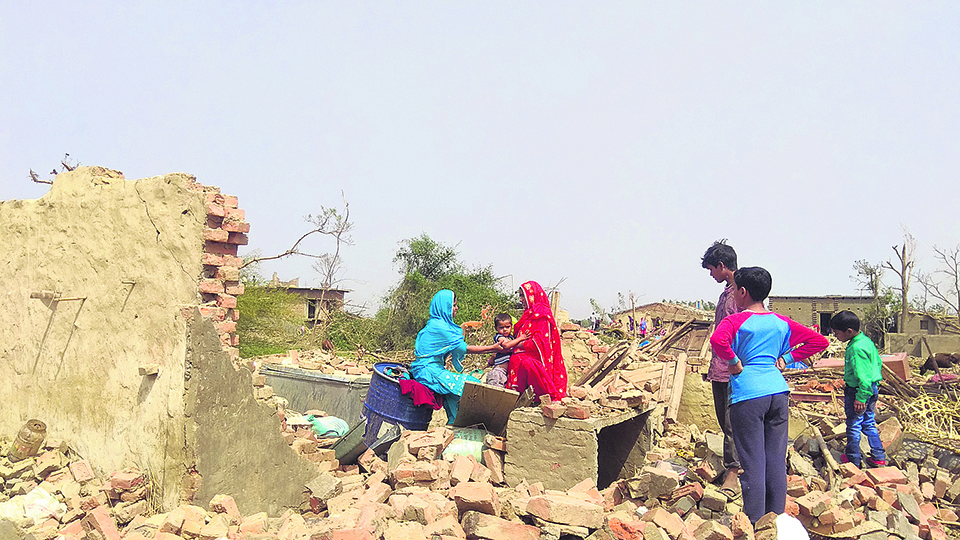 KATHMANDU, April 2: Pledges of help are pouring in for the hundreds of storm-displaced in Bara and Parsa districts.

The Province 2 government was the first to pledge help for the victims. It announced that it would provide Rs 300,000 to the family of each deceased in the storm as interim relief. Shortly afterwards, political parties and other organizations also announced relief for the affected.

A five-member panel headed by Internal Affairs and Law Minister of Province 2 Gyanendra Bahadur Yadav has been formed to coordinate relief and rehabilitation tasks.

Three goods-laden trucks have been dispatched to the two districts. According to the Ministry of Home Affairs, the goods include 468 tarpaulins and 4138 pieces of clothing.

Prime Minister KP Oli, who visited the affected areas, announced he was donating his one day’s salary to the victims. Going one step further, main opposition party Nepali Congress has decided to donate two days’ salary. An NC parliamentary party meeting took a decision to this effect.

The Ministry of Home Affairs has announced it is to bear all medical treatment expenses for those injured in the storm and rebuild infrastructure that was destroyed. Home Secretary Prem Kumar Rai, visiting the affected areas, pledged to rebuild the damaged infrastructures.

Madhes-based Rastriya Janata Party Nepal has announced it is to provide Rs 50,000 for the victims. Likewise, the Federation of Nepalese Chambers of Commerce and Industry has announced cash aid of Rs 5 million.

Major political parties have also mobilized their leaders and cadres to support the victims. The Netra Bikram Chand-led Nepal Communist Party, which has been banned following its involvement in bomb blasts and extortions, has also called on its party leaders to involve themselves in rescue and rehabilitation work.

Over Rs 5 million worth of crops, fruits destroyed in storm in Bara

BIRGUNJ, April 4: Crops and fruits worth more than Rs 5 million were destroyed in the massive storm in Bara... Read More...