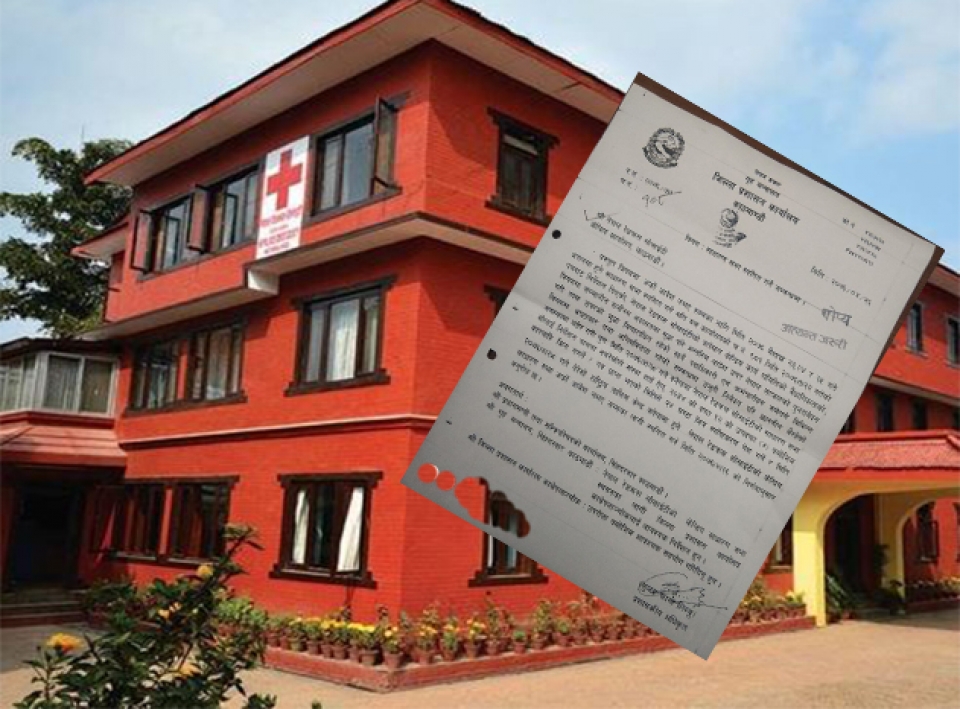 KATHMANDU, Aug 12: District Administration Office, Kathmandu has sought clarification from Nepal Red Cross Society (NRCS) over the alleged financial irregularities in the humanitarian body that receives billions of rupees as donations from foreign countries each year.

In a letter to the NRCS on Sunday, the administration has asked to provide reasonable grounds for not penalizing the NRCS in line with the Sub-section 4 under Section 12 of Associations Registration Act (1977).

The DAO Kathmandu stated in the letter that it sought clarification after the NRCS ignored its instruction to put on hold the NRCS general assembly referring to the ongoing investigation into alleged corruption against NRCS officials.

It is notable here that the Red Cross Working Committee led by the Chairperson Sanjeev Thapa had convened its general convention at Banepa in Kavre on August 13 while violating the instructions by the administration.

DAO Kathmandu earlier dissolved the Sanjeev Thapa-led Working Committee stating that the organization had frequently turned deaf ears to the directives by the Government of Nepal.

Amid the row, the working committee was revived following the interim order by the Supreme Court. However, the apex court has yet to give a final verdict regarding the case. The final hearing in this connection has been rescheduled several times.

In March 2018, the Asia-Pacific regional office of the International Federation of Red Cross (IFRC) had summoned NRCS Chairman Thapa and NRCS Earthquake Response Operation head Umesh Prasad Dhakal to inquire about the organization's alleged involvement in gross misuse of earthquake relief funds provided by donors.  IFRC is an umbrella organization of the NRCS which provides support to the NRCS for executing projects in Nepal.

Even the Geneva-based IFRC headquarters had launched an internal investigation into the alleged corruption in NRCS.

The IFRC sought clarifications over the alleged financial irregularities in earthquake funds as well as other administrative irregularities.

In 2018, documents obtained by Republica showed NRCS had spent Rs 245 million meant for earthquake victims on administrative activities and for the purchase of various luxury items instead of channelizing the money for earthquake reconstruction and rehabilitation.

Similarly, the humanitarian body was found defying government regulations and arbitrarily spending billions of rupees without the seeking approval from the government authorities concerned.

The organization not only renewed its term by bypassing the Social Welfare Council (SWC) -- the authorized government body to oversee the non-governmental organizations operating within the country -- but it was also found to have been running 98 various projects worth Rs 5.044 billion without seeking prior approval from the government body. The SWC had stated that NRCS had been operating arbitrarily despite SWC's repeated requests to submit project details and ensure transparency.