Recovering the bodies was an ordeal: Maj Chaulagain 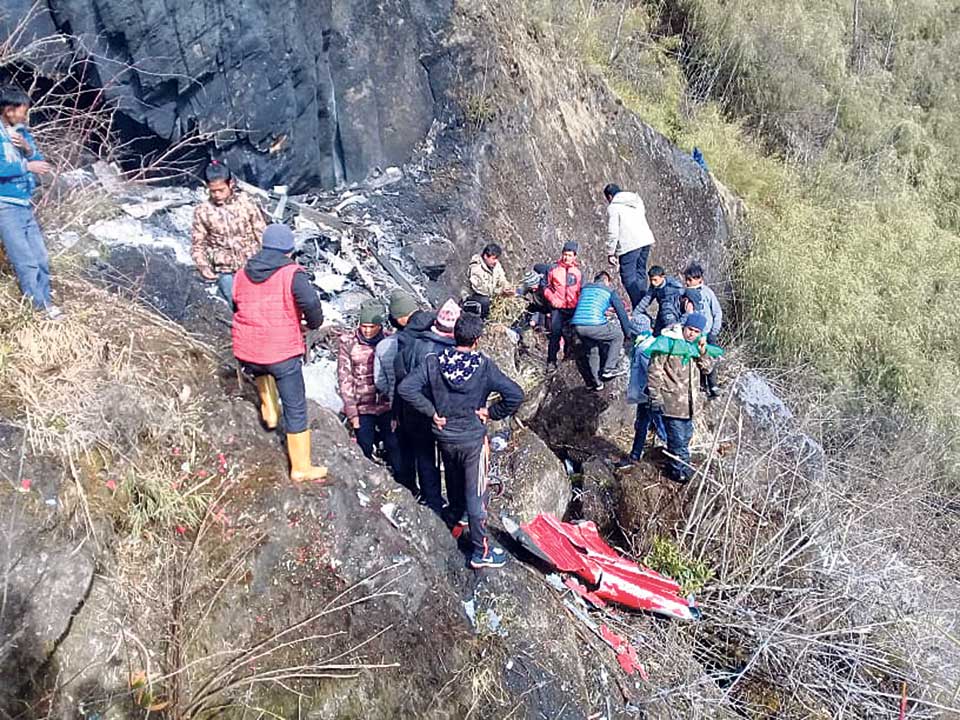 TAPLEJUNG, Mar 1: A salvage team led by Major Chiranjivi Chaulagain of the Nepal Army had to spend a cold Wednesday night near the site of the helicopter crash as they were still trying to retrieve three of the bodies when darkness fell.

By Wednesday evening, the team was able to retrieve only four bodies and bring them to Suketar Airport. The sky had suddenly clouded over and there was thick fog. Shortly afterwards, it started snowing and raining, forcing the team to halt its work.

“It was very cold and snowing hard and we had to sleep against the rock,” said Chaulagain. “We were also hungry and there was no food. We had to make do with some noodles and corn.”

According to him, the team did not sleep well and they waited impatiently for daybreak to resume the salvage work and bring the remaining bodies to Suketar.

DSP Sanjaya Singh Thapa also spent the night at the accident site. As snow fell they managed to light a wood fire and huddle around it. “But the fire lasted only briefly. It was then back to biting cold in the rain and snow.”

The nearest settlement was at least a three hours' walk. At one point, Thapa felt he might not make it through the night due to the unbearable cold. Keeping up the team morale was a struggle.

When the team had reached the accident site, the bodies were scattered all over. They found one body between two rocks nearby. It was badly burnt and bruised.

“We thought it could be the minister's but we couldn't be sure. It took us some time to conclude that it was indeed him,” said DSP Thapa, referring to Minister for Culture, Tourism and Civil Aviation Rabindra Adhikari.

Bringing the bodies back was another nightmare. The cliff was very difficult and it was not possible to land a helicopter. Carrying the bodies manually was out of the question. The only option was to lift the bodies in a basket to the helicopter as it hovered overhead, said Chaulagain.

After the sky opened up on Thursday morning, the team retrieved all the bodies and brought them to Suketar Airport. The locals praised the salvage mission. “The team braved such hardship,” said Om Prakash Rai, a local.

Only 25% of banks' branches to be opened
59 minutes ago