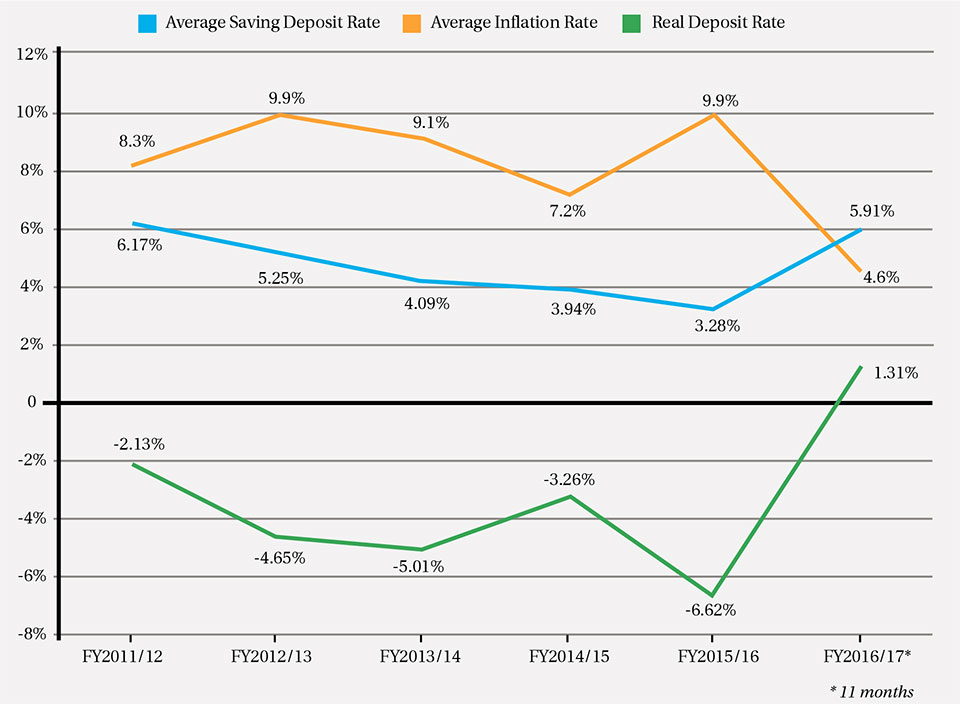 After years of negative real deposit rates, bank and financial institutions (BFIs) are now offering interest rates higher than the inflation rates to their depositors.

“Deposit rates lower than inflation discourages savings of the public. This voiceless section of the society, who have relatively smaller amount of deposit in the banks, would not have any incentive for savings in banks. This helps informal economy to flourish as they tend to park their money outside the banking channel,” said Nara Bahadur Thapa, an executive director of Nepal Rastra Bank (NRB). “The real deposit rate in negative territory encourages speculative investment and would create asset bubbles. This financial repression means lower economic growth whereas the real deposit rate on the positive territory helps to boost economy of the country,” Thapa, who is also the chief of the Research Department of the NRB, told Republica.

The rise in interest rates coupled with falling inflation has provided depositors the real value in their savings that they park in the BFIs.

If the real interest rate is not higher than inflation, which has been a case for at least last five years, investors would lose value of their money.

According to the Nepal Rastra Bank (NRB), real deposit rate remained at 1.31 percent in the last fiscal year 2016/17 (over 11 months) as inflation rose by 4.8 percent, while the average saving rate on deposits stood at 5.91 percent. Such real deposit rates had been negative for at least last five fiscal years.

Real deposit rate is the interest rate that a depositor gets from a bank after adjusting inflation rate.

Fiscal Year 2015/16 was the worst for depositors in terms of yields as real deposit rate was negative by 6.62 percent. BFIs had offered a meager 3.28 percent interest return on deposits, while average inflation rate had skyrocketed to 9.9 percent.

However, too high saving rate can also cause worries for many. Rising deposit rates would also drive up lending rate which makes borrowing costlier for industries. The rise in cost of production for industries would build inflationary pressure in the economy.

KATHMANDU, Sept 3: Loan disbursements of commercial banks surpassed deposit mobilization in the first one and half months of the... Read More...

KATHMANDU, Aug 20: Here is some good news for people who are fed up with ultra-low interest rates offered by... Read More...