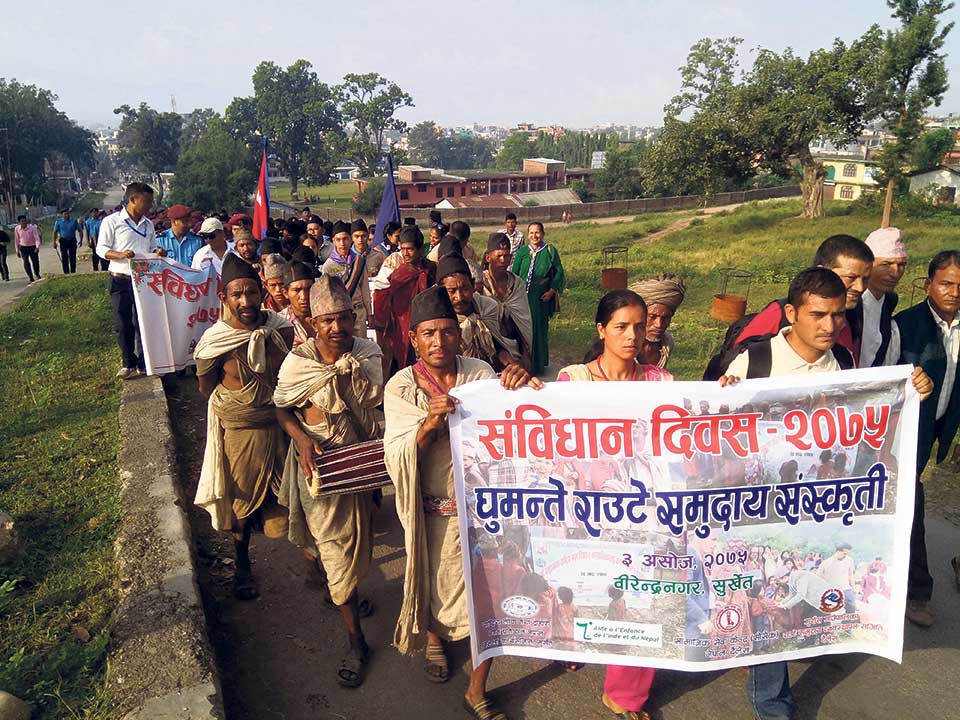 Members of the nomadic Raute community participate in a Constitution Day parade in Birendranagar, Surkhet on Wednesday. The Rautes were brought to the parade by an NGO and a local government unit with a promise to provide them Rs 300,000 and new shoes. | Photo: Nagendra Upadhyaya/Republica

SURKHET, Sept 20: Raute leader Bir Bahadur Shahi has no idea what does constitution mean. People of his community refuse to obtain citizenship certificate and continue to live the nomadic life in forests. However, a non-governmental organization of Dailekh and the local unit brought Rautes from Gurans Rural Municipality-8 to the provincial capital Birendranagar on Tuesday to include them in a constitution day parade.

On Wednesday, they marched holding the banners of Social Service Center (SSC) and Gurans Rural Municipality. The march commenced from Mangalgadhichowk and ended at Khulamanch [open air theater].

We came here after they promised us money and new shoes. -- Raute youth Lokendra Bahadur Shahi.

According to Dil Bahadur, they agreed to participate in the march after the organization offered them a total of Rs 300,000. Altogether 15 members of this community participated in the march. After concluding the march, Raute leader Dil Bahadur said, "The function is over but we have yet to receive the promised amount."

Despite taking part in the celebrations, Rautes did not know what were the celebrations about. "We came here after they promised us money and new shoes," said Raute youth Lokendra Bahadur Shahi. Hira Singh Thapa, Chairperson of SSC admitted that the organization brought the Rautes by promising payments.

After Mexico quakes, Day of the Dead parade honors rescuers

KATHMANDU, May 9: The Office of the Prime Minister and Council of Ministers has provided Rs 500,000 to assist in... Read More...

There is no point in asking for resignation of Working Committee: CAN President Chand
55 minutes ago

Agitating IOM students stage sixth round of protest against Dean (Photo Feature)
2 hours ago
If you want to seek your property share, go to Baluwatar: MP Agrahari
3 hours ago