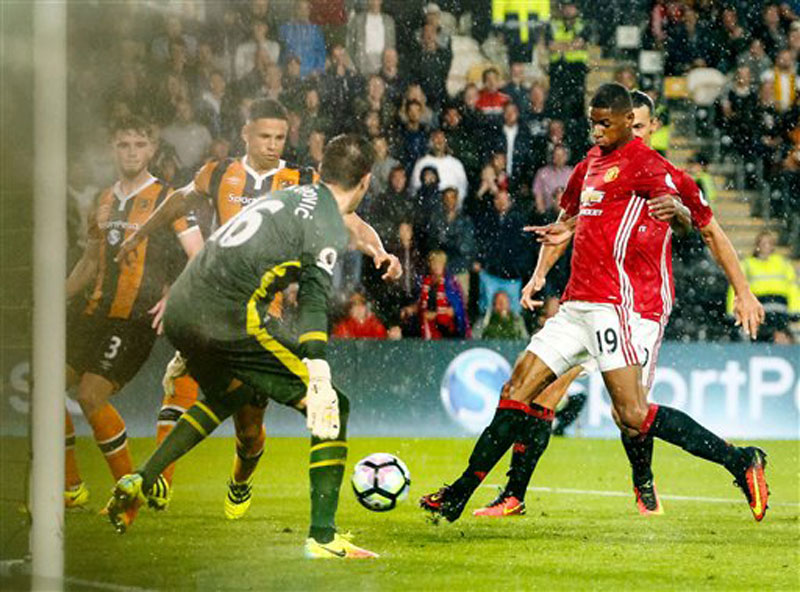 HULL, Aug 28: Substitute Marcus Rashford scored in the second minute of stoppage time to earn Manchester United a 1-0 win at Hull and a third straight victory to open the English Premier League on Saturday.

Rashford capped an impressive cameo as a 71st-minute substitute by tapping in from close range after Wayne Rooney cut in from the left and sent across a low ball.

After previous wins over Bournemouth and Southampton, United was on course to drop points for the first time this season in the face of an obdurate defensive performance by promoted Hull, which also won its first two games.

Zlatan Ibrahimovic's three-match scoring run came to end, but United was saved by a striker at the opposite end of his career. The 18-year-old Rashford burst onto the scene in the second half of last season, earning a place in England's European Championship squad, but has been displaced by Ibrahimovic under new coach Jose Mourinho.

"We deserved it and in a more comfortable way," Mourinho said. "We had an amazing mentality. We tried and tried and got it.

"I tell the boys every day, we have to go into every match to win. We know we will draw or lose matches but the mentality has to be, 'Go to win.' Today they showed that."

Hull has been the surprise team in the first weeks, winning its first two games despite having no permanent manager, a slew of injuries, no signings since the end of last season, and with its owners looking to sell up.

They fell agonizingly short of taking away a point from the KCOM Stadium, having spent almost the entire match on the back foot

Ibrahimovic was looking to become only the second United player, after Jimmy Hanson in 1924-25, to score in his first four games for the club but the Swedish striker was shackled well by Hull center back Curtis Davies — possibly the best player on the field. United's other high-profile signing, Paul Pogba, also had a quiet game and was off target with two decent sightings of goal from the edge of the area.

Rashford and fellow substitute Henrikh Mkhitaryan gave United something different when they come on as substitutes, offering pace and direct running. It was Rashford's first appearance of the season in the league, having been an unused sub in the first two games.

Rashford had a low shot tipped around the post and Mkhitaryan had a goalbound shot blocked by Davies, but Hull finally caved in.

Availability of animal carcasses attracting vultures to Tanahun
39 minutes ago