Rape cases on the rise 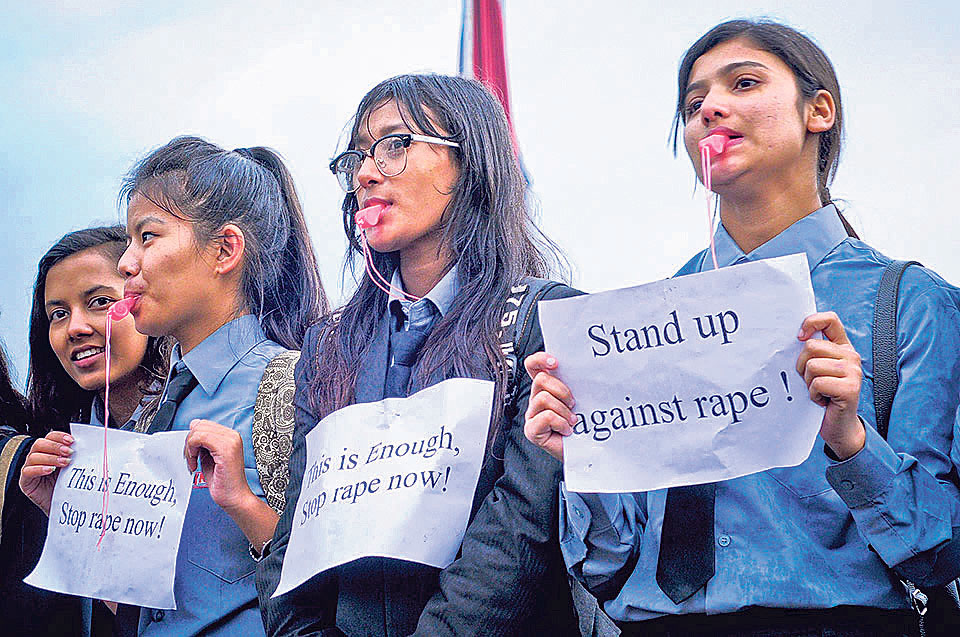 Republica Girls protest against rape and violence against women in this undated photo.

SURKHET, July 14: A 15-year-old girl from Barahatal Rural Municipality of Surkhet was gang raped on June 16 while she was in Chhaugoth (menstruation hut). Three young boys raped her at around half past ten. Her family members came to know about it only in the morning. The girl who was found unconscious at the shed is still receiving treatment at a local hospital of Kalagaun. The accused Janak Sharma, Chetan Giri and Padam Giri are in police custody as the case in under investigation.

No sooner than this case came to light, a 32-year-old differently-abled woman also became a victim of gang rape. The woman from Panchapuri Municipality walks with the help of crutches. On Wednesday night, she was reportedly raped by a local Pradeep Gahamagar at her own home. According to the victim, she was raped while she was sleeping with her two young sons. The next day, instead of consoling the victim she was instead beaten by the kin of the accused. Police have already arrested the accused.

While the cases of rape are getting rampant in Surkhet and other districts, another dangerous trend of murder after rape is also getting common. After raping her, perpetrators killed 18-year-old Gorikala Rokaya in Surkhet on March 27. This incident took place while she was staying at a rented house in Bibiyachaur for the examination of SEE.

What is shocking is that a traffic police, Hari Koirala, has been booked in this case. Apart from Koirala, Khum Bahadur Bastola of Majhigaun and his brother Laxmi Bastola are also in police custody. Khum Bahadur is 28 and Laxmi is just 20.

Police data shows that the cases of rape are shooting up. This fiscal year, 30 rape cases and 16 attempts to rape have been filed so far. Last year, 26 rape and 11 attempt to rape cases were filed. Before that, the number of rape cases was 22 and 14 attempt to rape.

“It is constantly on the rise. Data shows that it’s only growing and girls as well as women are vulnerable,” said Prem Prasad Regmi, information officer at the District Police Office.

“It is not just in the district headquarters of Surkhet but rape cases are rising in all societies here. We need to conduct awareness campaigns to counter this,” he said.

Although more number of rape cases has been registered of late, a lot of such cases go unreported. According to locals, settling the matter between the victims and perpetrators is still very common.
“Rape cases are still not reported by all the victims. In many families, they want the victim to keep quiet because it is linked with family prestige,” said a local of Surkhet requesting anonymity. He added that such cases go unreported also because of the threat from the perpetrators.

Worse still is the way a family of rape victim is socially ostracized. Social insecurity of a raped girl and her family has made it tough for victims to open up in such cases and fight for justice.

A few months ago, Yubaraj Sharma, a teacher of Janajyoti Lower Secondary School of Panchapuri-10 was booked for raping his own students. Reportedly, he fed medicines to two girls sexually arouse them and then raped them. The victims got him arrested after a verbal complaint, but they did not file written complaints. So he was later freed.

Police attribute the rising number of rape cases to the use of mobile phones and internet, among others. Basically, the new generation is falling in the trap of technology, police say.

“The young minds cannot differentiate between the use and misuse of mobile and internet. They are seen to be badly influenced,” said Regmi.

“Since they cannot handle the technology and messages properly they happen to fall in trap. Many rape cases these days are the result of this,” he added.

Police state that punishment alone does not help curb the crime. There is a need to reach to the root cause of the problem, they say.

Regmi pointed out the need for running special courses in schools and colleges to boost the morale and positive attitude of students. “If we want a healthy society, we have to make a similar effort, a wholesome effort,” he noted.

Rape cases up in Udayapur

UDAYAPUR, June 28: Number of rape cases in Udayapur district has escalated in the current fiscal year, according to a... Read More...

KATHMANDU, April 29: A total of 795 cases of rape have been registered so far in the current fiscal year, according... Read More...