Rani Pokhari reconstruction fails to restart even after a year 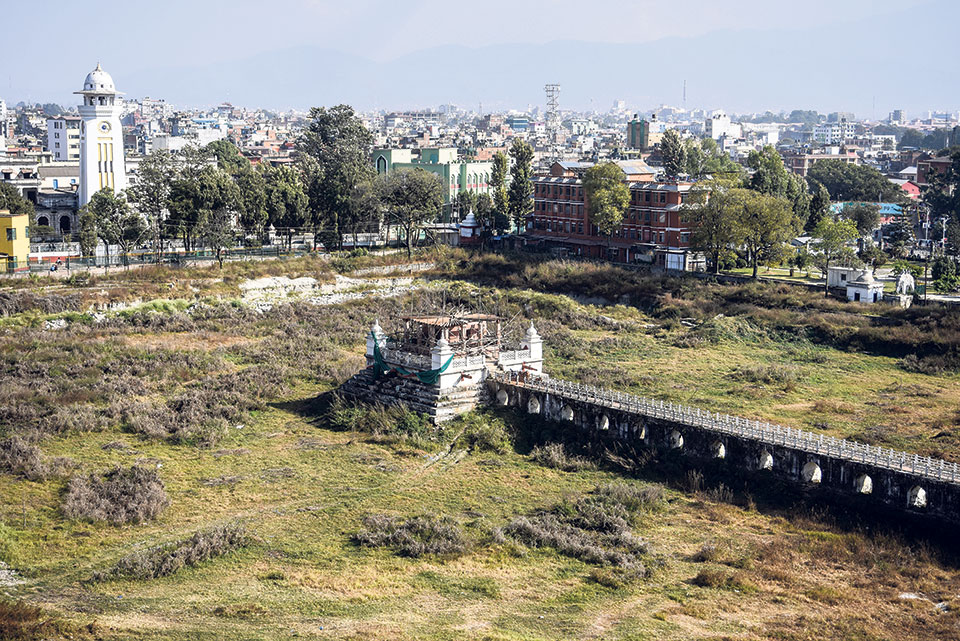 KATHMANDU, Jan 3: The reconstruction of the temple in the middle of the Malla-era Rani Pokhari (Queen's pond) which was heavily damaged by the 2015 mega earthquakes is yet to start even a year after the reconstruction works were halted following widespread protests for not complying with the archaeological values of the historic pond back then.

Earlier, a meeting of the officials from the National Reconstruction Authority (NRA), Department of Archaeology (DoA) and Kathmandu Metropolitan City (KMC) had decided to rebuild the temple of the historic pond in the same style it was previously constructed.

After the meeting, the NRA had handed the responsibility of the reconstruction of the temple to the DoA while the KMC was told to demolish the concrete structure it had constructed to make a new wall and other structures of the 17th-century pond in ancient style.

Heritage conservationists have criticized the DoA for failing to restart the reconstruction of the Matrikeshwar Mahadev temple at the center of the pond and the metropolis for not paying any attention to the demolition of the concrete wall it had constructed.

“One of the bidders had incomplete paper works; another had not paid its taxes while the remaining one had made a bid of an amount which was 11 percent more than that estimated by the metropolis,” he said, adding that the metropolis is planning to issue another tender notice soon.

In December 2017, heritage conservation activists had protested against Kathmandu Metropolitan City's plan to reconstruct a café and a fountain around the pond using concrete materials and modern style. By the time that the metropolis stopped its works, it had already constructed a concrete boundary wall on the southeastern part of the pond squandering more than Rs 25 million in the process.

KATHMANDU, July 3: An employee of the hostel of KMC School in Buddhanagar of Kathmandu has been found dead. ... Read More...

Social security allowance at your doorsteps through mobile banking

Four tigers released back into the wild

NAWALPUR, July 3: The Chitwan National Park has released four tigers to their natural habitat this year. The tigers were... Read More...