Ranger on a mission 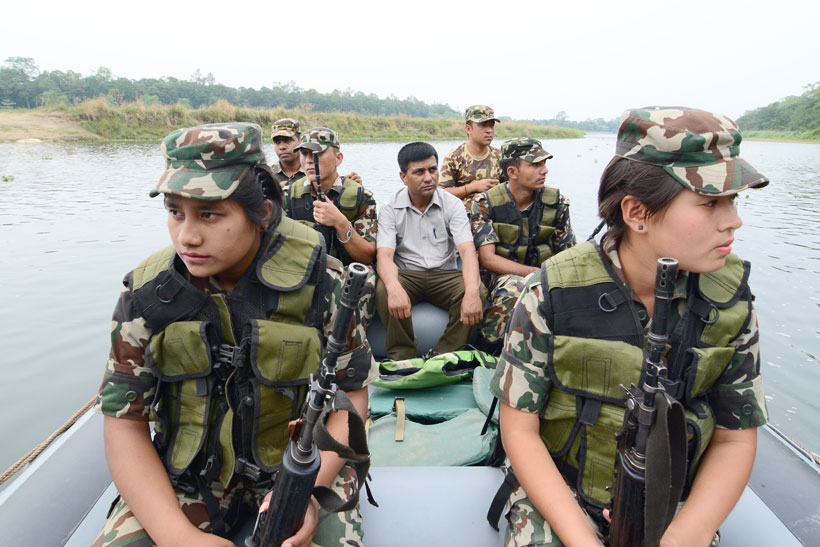 Of the 700 people who Laxman helped arrest over the years, 160 are still in prison. Many, according to him, are repeat offenders.

“I understand that my work in anti-poaching involves considerable risk. I might even lose my life one day. But I’m not afraid. It will be one more life lost in the line of conservation duty. And that in itself will be an honor for me.”

For a person who has made 700 arrests in over 20 years, Laxman Ray, ranger at Chitwan National Park, is an example in modesty driven by the passion to protect what he calls nature’s gift to Nepal.

Literally, on the frontlines of the fight against wildlife crime, Laxman has been working on anti-poaching in the national park since 1993. With modest beginnings in the national park in 1989, Laxman’s first experience in anti-poaching came as a game scout, moving upwards slowly to his present position in the park’s anti-poaching unit. Chitwan National Park is home to the biggest population of tigers and rhinos in Nepal and is also one of the country’s strongholds in curbing threats from poaching and illegal wildlife trade.

“Information is power, a key asset that can help keep a check on poaching before it happens.”

Laxman feels encouraged in knowing he is not alone in the fight against wildlife crime. The Nepal Army within the park is his biggest pillar of strength with whom he works together in keeping a look out for any poaching activity in the forests. He also received constant encouragement from senior officers of the Department of National Parks and Wildlife Conservation to work for nature and wildlife conservation. Outside the park, he has found friends in the local communities who are his eyes and ears on any suspicious activities in the surrounding villages.

If not on a jungle patrol, one can find Laxman in the communities, in local bars, teashops, and even barber shops. For Laxman, the sphere of his work centers on information and intelligence both within the park and outside to enable him as far as possible to take action against wildlife crime before it happens.

With the help of the Nepal Army, Laxman has been able to expand access and reach within the national park, on land, water, and air. Traditional foot patrols have been complemented by elephant and jeep patrols allowing anti-poaching teams greater area coverage and domination. With WWF and Whiskas support, a boat and bicycles were provided to help access areas by river and on land, which has further helped to increase the coverage of the patrols.

He welcomes the government’s initiatives to introduce new technologies to aid patrolling efforts and build anti-poaching effectiveness. Real-time SMART patrolling using mobile phones with GPS and a special patrolling app has helped strengthen coordination between on-the-ground teams and the park headquarters and allowed for swift anti-poaching response, while unmanned aerial vehicles have proved to be important deterrents for poachers who feel they can also be watched from the skies.

Within the local communities, Laxman lays strategic focus on areas with past poaching records where he works with informant networks and local groups such as community-based anti-poaching units and rapid response teams to help him gain intellect on anything that appears suspicious. “It could be as simple as a feast in the village when we know that there is no particular reason to celebrate. That is when the local groups are on their guard to know who were part of the feast and whether that could be a precursor to a possible poaching event,” Laxman says.

“If you can make friends with the enemy, you can open up a whole new chapter of understanding and meaning of how poaching works.”

Firstly, it is a show of empathy on his part to understand the motives of the poacher driven primarily out of poverty and to convince them on the ways and means towards an honorable living. Secondly, it helps him unlock the mind of a poacher and dig out crucial information on poaching routes and networks which he might have never known working on the other side of the battle.

Of the 700 people who Laxman helped arrest over the years, 160 are still in prison. Many, according to him, are repeat offenders while some have in fact mended their ways. Through sustainable livelihoods programs established in the buffer zone communities, many poachers have been able to find alternate sources of livelihoods and also provide leads to frontline staff such as Laxman on poaching routes and networks.

“Nepal’s zero poaching success has not come easily. But we have shown that it is possible by working together.”

For Laxman, the darkest period was during the insurgency in 2002 when Chitwan National Park alone lost 37 rhinos to poaching in a single year. Though the park had made numerous arrests and confiscated arms from various locations in the park, the scale of poaching back then was too large to contain given the limited resources and reach of the park authorities. Poachers began to move away from surrounding buffer zone areas to base themselves further off and enter the park by crossing the bordering Chure hills as an alternate route. It was only by mobilizing informant networks away from the buffer zone strongholds that alternate routes could be tracked and poachers brought to book. It was during this time that they were able to nab a network of 17 rhino poachers.

From 37 rhinos poached in a year to zero for four years, Laxman feels Nepal has come a long way in the fight against wildlife crime. Rhino numbers are at an all-time high of 645 and tiger populations have jumped by 63% between 2009 and 2013.

“Back in 1993, I made my first arrest of seven people involved in rhino poaching. It was a feeling of accomplishment for me. I realized if we were to put our heart and mind to it, we could break this cycle of crime. And every time the newspapers publish stories of Nepal’s zero poaching success, I feel proud to be a part of it,” Laxman says.
“But one day I will need to leave this uniform. It could be the only thing that is protecting me till now.”

Laxman speaks for the many men and women who put duty before self to protect Nepal’s iconic species – everyday. While their passion for conservation is a key motivator, Laxman feels that there could be added incentives to urge them further. One example he gives is personal insurance which is presently lacking for frontline staff. In addition, he feels that beyond incentives, required antipoaching facilities, training and equipment really help such staff work more effectively. The anti-poaching work of the rangers and the army in Chitwan has really benefited from the support of organizations such as WWF, for example through the provision of solar panels at guard posts, tents and sleeping bags.

These all help the patrol teams in their dedication and ambition to maintain zero poaching.

Also, Laxman’s own motorbike is now over five years old and has been his companion in antipoaching in its journey of more than 50,000kms!

“My wife and two children look up to me as their hero, of our family and in the work that I do. I feel I have many expectations to live up to. I have one life to do it, but I think it’s more than enough.”