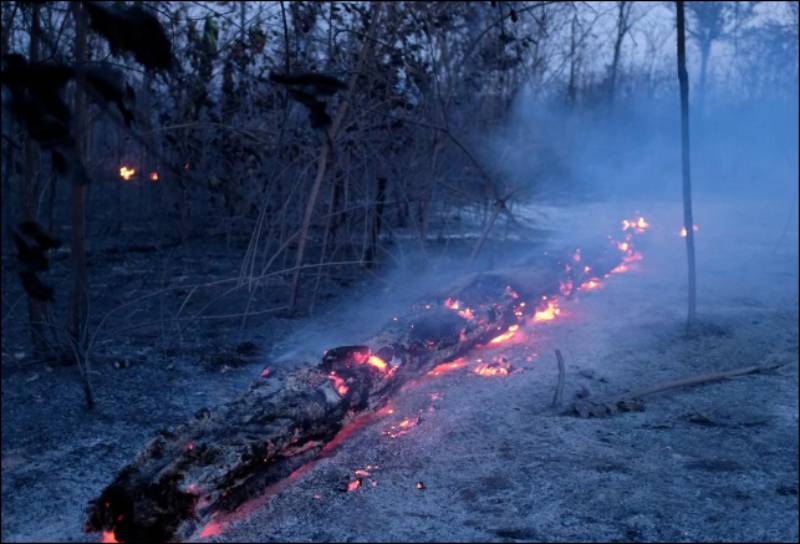 BRASILIA, Aug 27: Weak rainfall is unlikely to extinguish a record number of fires raging in Brazil’s Amazon anytime soon, with pockets of precipitation through September 10 expected to bring only isolated relief, according to weather data and two experts.

The world’s largest tropical rainforest is being ravaged as the number of blazes recorded across the Brazilian Amazon has risen 79% this year through August 25, according to the country’s space research agency.

The fires are not limited to Brazil, with at least 10,000 square kilometers burning in Bolivia near its border with Paraguay and Brazil.

While Brazil’s government has launched a firefighting initiative, deploying troops and military planes, those efforts will only extinguish smaller blazes and help prevent new fires, experts said. Larger infernos can only be put out by rainfall.

The rainy season in the Amazon on average begins in late September and takes weeks to build to widespread rains.

The rain forecast in the next 15 days is concentrated in areas that need it least, according to Maria Silva Dias, a professor of atmospheric sciences at the University of Sao Paulo. Less precipitation is expected in parts of the Amazon experiencing the worst fires, she added.

The far northwest and west of the Brazilian Amazon rainforest will see more rain in the coming weeks but the eastern parts will remain very dry, Refinitiv data show.

Even areas with more rain will only get isolated showers, the experts said.

“In some points, you could put out some fires, certainly, but these are isolated points, it’s not the whole area,” Dias said.

“The whole area needs it to rain more regularly, and this will only happen further down the line, around October.”

Enough rain has to be concentrated in a short enough period to put out a fire, otherwise, the water will just evaporate, Dias said.

She estimated it would take at least 20 millimeters of rain within 1-2 hours to put out a forest fire, with more required for more intense blazes.

The state of Acre, in the west of Brazil on the border with Peru, is expected to get more fire relief from rains than most of the Amazon. The number of fires in Acre has more than doubled so far this year compared with the year-ago period, with 90 fires registered from Aug. 21-25 alone, according to INPE data.

Rondonia and southern Amazonas state are expected to get 15-29 mm across the area in the next 15 days.

“In some areas, it could reduce the fires, not in general,” said Matias Sales a meteorologist for Brazil weather information firm Climatempo.

The 15-day rain forecast is at or below the average for this period in previous years, according to Climatempo.

The eastern Amazon will stay dry over the next 15 days, with little or no rain in parts of Mato Grosso, Para and Tocantins where fires are up 54% to 161% compared with last year.

The dry season, which varies among parts of the Amazon but runs several months up to September, has been particularly dry this year, Dias said. Mato Grosso has been parched by a cold front that hit earlier in the year, she said.

Dias said she hoped the military would help to prevent new fires but putting out existing fires is a tougher task.

“The small fires will be extinguished but the big fires will go on for a while,” she said.

KATHMANDU, July 25: Low visibility due to bad weather caused cancellations of many domestic flights to and from Tribhuvan International Airport... Read More...