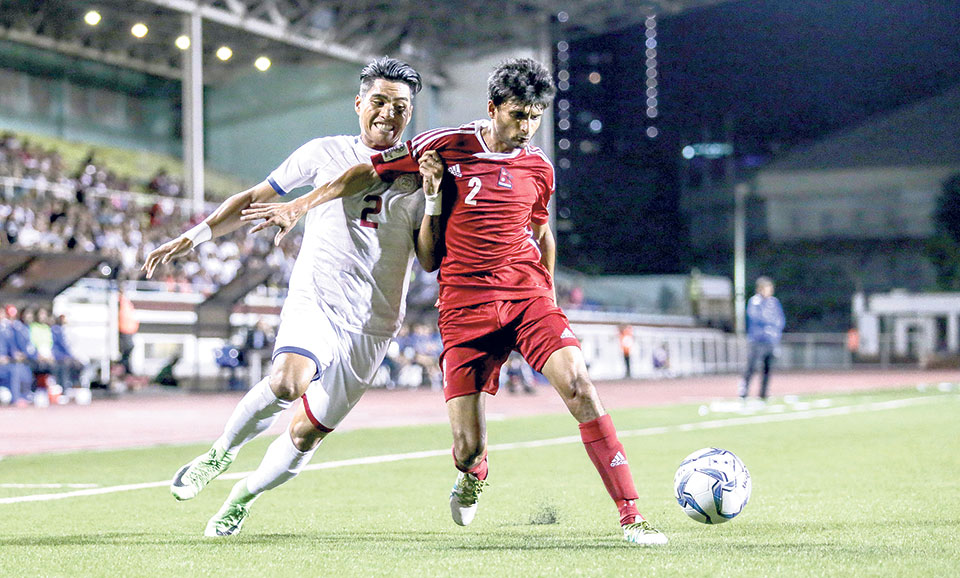 Nepal’s Rabin Shrestha in action against the Philippines during an AFC Asian Cup 2019 Qualifiers match in Manila, Philippines in this file photo. (Agencies)

The Japanese coach Koji who took charge of Nepali team in 2016 March, has used 4-4-2 playing system in most of the occasions.

However, he will play three central halves at back in 3-4-3 or 3-5-2 when his team meets Tajikistan for the second time in Group F of the competition. Nepal, which is in the bottom of the group with just one point from three matches, had suffered 2-1 defeat to third placed Tajikistan at home.
“We don’t have decent left-footed fullback in the team, so to fill the void I am changing the whole playing system this time,” Koji had said before flying to Tajikistan. “If we had Rabin Shrestha in the team, there would be less chance for such change in playing system.”

Unavailability of the reliable left back Rabin Shrestha, who is out due to knee injury since March, is one of the major reasons why Koji is forced to change the system.

Nepal Police Club (NPC)’s 27-year old defender Rabin had picked a knee injury during Nepal’s first match in the Qualifiers, against the Philippines. He is still four months away from comeback.
As the Nepali team does not have a single left-footed defender, Koji played right-footed Kamal Shrestha in left back role in the absence of Rabin Shrestha.

However, the Manang Marsyangdi defender has not been able to make similar impact in the team like Rabin.

Left back is a very important position in the modern football with the responsibilities of both defensive protection and offensive contribution in the team.

Rabin, who made debut at the age of 17 for the national team during AFC Challenge Cup encounter against North Korea in 2008, has always been consistent in that left back role.

Nepali team has always benefited from Rabin’s overlap runs from wings and pin-point crosses in the box for forwards. At the moment, Koji misses Rabin’s tactical brilliance and the partnership with the wingers on the wide to create clear cut chances in the final third. “He is a very clever player. Team misses his attacking attributes and defensive commitment for the team,” said Koji.
Raju Kaji Shakya who is assisting Koji in the national team always praises Rabin’s work ethics. “He is physically tall but he always gives his all in the game. He keeps running until the last second of the match. His work ethic is what makes him one of the top players in the country,” said Shakya.

“Not just Nepali coaches, but foreigners also like him and always pick him in the team,” Shakya added.

Rabin always has been regularly chosen in the national team by every foreign coach, from Graham Roberts to Koji.

Rabin also rues over missing the chances to play for his country in continental championship’s qualifiers which is definitely top level competition for Nepal. “It is without doubt a high-level tournament for our team given the opponents we are facing. I would have loved to play as it would have helped me to be better player,” said Rabin, who has represented Nepal in last four editions of SAFF Championship.

“I had gone to the national team training to meet fellow players. They told me that the team is missing me and it was good to hear. But I think team has many talented players who are capable of helping the team to produce positive results,” he added.

Rabin has now started jogging, and targets a return for the upcoming A Division League to begin after two months.

“Although I have to follow the instruction of my physiotherapist, my target is to make comeback in the league. I will miss early part of the league but will definitely have role in the remaining matches,” said Rabin who has helped his departmental team NPC win two A Division Leagues and one National League besides many other domestic tournaments.

KATHMANDU, March 17: Skipper Anil Gurung has been axed from the national football team while three other players have made comeback... Read More...

Messi says he will again play for Argentina's national team