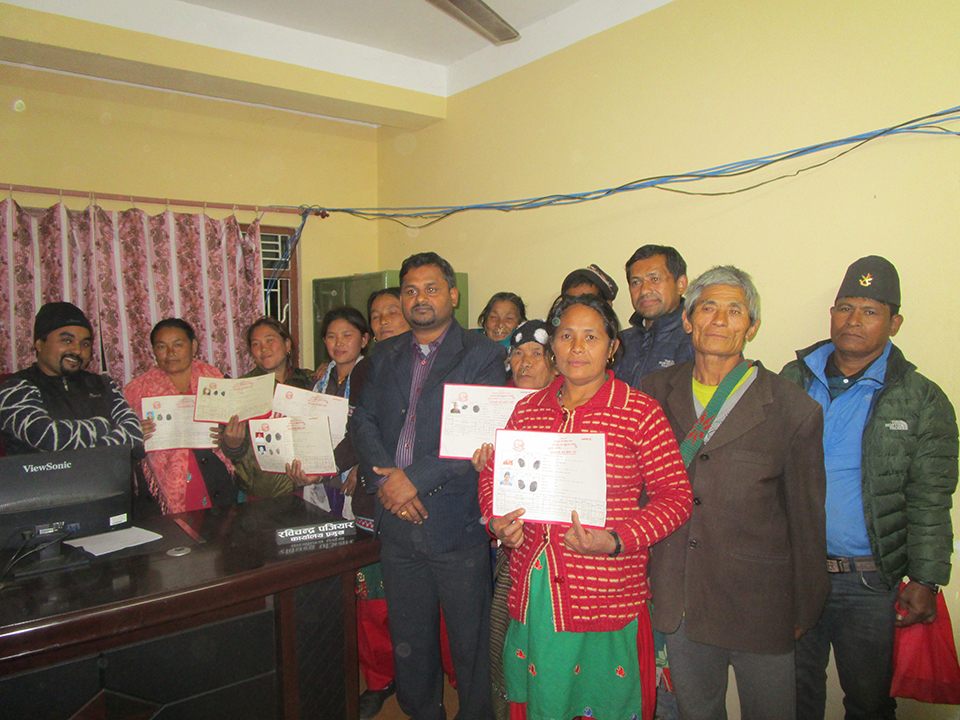 DHADING, Mar 4: Twenty-four households of Khaniyabas and Rubi Valley Rural Municipalities, who were displaced by the devastating earthquake of 2015, have been provided land and land ownership certificates.

The government had announced that it would provide Rs. 200,000 to quake victims who have no land for rebuilding their homes. It had published the names of 200 such victims in a first lot. As 24 households included in the list met all the criteria, the government offered them Rs. 200,000 each for purchasing a piece of land.

Kamishya Tamang of Khaniyabas Rural Municipality-4 was left helpless after the earthquake reduced her house to rubble and her land developed fissures.  She is now elated that she has a piece of land and the ownership certificate to go along with it. "I hope life will be more peaceful after we build our house," said Tamang.  Her family had been sheltering in makeshift tents and living in constant fear of being swept away by the landslide. "Rain in the monsoon, landslips in winter and soaring temperatures in summer took their toll," she added.

With the money provided by the government, Tamang was able to buy a small piece of land for her new house. She has also received the first tranche of the reconstruction grant. She is now ready to start building the house.

A team of former lawmakers had recommended 46 settlements in Tipling, Sertung, Lapa, Jhalarng and Rigaun  VDCs in Dhading to the district disaster management committee for relocation to safer spots. As the quake-displaced of the five VDCs were at high risk from landslides, the lawmakers had urged their immediate relocation.

A team of technicians from the government has already conducted a geographic survey of 10 villages including Tipling, Sertung, Lapa and Semjong. The results of the study are yet to be published. Ravi Chandra Panjiyar, chief of National Reconstruction Authority (NRA) Dhading, said many more victims will be provided land for home building.
Those who are to receive the land grants have to make out a joint land ownership certificate in the name of both husband and wife.  NRA will deposit the relief amount in the bank account of the landowners on the basis of the joint ownership certificate and other documents. The victims have to be certified by the ward or rural municipality office that they do not have any other land for housing.

A large number of people in Dhading were left homeless by the earthquake. While many are still living in makeshift tents other have rented rooms at district headquarters.

MAKWANPUR, Aug 6: In the name of asset, all he had was a small field. But the landslide triggered by the... Read More...