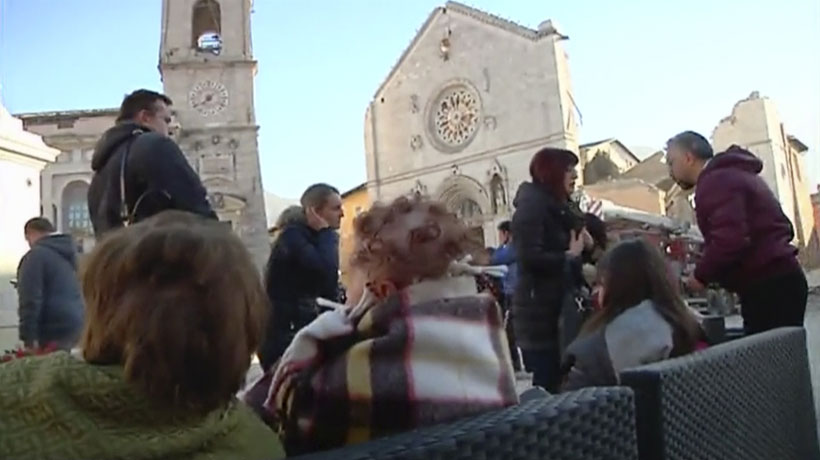 In this image made from video, residents who fled from their houses gather in a square in front of a damaged church in Norcia, Italy, Sunday, Oct. 30, 2016 after a powerful earthquake with a preliminary magnitude of 6.6 rocked central and southern Italy following a week of temblors left thousands homeless. (AP)

ROME, Oct 30: A powerful earthquake with a preliminary magnitude of 6.6 has rocked the same area of central and southern Italy hit by quake in August and a pair of aftershocks last week, sending already quake-damaged buildings crumbling after a week of temblors that have left thousands homeless.

The head of Italy's civil protection agency, Fabrizio Curcio, said there were no immediate reports of deaths, but said some people had suffered injuries as numerous buildings that had resisted the previous temblors collapsed. He did not provide details on the injured.

Residents already rattled by a constant trembling of the earth rushed into piazzas and streets after being roused from bed by Sunday's 7:40 a.m. quake. Many people still had been sleeping in cars or evacuated to shelters or hotels in other areas after a pair of strong jolts last Wednesday.

Television images showed nuns rushing out of their church and into the main piazza in Norcia as the clock tower appeared about to crumble. One had to be carried by firefighters, while another was supported as she walked.

The mayor of quake-hit Ussita said a huge cloud of smoke erupted from the crumbled buildings.

"It's a disaster, a disaster!" Mayor Marco Rinaldi told the ANSA news agency. "I was sleeping in the car and I saw hell."

Another hard-hit city, Castelsantangelo sul Nera, also suffered new damage. In Arquata del Tronto, which had been devastated by the Aug. 24 earthquake that killed nearly 300 people, Arquata Mayor Aleandro Petrucci said, "There are no towns left."

"Everything came down," he said.

The quake was felt throughout the Italian peninsula, with reports as far north as Bolzano and as far south as Bari. Residents rushed into the streets in Rome, where ancient palazzi shook, swayed and lurched for a prolonged spell.

Austria's governmental earthquake monitoring organization said the quake was felt to varying degrees in the east and south of the country and all the way to the city of Salzburg. It says that at its strongest, residents in upper floors noticed a swaying sensation and a slow swinging of hanging objects.

The head of the civil protection authority in Italy's March region, Cesare Spuri, said there have been reports of buildings collapsing in many cities.

"We are trying to understand if people are under the rubble," Spuri said.

In Norcia, nuns knelt in prayer and a firefighter appealed to a priest to help maintain calm among dozens of residents gathered there, including some in wheel chairs.

The church, which had withstood the August earthquake in August and last week's aftershocks, still was standing, but television pictures showed piles of stone had accumulated at the bottom of one wall. One stone was thrown meters into the center of the piazza, illustrating the quake's force.

"We have to keep people calm. Prayer can help. I don't want people to go searching for family members," the firefighter appealed as cameras from SKY TG24 filmed.

The German Research Centre for Geosciences put the magnitude at 6.5 and said it had a depth of 10 kilometers, a relatively shallow quake near the surface but in the norm for the quake-prone Apennine Mountain region.

In pics: People celebrate Gaijatra in Sankhu
11 minutes ago