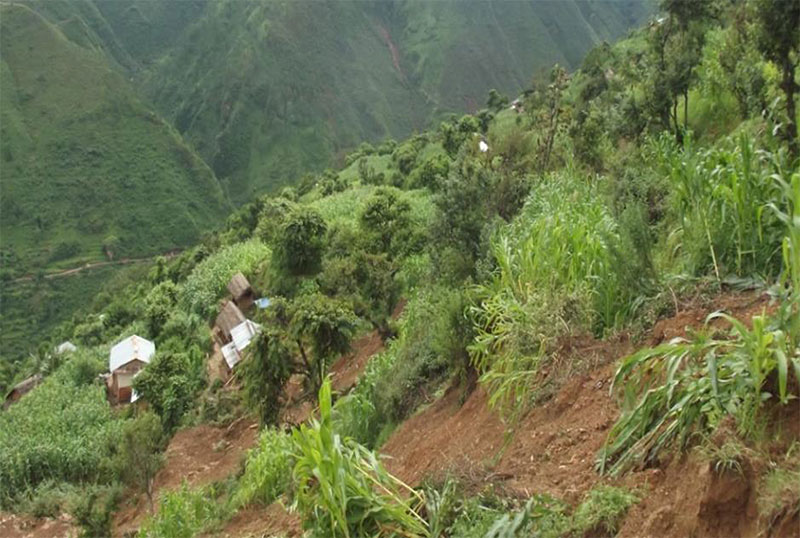 PYUTHAN, July 28: The flood and landslide victims have not received relief materials in the district over procrastination of the District Disaster Rescue Committee (DDRC).

A meeting of the DDRC was held only on Wednesday morning even though the landslides wreaked havoc in the district due to incessant downpour since Monday.

A rescue team deployed following the meeting had not reached the incident site until late Wednesday night.

The relief materials are said to be distributed only on
Thursday morning even though the team reached the hardest hit Phopli VDC on Wednesday night.

According to Chief District Officer, Janakraj Panta, the relief materials could not be transported to the incident site due to inaccessibility of road. Panta is heading for Phoplu VDC only today.

As many as 24 people were killed while over 150 families have been displaced by the landslides  so far.

Preparations are underway to take the relief materials to the incident site in a helicopter as the VDC is inaccessible by road.

The victims complain that a team of local administration reached the incident site only three days after the incident.

The victims are taking shelter at schools and cowsheds of neighbors.

The villagers are facing a dire crisis of clean drinking water.

Wards including Gatina, Bhirkuna, Charibang, Andheri of Phopli VDC have been hit hard. Over 150 families have been displaced by the landslides.

As many as 37 people were killed while six people are  still missing due to landslides and floods in Pyuthan district.

NUWAKOT, Dec 28: Huge amount of relief materials meant for the earthquake victims remained stored in a warehouse in Bidur while... Read More...

CHAUTARA, July 13: Three years after the calamities, the victims of Jure landslides in Sindhupalchowk district have received the relief... Read More...