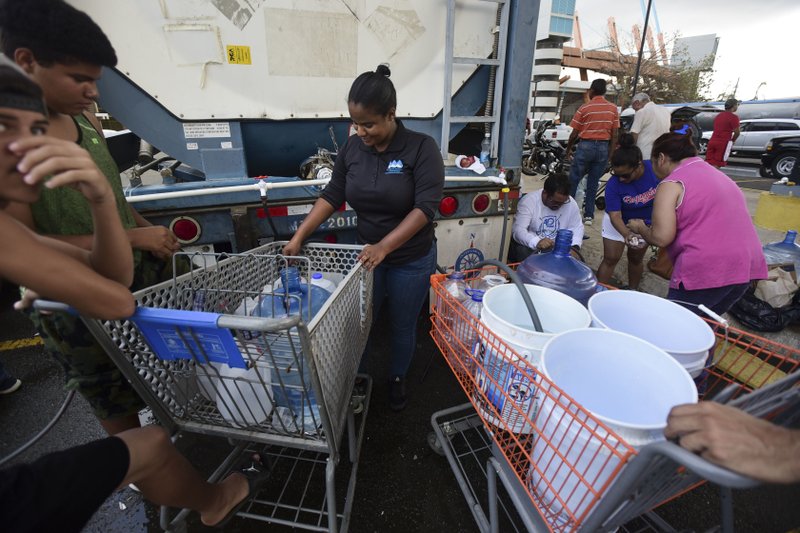 PUERTO RICO, Sept 29: The Trump administration declared Thursday that its relief efforts in Puerto Rico are succeeding, but people on the island said help was scarce and disorganized while food supplies dwindled in some remote towns eight days after Hurricane Maria devastated the U.S. territory of 3.4 million people.

President Donald Trump cleared the way for more supplies to head to Puerto Rico by issuing a 10-day waiver of federal restrictions on foreign ships delivering cargo to the island. And House Speaker Paul Ryan said the Federal Emergency Management Agency’s disaster relief account would get a $6.7 billion boost by the end of the week.

“It is really a good news story, in terms of our ability to reach people,” she told reporters in the White House driveway.

Outside the capital, San Juan, people said that was far from the truth.

“I have not received any help, and we ran out of food yesterday,” said Mari Olivo, a 27-year-old homemaker whose husband was pushing a shopping cart with empty plastic gallon jugs while their two children, 9 and 7, each toted a large bucket. They stood in line in a parking lot in the town of Bayamon near the hard-hit northern coast, where local police used hoses to fill up containers from a city water truck.

“I have not seen any federal help around here,” said Javier San Miguel, a 51-year-old accountant.

Sen. Bill Nelson, a Florida Democrat, called for the U.S. military to immediately provide security and distribution of aid in remote areas. “As was said after Hurricane Andrew: ‘Where the hell is the cavalry?’” he said in a statement.

The U.S. military was sending a three-star general to Puerto Rico to help direct the hurricane response. Lt. Gen. Jeff Buchanan, commander of U.S. Army North, was set to arrive Thursday to assess the situation so that the military can provide the highest possible level of support, Northern Command spokesman John Cornelio said.

In the town of San Lorenzo, about 40 miles west of the capital, people walked through calf-high water to get supplies because the bridge over the Manati river outside town was washed away in the storm.

San Lorenzo residents are collecting spring water to drink and taking turns cooking food for each other because residents are running low on basic supplies.

“Just like God helps us, we help each other,” said resident Noemi Santiago, weeping. “Here one person makes food one day, another makes it the other day, so that the food that we have goes further.”

FEMA, which is leading the relief effort, has sent 150 containers filled with relief supplies to the port of San Juan since the hurricane struck on Sept. 20, said Omar Negron, director of Puerto Rico’s Ports Authority. He said all the containers were dispatched to people in need but private aid supplies have not reached Puerto Rico.

He said the Trump administration had focused more on making a good impression on members of the media gathered at San Juan’s convention center than bringing aid to rural Puerto Rico.

“There are people literally just modeling their uniforms,” Melendez said. “People are suffering outside.”

Trump and his advisers defended the administration’s response to the hurricane, which destroyed much of the island’s infrastructure and left many residents desperate for fresh water, power, food and other supplies.

“The electric power grid in Puerto Rico is totally shot. Large numbers of generators are now on Island. Food and water on site,” Trump tweeted early in the day.

“I don’t wait,” he said when asked whether federal officials helped with distribution.

In the nearby fishing town of Catano, authorities said they would open a distribution point over the weekend to hand out food and water, nearly two weeks after the hurricane hit.

The Department of Homeland Security’s acting administrator of the region that includes Puerto Rico said distribution had been hampered by the destruction of roads and bridges, which makes it hard to get supplies to those in need.

“In addition to building that first line of the supply chain, we are also rebuilding the entire distribution system ... how we’re going to deliver commodities and resources to the people of Puerto Rico,” acting administrator John Rabin told reporters in San Juan. “We have often had to recreate the system in order to deliver food, water and commodities throughout the island.”

The House speaker announced that the FEMA’s disaster relief account would get “a huge capital injection” of $6.7 billion by the end of the week to help Puerto Rico recover. Ryan noted that Trump had waived a matching funds requirement, which means the cash-strapped island won’t have to contribute to the initial costs of the federal assistance. The Wisconsin Republican said he expects the Trump administration to send Congress a request for a long-term recovery package once damage assessments are conducted.

“We will quickly act on that request,” Ryan said.

The Trump administration initially said a waiver was not needed for Puerto Rico because there were enough U.S.-flagged ships available to ferry goods to the island.

PARSA, July 22: Those injured in the Madhes movement have accused Province 2 government of discrimination in handing out relief... Read More...

Los Angeles: Hollywood actor Sandra Bullock is the latest celebrity to lend aid to the victims of Hurricane Harvey in Texas. Read More...

Anjan is making Nepal visible in Israel
16 hours ago

Anjan is making Nepal visible in Israel
16 hours ago