Provinces no better than center 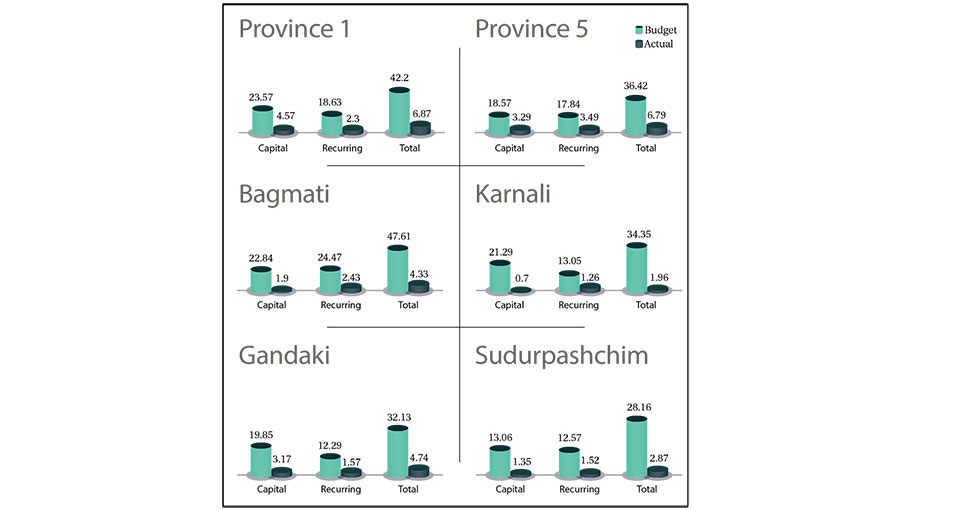 KATHMANDU, Jan 19: The expenditure of provinces remained at around 12 percent in the first half of the current fiscal year 2019/20, indicating poor performance by the provincial governments to implement their budgets.

According to the data compiled by Republica from the financial comptroller’s provincial offices, the cumulative total spending of six provincial governments stood at Rs 27.56 billion, or 12.48 percent. These six provinces have presented budgets totaling Rs 220.87 billion for the current fiscal year 2019/20.

The data from Province 2 about its mid-term expenditure progress was not immediately available.

The under-spending by the provincial governments mirrors the malaise which has long plagued the federal government.

Even the federal government has been able to spend only one-fourth of its total budget as of January 14 out of a total allocation of Rs 1,532.97 billion, according to the Financial Comptroller General’s Office. The mid-term capital expenditure stands at 14.31 percent of Rs 408 billion while the federal government spent 32.35 percent of the budget allocated for recurrent expenditures (Rs 957.1 billion).

Senior officials of the provincial governments blame lack of staff, absence of implementation mechanisms including spending units in the provinces and disputes with the federal government on the jurisdiction of various projects during the transition to the fiscal federalism for the weak implementation of the budget.

“As it took us time to establish offices after carrying out an Organization and Management Survey, the budget could not be spent in line with the plan,” said Bimala KC, the spokesperson for the Karnali government. “We will show the progress by executing the budget fully in the remaining six months,” said KC, who is also the Minister for Land Management, Agriculture and Cooperatives of Karnali province.

Stating that the spending is higher than that of the last fiscal year, they also claim that they will make a ‘significant’ progress in the remaining six months of the current fiscal year.

“There has been significant physical progress which is not reflected in the figures due to delay in the payments made to the contractors. The spending is higher than that of the last fiscal year,” said Jhapat Bahadur Bohara, Sudurpashchim Province’s Minister for Economic Affairs and Planning. “This year, there will not be spending only in the last month as has been the case in the previous years,” he added.

With 18.64 percent of progress, Province 5 is the top performer among the six provinces. Karnali’s spending is the lowest with the province being able to spend only 5.7 percent of its total budget.

Experts say the poor budget execution is a ‘national shame’. “There is no excuse for either the federal government or provincial government for the weak spending. The governments are stable. Its the second fiscal year for the provincial governments. There is adequate resource as well as mechanism and staffers in the provinces,” said Khim Lal Devkota, an expert on fiscal federalism. “It is accountability, service delivery and performance that are lacking,” added Devkota, who was also the vice chairperson of the planning commission of Bagmati Province.

(With inputs from provincial bureaus)

KATHMANDU, Oct 20: The National Association for Rural Municipalities in Nepal (NARMN), an umbrella organization of local bodies in the... Read More...

KATHMANDU, July 21: Constraint of resources and lack of planning continue to hit the rescue, relief and rehabilitation works as... Read More...

KATHMANDU, June 17: Provincial governments have brought budgets of a total size of Rs 259.57 billion for the upcoming fiscal... Read More...