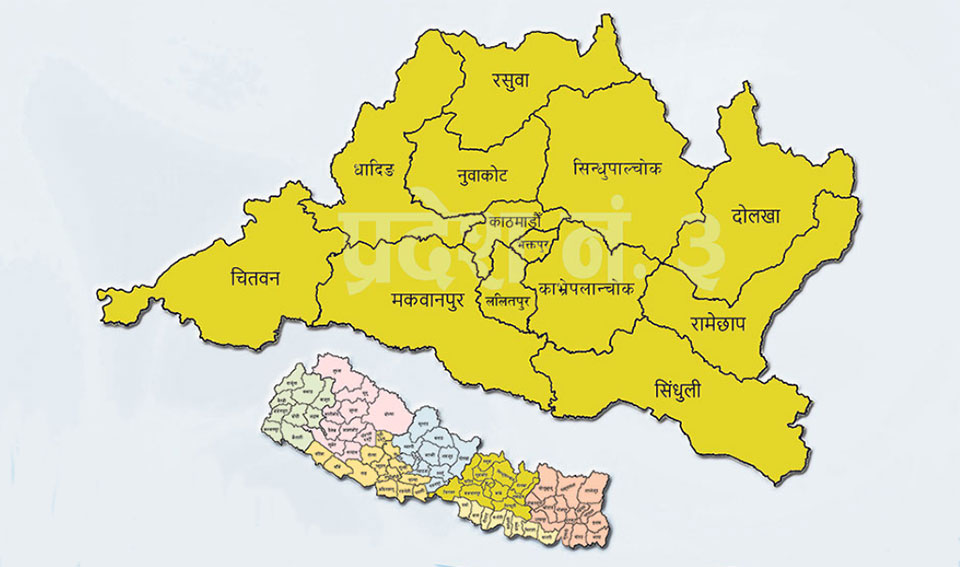 MAKAWANPUR, Jan 13: Almost two years after the provincial government was formed in Province 3, it has been named as ‘Bagmati’ and Hetauda has been fixed as its capital.

Of the 110 members in the provincial assembly, 105 voted for picking Hetauda as the capital. A total of 108 members were present in the assembly on Sunday.

After the proposal to fix Hetauda of Makawanpur as the capital received more than two-thirds votes, Shrestha announced that Hetauda had been fixed as the capital of Province 3.

During the assembly, Sajha Bibeksheel Party leader, Ramesh Poudel had also presented a proposal, seeking Dhulikhel of Kavre to be fixed as the permanent capital, but it was rejected by an overwhelming majority, as 101 members out of 104 present in the meeting, voted against it.

Only three lawmakers of the erstwhile Bibeksheel Sajha Party Ramesh Paudel, Shova Shakya and Biraj Bhakta Shrestha were in favor of picking Dhulikhel as the capital.

According to Shrestha, the proposal to choose Dhulikhel as the capital received only three votes.

The speaker of the provincial assembly Shrestha and independent lawmaker Prem Tamang didn’t participate in the vote.

Chief Minister Poudel had tabled the proposal to fix Hetauda as the capital of the province as per sub-clause (2) of Article (88) of the constitution.

The proposal to name Province 3 was tabled by Indra Bahadur Baniya, Nepali Congress parliamentary party leader in the provincial assembly.

Meanwhile, after the name and capital of the province were fixed, a cabinet meeting was also held on Sunday itself.

KATHMANDU, Feb 10: Chairperson of the National Examination Board (NEB), Dr Mahashram Sharma has said that a law is being... Read More...

Oxygen plant to be set up at Hetauda Hospital

KATHMANDU, May 22: Preparations are currently underway to build an oxygen plant at Hetauda Hospital in order to ease the... Read More...

KATHMANDU, Nov 12: The Bagmati Clean-up Campaign, under which the sacred Bagmati River is cleaned every Saturday, entered its 183th... Read More...