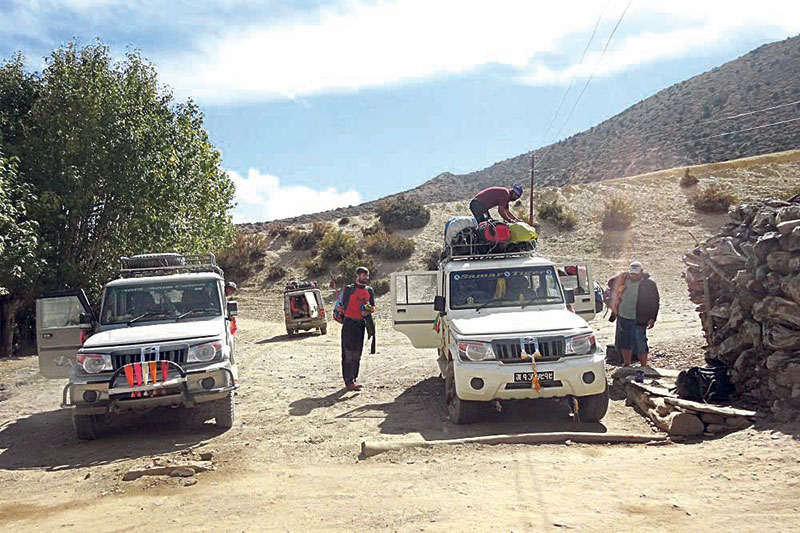 POKHARA, June 26: The government is set to upgrade the road section from Jomsom to the Nepal-China border Korala. Necessary process for the upgrading of the track is underway. According to Road Division Office, Baglung, invitation for bids for the purpose has been issued and selection of construction companies will follow as soon as the bidding process is completed.

“The upgrades are expected to take around two years to complete,” stated Rajesh Prasad Poudel, the division’s chief. “We had called for tender from interested contractors for upgrading all the seven sections of the road,” he added.
The total length of the seven section of the Jomsom - Korala road section is 110 kilometers. The division office has already selected three companies for three section of the road.

“We are presently short listing eligible companies from among the bidders. We have selected three contractors and signed contracts with them for their respective sections. Process for selecting the remaining is underway,” Poudel informed.

The road division had prepared Detailed Project Report (DPR) of the road few months ago. The report estimates total cost of the project around Rs 4.1 billion. Contracts for the construction have been prepared on the basis of the epartment’s DPR. He said that the government itself is investing for the project.

“The upgrade aims to make a two-lane gravel road with a total width of nine meters, excluding the border,” Poudel said. Blacktopping of the road will be done only after Nepal and China engage in long term trade through the route, he added.  “The road will be black topped once the need arises. This would be possible when huge number of vehicles would ply through this road. Long term trade between Nepal and China would call for that,” Poudel said.

He claimed that even graveling of the road is expected to bring respite drivers and others that commute through it. Among other things, the upgrade is expected to adjust turnings on the highway. “Presently some turnings on the road have not been properly built and sometimes are not at appropriate places. This will be fixed during the upgrades. This will ensure that the road, when upgraded, is of good standard.”  Along with the turnings, the highway will get five new concrete bridges. Their construction is expected to conclude within a year, he informed.

To expedite the upgrade, the division has demanded 300 million from the Finance Ministry in this fiscal year. “We are all prepared to start the implementation process. Once the ministry releases the budget, the contractors would be able to start the upgrades. However, if the ministry delays, the project would certainly get delayed,” said Poudel, adding that delays would create additional hassles in the implementation process besides incurring additional costs for completing the project.

“Climatic condition in the area is expected to slow down the construction during some months of the year. The DPR has considered such delays. The ministry has to release the budget on time to ensure that the project starts and completes on time,” he further said.

Heavy rain, snowfall are basically seen as hindrances in this region when it comes to development works. Along with such natural causes, other factor for sluggish development in the area is lack of will power and timely intervention from stakeholders.

An instance of such sluggishness is the Jomsom - Langthang road section. This road section, even after seven years, has not been completed. A hard rock area along the Samer - Viyana hill section of the road had obstructed the road from becoming easier for transportation until Nepal Army blasted it last year.

Surya Sunuwar, President of Association of Mustang Bus and Jeep Entrepreneurs, informed despite seven years of work on the road, vehicles ply through the road with utmost difficulty. “It’s still very dangerous to cross through Samer- Viyana road section. Though NA’s intervention made it lot easier, there is still a lot to do,” he said.

He further informed that around 23 kilometer of road section between Jomsom and Chhusang is the busiest section. “Huge number of jeeps, car ply through the road section though it’s risky,” he said adding vehicles have not been able to get across Chaile due to lack of bridge over the Kaligandaki River.

BHAKTAPUR, September 2: The workers at the government offices in Bhaktapur have started registering their attendances in three municipalities of... Read More...

KATHMANDU, Dec 12: A group of medical doctors has urged the government to cancel the process initiated for providing affiliation... Read More...