Prince Harry and actress Meghan Markle to wed next year 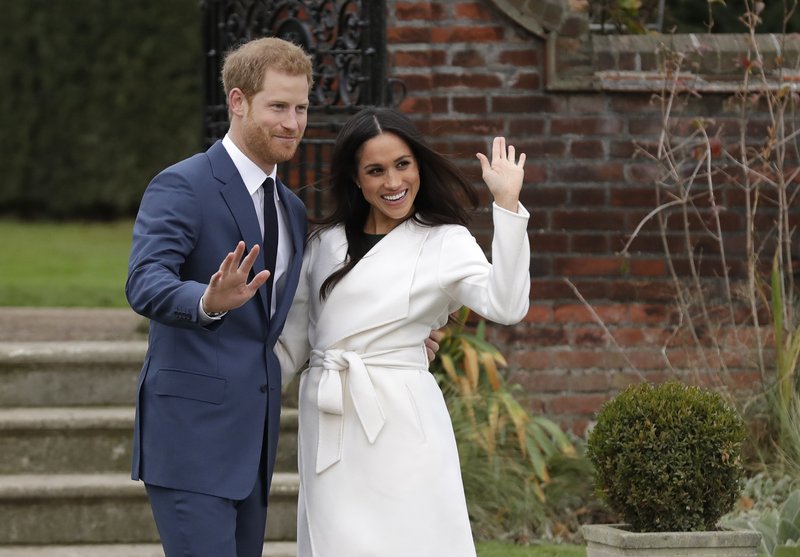 Palace officials announced Monday that Prince Harry is engaged to Meghan Markle, confirming months of rumors that the couple was close to tying the knot.

“We are very excited for Harry and Meghan,” they said in a statement. “It has been wonderful getting to know Meghan and to see how happy she and Harry are together.”

The announcement means another grand royal wedding is in the offing — the first since William and Kate married in 2011.

In some ways, Markle — a mixed-race American raised in California, an outspoken full-time actress, and a divorcee — makes a surprising addition to Britain’s monarchy.

But the institution has moved on with the times, and the romance between Markle and Harry — who has repeatedly stressed his wish to lead as “normal” a life as he could — has a decidedly unstuffy, modern feel to it.

Markle, best known for her role as an ambitious paralegal in the hit U.S. legal drama “Suits,” surprised many when she shared her feelings for Harry in a September cover story for Vanity Fair. Asked about the media frenzy surrounding their courtship, the 36-year-old said: “At the end of the day I think it’s really simple ... we’re two people who are really happy and in love.”

Describing Harry as her “boyfriend,” Markle said that while she expected that she and Harry would have to “come forward” about their relationship at some point, the two were just a couple enjoying time spent with each other.

“Personally, I love a great love story,” she said.

Harry — once known for his “bad boy” antics, including being photographed playing strip billiards in Las Vegas — has largely won over the British public with his winning smile, his military career and his devotion to charities aimed at helping disabled veterans and other causes.

The 33-year-old prince recently won praise for his work campaigning for more openness about mental health issues. Speaking candidly about his personal struggle to cope with the loss of his mother, Princess Diana, when he was only 12, he encouraged others to talk about their own problems rather than keeping them bottled up inside.

Markle’s Vanity Fair interview broke new ground. It is unusual for a royal love interest to speak so publicly — and candidly — before becoming engaged. Harry’s past reported girlfriends all shied away from the media limelight, and his sister-in-law, formerly known as Kate Middleton, stayed silent until she and Prince William gave a formal televised interview at Buckingham Palace after their engagement became public.

But then, unlike some other “commoners” romantically linked to Britain’s royals, Markle is no stranger to media exposure and the world of show business.

The actress’s most successful role is the feisty Rachel Zane in the TV legal show “Suits,” now in its seventh season. Her career has included small parts on TV series including “Fringe,” ″CSI: Miami,” ″Knight Rider” and “Castle,” as well as movies such as “Horrible Bosses.” Outside of acting, Markle founded a lifestyle blog called TheTig.com (which closed down in April without explanation) and has lent her celebrity status to humanitarian causes.

She has campaigned with the United Nations on gender equality, written in Time magazine about girls’ education and the stigma surrounding menstruation, and has traveled to Rwanda as global ambassador for the charity World Vision Canada. She has described how her mother took her to the slums of Jamaica to witness poverty first-hand, said experiences like that shaped her social consciousness and charity work.

To some degree that mirrors the experience of Harry, who was also inspired by his mother’s humanitarian work and embraced the types of charities Diana favored in the final years of her life before her 1997 death in a Paris car crash.

Harry and Markle held hands for their first official appearance together in September in Toronto at the Invictus Games, a sporting event for wounded service personnel that Harry spearheaded.

Both were dressed casually in jeans, smiling and chatting as they arrived for a tennis match. Several days later, Harry was photographed kissing Markle on the cheek as he joined the actress and her mother in a luxury box to watch the event’s closing ceremony.

Markle said she met Harry through friends in London in July 2016, and that they had been dating quietly for several months before the romance hit the headlines.

The media attention then became so intense that Harry took the unusual step of officially confirming the romance in order to warn the media off. In a strongly worded statement issued through the palace, the prince pleaded for reporters to stop intruding on his girlfriend’s privacy. He condemned “outright sexism and racism” in some online comments, and said some articles with “racial undertones” had crossed the line.

Some tabloids had alluded to Markle’s mixed-race heritage, pointing out she has an African-American mother and a white father.

Markle herself has spoken out about coming to terms with being biracial — both growing up, and in her Hollywood career.

In a March interview with Allure magazine, she said studying race at college was “the first time I could put a name to feeling too light in the black community and too mixed in the white community.

“For castings, I was labeled ‘ethnically ambiguous’,” she said.

Markle was born Aug. 4, 1981, to a clinical therapist mother and television lighting director father. She grew up in Los Angeles and now lives in Toronto.

She studied at a girls’ Roman Catholic high school before attending Northwestern University in Illinois, where she studied theater and international relations.

It wouldn’t be the first time that a British royal has married an American — or a divorcee. In 1936, Edward VIII famously abdicated after he was forced to choose between the monarchy and his relationship with twice-divorced American socialite Wallis Simpson.

In her Vanity Fair interview, Markle made clear the world’s attention on her romance did not faze her.

“I’m still the same person that I am, and I’ve never defined myself by my relationship,” she said. “The people who are close to me anchor me in knowing who I am. The rest is noise.”