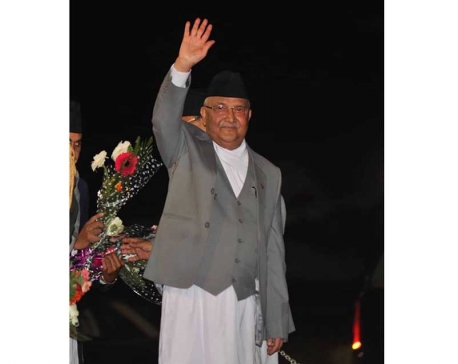 Oli is scheduled to address the plenary meeting of the Centenary Session of ILO on June 10.

In his address, Prime Minister Oli will highlight, among other things, the changing dynamics of the world of work and share with international community the efforts of Nepal to realize the agenda of prosperity and ensure equality, social justice and social security to our people, according to a press statement issued by Ministry of Foreign Affairs on Saturday morning.

On the sidelines of the session, Oli will hold bilateral meetings with the Vice President of the Republic of Turkey, Fuat Oktay and Prime Minister of Norway Erna Solberg. He will also have a meeting with Former President and Federal Councillor and Head of the Federal Department of Home Affairs of Switzerland Alain Berset.

Oli will attend luncheon being hosted by the Director General of the ILO in honor of the participating Heads of State and Government.

Concluding his visit, Prime Minister Oli will leave for the United Kingdom on June 10. He will address as the Guest of Honour at Oxford Union of the University of Oxford on the theme of ‘Peace, Democracy, and Development’ and highlight Nepal’s journey of peace and democracy and our efforts to achieve prosperity.

While in the UK, Prime Minister will hold official bilateral talks with his British counterpart Theresa May on June 11 at 10 Downing Street.

During his stay, Prime Minister Oli will also attend a reception to be hosted by the All Party Parliamentary Group on Nepal (APPG) and British Group of Inter-parliamentary Union (BGIPU) at the British Parliament. He is also scheduled to give an interview to the BBC World Service.

Oli will be felicitated by Nepal-France Friendship Group at the French National Assembly. He will also interact with the representatives of the business community.

On June 15, Prime Minister Oli will interact with the Europe-based Nepali ambassadors and give instructions on various matters.