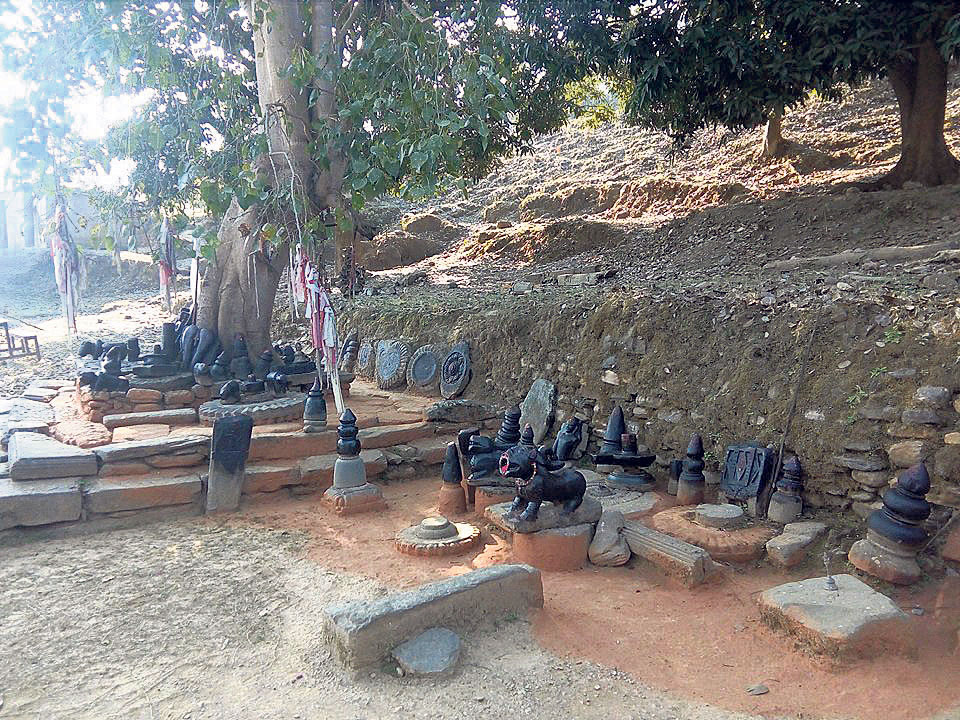 This file photo shows idols on the premises of Padukasthan Temple of Dullu Municipality – 9 in Dailekh district. Some of the priceless idols were stolen on Saturday night. Photo: Govinda KC/Republica

DAILEKH, Dec 4: Invaluable sets of idols made of stone, bronze and several other metals have been stolen from Padukasthan Temple of Dullu Municipality – 9 in Dailekh district.

According to the main priest of the temple, Yogi Devinath, the idols were stolen on Saturday night.

"They were just there till the time I went to sleep. In the morning, some idols were missing," he said. "They were invaluable."

Yogi reported that two idols of lord Ganesh weighing 8 kg and 2 kg each have disappeared.

Similarly, a statue of tiger and a bell have also been taken away.

"Some of them were made of precious metals while others were made of stones. They were weighty," he said, adding that he informed the police as soon as he noticed the idols missing in the morning.

The temple is widely visited by locals as well tourists and the idols were left openly on the premises. Locals suspect that a network of mafia might be behind the theft. Of late, exploration of petrol is going on near the temple. This has pulled additional crowd to the temple.

"This had to happen one day or the other. The idols were kept out under the open carelessly," said a local Madan BK. "Smugglers might have identified the best and the most invaluable idols and taken them away. Due to the petrol exploration, a huge number of Chinese have also been visiting here," he added, suspecting involvement of foreigners behind the incident.

Following the theft of the idols, a team of police reached the venue immediately after being informed. The team led by police inspector Hikmat Bahadur Bohora has started investigation.

Earlier during the Maoist insurgency, a precious statue had been stolen from the same temple. The idol has not been recovered yet. "That was a statue of lord Indra and said to be very huge and priceless," BK said.

Mayor of Chamunda Bindrasaini Municipality Surya Bahadur Shahi meanwhile stressed on the need to preserve the heritage. "We must admit that we have not been able to preserve such precious idols," he said, adding that the Department of Archeology has not shown enough interest 'in preserving the idols'.

He feels that the department discriminates against other places from Kathmandu. Although it is the duty of the department to preserve all stuffs of archeological importance, it hardly shows it presence beyond Kathmandu, he alleged.

"The department is supposed to identify and categorize such idols. And then take steps to preserve them. But the department does not seem concerned about idols anywhere else than in Kathmandu," he added.

DAILEKH, Nov 23: Amar Bahadur Thapa of the ruling coalition has won in Dailekh-1. Thapa, who is also the Karnali... Read More...

Woman in labor rescued by locals in Dailekh

DAILEKH, Aug 22: Women of Bhairabi Rural Municipality in Dailekh rescued a pregnant woman who was suffering from labor in... Read More...

DAILEKH, Nov 28 : Two persons killed and six others were injured when a jeep met with an accident at... Read More...

50,000 metric tons of wheat required to address shortage
19 minutes ago